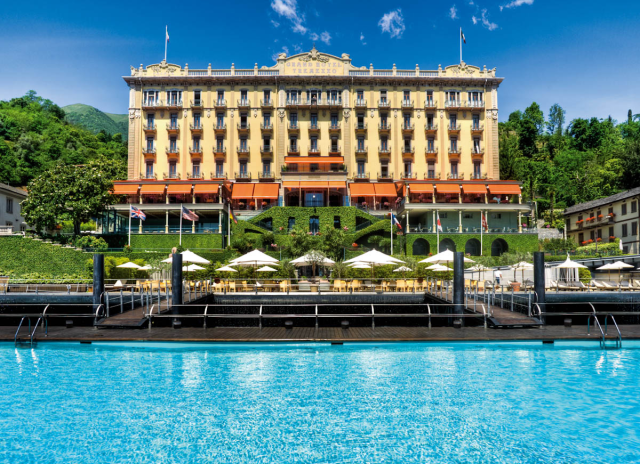 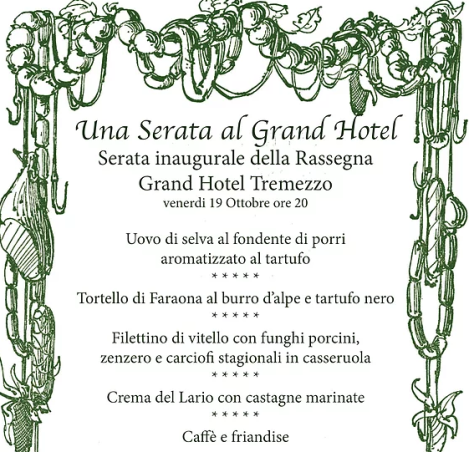 Local cuisine celebrated at the inauguration event at the Grand Hotel Tremezzo.

This annual festival has now grown since its relaunch to include sixteen separate events held from mid-October to 24th November. The festival originated in the 1950s as one of the initiatives of a particularly enterprising local dentist, Gian Giuseppe Brenna. As the delegate for the Como area to the Accademia Italiana della Cucina, Brenna wished to ensure that the local traditions of hospitality and culinary excellence be preserved and celebrated. It has now been revived under the sponsorship of the newly formed local council which incorporates the previously independent towns of Tremezzo, Lenno, Ossuccio and Mezzegra – an area that encompasses the heart of local olive oil production and possibly the most upmarket tourist locations on the western shores of the lake.

The current mayor of Tremezzina, Mauro Guerra, partly sees the festival as an opportunity to celebrate what the new unified comune of Tremezzina has to offer but also to reinforce the values and pleasures of hospitality – and to celebrate and advertise these to the world at large. Five establishments (including a Bed and Breakfast, Wine Bar and three restaurants) offer a menu based on local cuisine throughout the length of the festival. 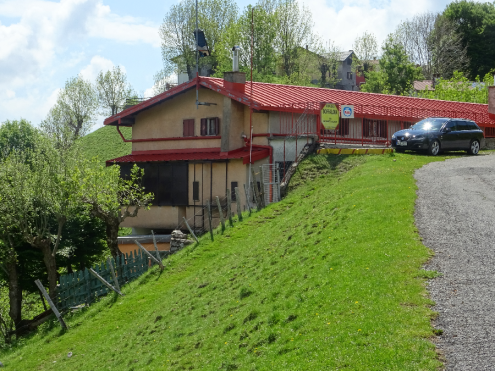 Rifugio Boffalora, famous in partisan history as the location where Capitano Ricci gathered his partisan force prior to his ill-fated attack on the Albergo Lenno.

A further ten establishments (restaurants of renown as well as the Aquadulza brewery and the Rifugio Boffalora) offer special menus on a single occasion or over a specific short period. Details about the individual offers including price and the different establishments are available on the festival’s website. 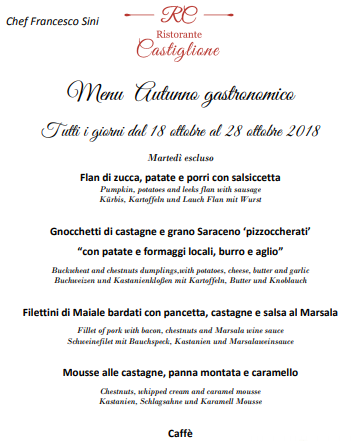 If imitation is the greatest form of flattery, Tremezzina will be delighted that their initiative is being duplicated in the Val D’Intelvi, that beautiful valley that links Lake Como to Lake Lugano from Argegno to Porlezza. This is the inaugural year for the Rassegna Gastronomica di Valle Intelvi  which runs from 18th October to 18th November and involves twelve restaurants this time. As in Tremezzina, this festival’s aim is to celebrate local cuisine and to help preserve the local culinary tradition whilst advertising its qualities within and beyond the local area. The Val D’Intelvi used to be a favourite destination for local Italians to take a spring, summer or autumn break but the tourist industry has declined as growing prosperity has prompted the Milanese to seek more exotic holiday destinations. But the area is stunningly beautiful and its cuisine profits both from the lake-inspired dishes and the mountain alpine products. 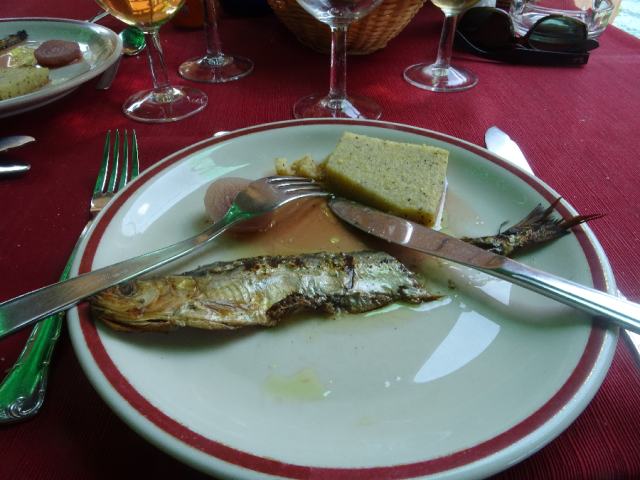 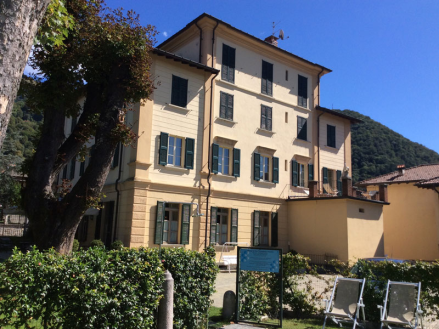 As in Tremezzina, the twelve establishments represent a good cross section of hostelries in the Valle Intelvi. However, presumably because the organisers of the festival, the Associazione OrtiCultura, do not have the same financial resources available to them, there is no single website where you can go to see what exactly is on offer. Their Facebook page lists the restaurants and states they all  offer ‘ a menu based on autumn specialities using traditional local ingredients and offered at a controlled price’. The festival runs from 18th October to 18th November.

The territories of the Val D’Intelvi and Tremezzina are both subsumed within the Province of Como and so theoretically within another gastronomic festival in October entitled GastroLario. This festival is in its first year as in the Valle Intelvi, but unlike there, the GastroLario seems to have more financial backing and is certainly much more ambitious in scope. GastroLario involves fifty eight different establishments each either offering a specifically local menu over the period from 1st to 31st October or specific ‘GastroLario’ dishes a la carte. 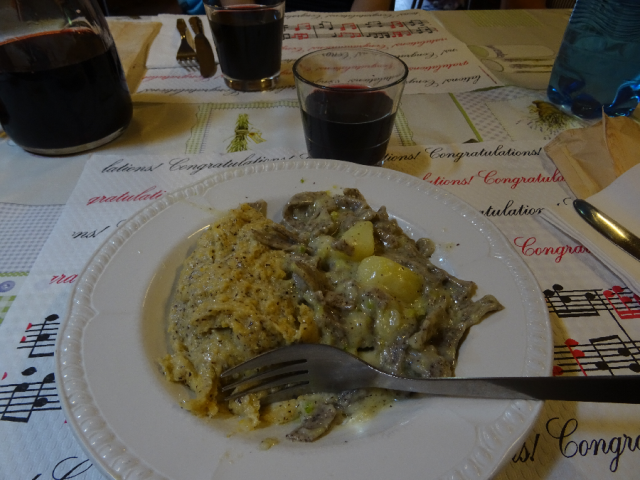 This ambitious initiative spearheaded by one of Cantu’s ex-mayors, Claudio Bizzozero, shares the same objectives as the other two food festivals running concurrently within Como Province but, with its wider geographic spread, it hopes to rehabilitate the culinary reputation of the entire province. It’s true to say that Como’s culinary tradition is perhaps overshadowed by Milan to its south and the Valtellina to the north east. 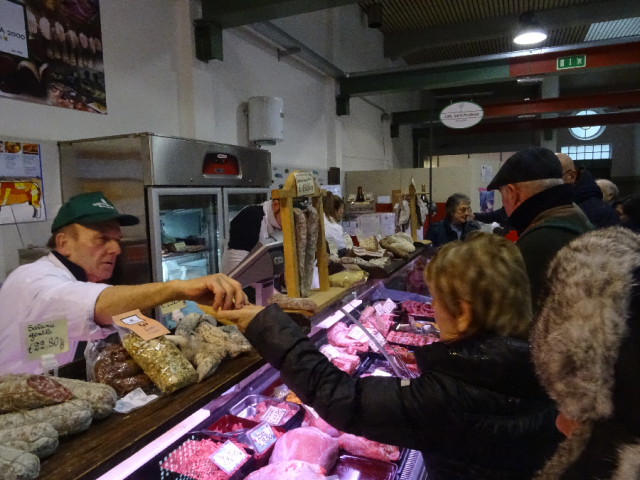 GastroLario has a comprehensive website with details of all fifty eight establishments. It does however helpfully categorise these into three distinct sections based on geographical zone. These are around the lake, amongst the hills of Brianza and finally in the mountains of the Pre-Alps. These zones neatly cover about ninety percent of the province’s geography leaving out some of the flatland of the ‘pianura’ in the south west. Each zone has its own culinary tradition based on local production and custom. Sig. Bizzozero further distinguishes the style  of each establishment within each zone with a further sub-division by three. We have ‘classic’ style where recipes follow traditional expectations or ‘reinterpretation’ style  allowing for greater creative scope or a ‘freely inspired’ style which takes creativity a step further from the starting point. 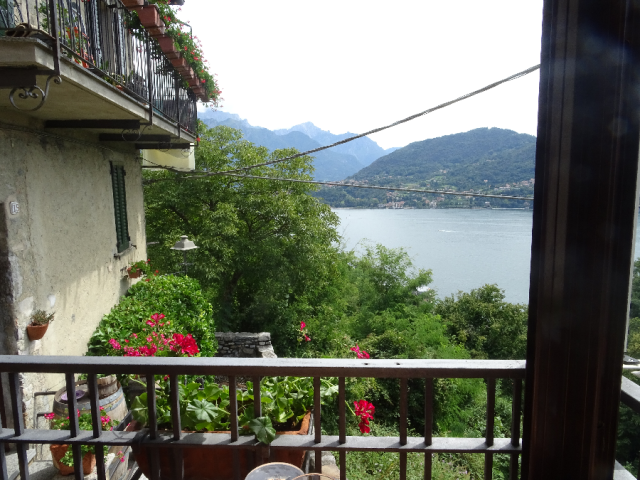 View from the terrace of La Fagurida, one of the restaurants within the Tremezzina inititiative.

GastroLario extends itself beyond the culinary experience with scope for diners to record their opinions of each offer on the website with all evaluations leading to Como’s ‘Gastronomic Oscar Night’ to be held at the end of the festival on October 31st. Additionally all the recipes from the fifty eight participants will be collected to contribute to a general repertory of Como cuisine. 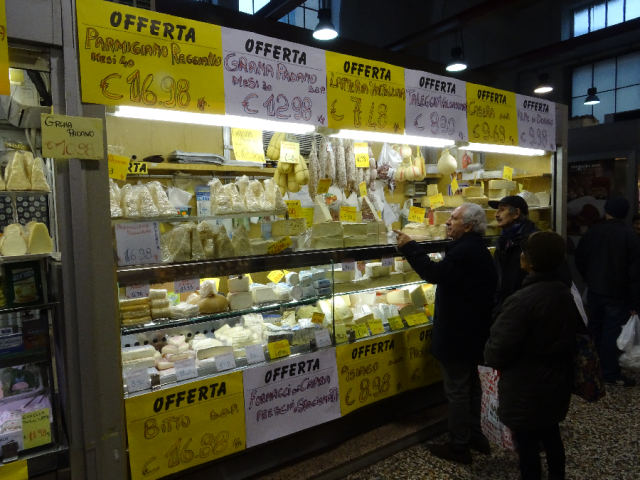 The Province of Como is spoilt for cheese with its own production matched by that from the Valtellina, Lecco and the Pianura Padana.

To my mind, the objectives of all three of these festivals are entirely laudable since all cultural aspects including local cuisine have to be made evident, recorded and reinforced so that they flourish in the face of commercial counter-trends. I hope the Lario and Intelvi initiatives also incorporate the focus on communal pleasure and the values of hospitality as made explicit in the Rassegna Tremezzina since culinary pleasures are above all, social and are always maximised when shared in good company.

I am an Englishman in Como, Northern Italy - definitely both a Euro and Italophile with an interest in modern history, walks in the hills and mountains, and food and wine. I favour 'slow' tourism alongside of 'slow' food.
View all posts by comocompanion →
This entry was posted in Culture, Events, Food, Restaurants, Uncategorized and tagged gastronomy, local produce, missoltini, Pizzoccheri, Polenta, tremezzina, val d'intelvi, Valle Intelvi. Bookmark the permalink.

1 Response to October Gastronomica: A Flurry of Food Festivals