Saturday 13th October saw the launch of the seventh annual Streetscape bringing street art to the four corners of the old town and beyond. Congratulations to Art Company for organising it and to the local authority entities who continue to support it.  I love Streetscape – it offers an opportunity for gentle criticism, an excuse to walk around the town for an artistic treasure hunt – and most of the installations do genuinely provoke thought and reflection often influenced by their temporary urban homes. Never do my personal reactions correspond in any way to the official notes displayed at each site but neither does this seem to matter – the interplay between each item of art and its urban setting sparks off reactions that are bound to be personal. The occasional dud might leave you underwhelmed but this year, duds are in the smallest of minorities. 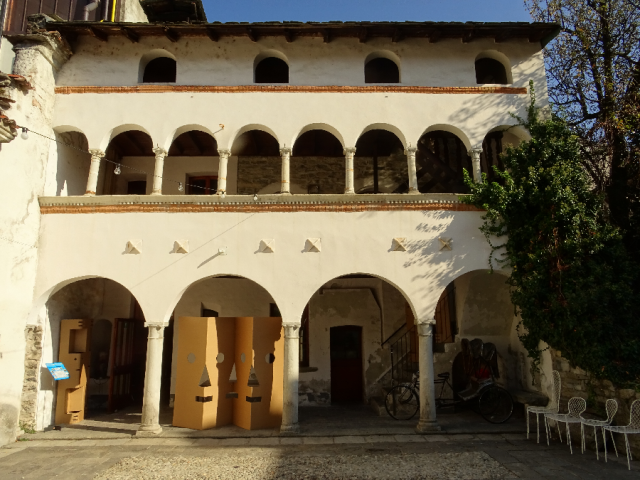 Il Chiostrino Artificiale with last year’s exhibit -an architectural gem worth taking every excuse to visit.

The purpose of Streetscape, as I perceive it, is to present art outside of a gallery thus exposing it to many more people and also, if the locations are well selected, allowing the location to influence how the art is perceived, and/or conversely allowing the work of art to create reflection on its location. But if this is the conceptual heart of street art, it is problematic since there are inherent conflicts between the desire for accessibility and security, between the notions of expendability or permanence, or between iconic or iconoclastic intent. These issues do impact the sense of commercial value and can result in the ultimate absurdity as represented at Sotheby’s auction of Banksy’s ‘Girl with Balloon’ which doubled its value by being morphed via a ‘hidden’ shredder into ‘Love is in the Bin’. No such absurdities were on show or to be witnessed in Como however street art does and perhaps always should provoke a degree of controversy. 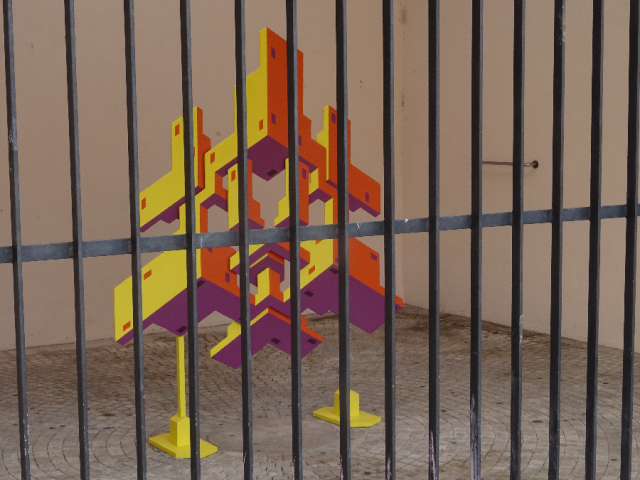 Dangerous Attraction by Rendo, exhibited within the Serre of Piazza Martinelli 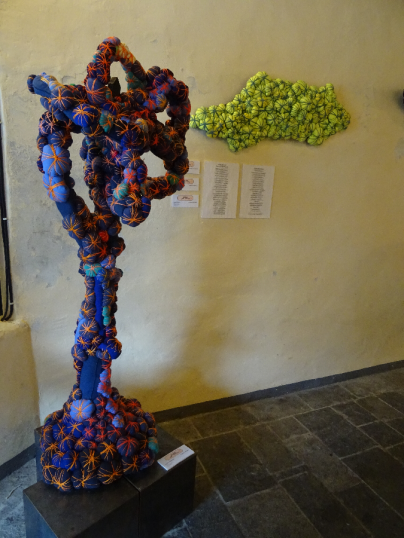 Yet the polemic remains – as the works on show become less ephemeral, security issues become more critical. This year the trend established last year of staging works within secure compounds seems to have been consolidated since six out of the nine works are to a greater or lesser degree behind locked doors. This does not necessarily diminish their impact but those seeking to view Florencia Martinez’s textile sculpture ‘Home – una casa nell’albero’ will have to ensure they time their visit with the morning opening of the Chiostrino Artificio. Difficult to see this as street art, but never mind, the Chiostrino is always worth a visit if just for its architectural beauty. And in fact there is a whole series of Martinez’s other works on display inside. 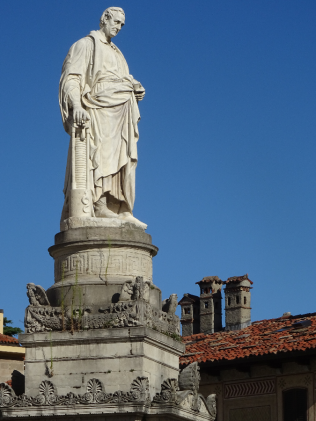 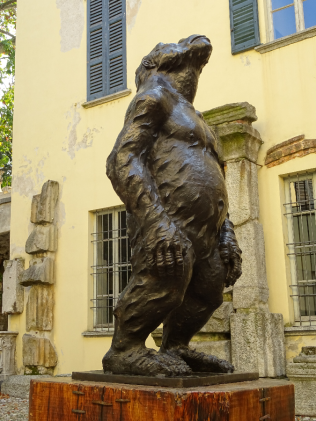 Chinese artist Lio Ruowang’s sculpture ‘Original Sin’ can be seen also out of hours through the gate enclosing the Museo Archeologico’s courtyard, but best to enter and see this work at closer quarters, positioned as it is squarely at the centre of its exhibition space. Its location made me compare this squat humanoid shape to the idealised sculptures of famous figures adorning the squares and piazzas of our cities, such as Alessandro Volta, Mazzini or Garibaldi here in Como. Equally well located in the garden courtyard of the Biblioteca Comunale is the seemingly bucolic work by Corrado Bonomi entitled ‘Roseto‘. Initially this looks like a bright red rose arbor beautiful enough to adorn the Garden of Eden – but closer inspection, only possible during opening hours, shows the vines and flowers all to be made of plastic. 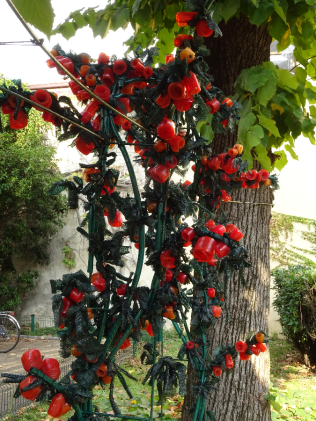 The vines and roses are made of industrial plastic parts 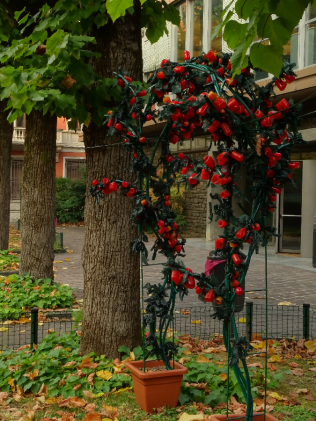 Continuing our tour of Como’s courtyards, the Pinacoteca has offered up its rather dismal courtyard space for Streetscape works over the last few years but the space is so uninspiring and confined that it usually diminishes the impact of whatever is exhibited there. Not this year, however. The monumental inflatable by Polish artist, M-City, entitled ‘Pomnik Konny’ towers high drawing the eye upwards and beyond the confined space. 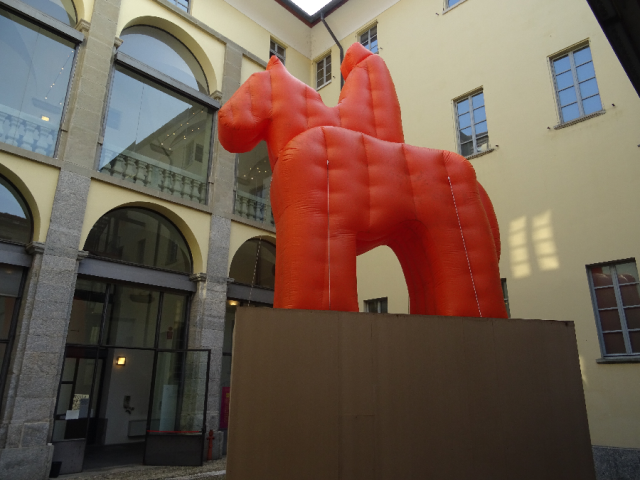 Pomnik Konny by M-City in the courtuard of the Pinacoteca Civica.

Another usually uninspiring location for Streetscape works is the enclosed shed space in Piazza Martinelli featured at the start of this article. In past years, two dimensional works have been mounted against the far wall of this shed kept secure and distant behind locked bars. This year though the work by Rendo is not only staged clear of the far wall but, through optical illusion and use of perspective, creates an intriguing two and three-dimensional ambiguity.  This seems to imbue the sculpture with a sense of repressed energy which is in turn reinforced by its position behind bars. Dangerous Attraction by Rendo – in the serre of Piazza Martinelli – two and three dimensional ambiguity.

The final courtyard setting is in Palazzo Cernezzi on Via Vittorio Emanuele, the seat of local city government. The work on display here is by Matteo Capobianco aka Ufocinque and is entitled ‘La leggenda del Lariosauro e altre storie comuni.’ At the heart of this sculpture is a representation of Lariosaurus, which actually existed as a pre-prehistoric creature (see our article Myth and Reality: Lake Monsters and Political Scandal for  the full story).

The Lariosaurus myth has more recently been reinterpreted by Como’s very own street artist, Pierpaolo Perretta aka Mr. Savethewall, who used it in a publicity stunt to draw attention to the local city council’s incapacity to resolve the issue of the redevelopment of the ex-Ticosa industrial site on the edge of Como’s historic centre. So it is entirely possible that this installation is intended as an ironic commentary on the local council’s inefficiency. If so, it either means the local council were either unaware of such an intention when granting permission for the work to be sited at the town hall, or, due to a recent change in administration, they feel confident enough to ignore it. Or I may of course have entirely mistaken the artist’s intent – such is the delightful ambiguity of street art! In any case, if we leave out the potential irony, this is perhaps one of the least successful installations with the location adding little to its impact.

Moving away from the courtyard settings, there is a very obvious big blob of black plastic in the middle of Piazza Duomo – a more open and exposed location would be hard to find. 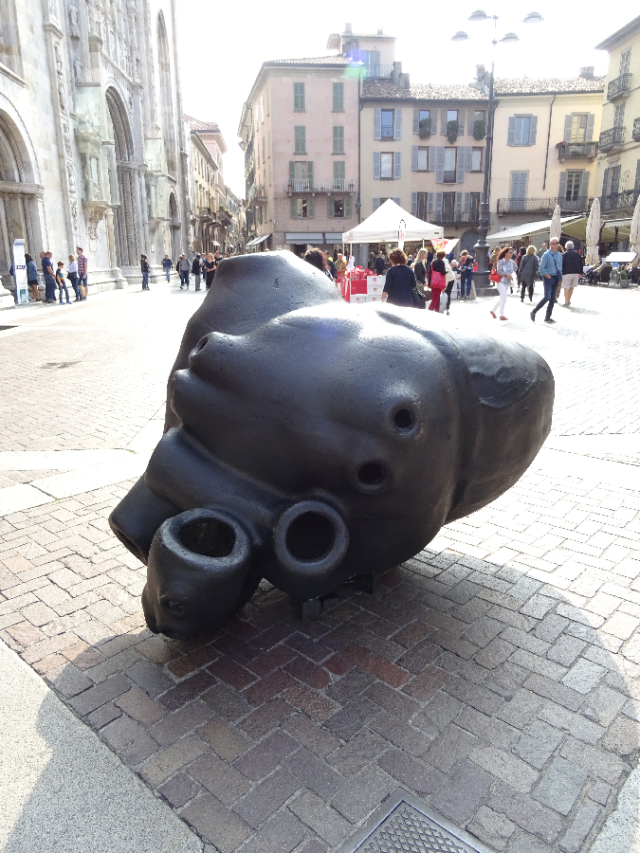 This work by Paolo Grassino and entitled Cardiaco immediately attracts attention in its anomalous setting and also by its courageous disregard for security or of threats of vandalism. In fact it seems to invite use as a massive ashtray or refuse bin. No doubt it is hard to move and almost indestructible. It is also true street art. The artist makes the original observation that when genetic engineering takes control of our bodies, the colour of the body parts will be black. As Henry Ford might have said, ‘You can have a heart in any colour as long as it’s black.’ I am sure the town council have received complaints about landing a black blob in the middle of one of the city’s finest piazzas. If so, they are to be congratulated on ignoring them. 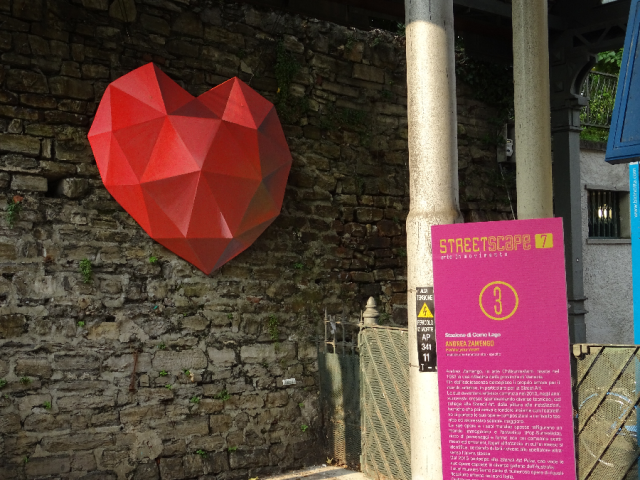 ‘Follow your heart’ by Andrea Zamengo in the Como Lago train station.

The final installation near the old town is by Andrea Zamengo in the Como Lago station. It may be more of a symbolic representation of a heart compared with the realistic black blob in Piazza Duomo but it does restore its red coloration. The title  ‘Follow your heart’  makes immediate sense of its location, and the different planes of the heart are said to represent the full diversity of those who pass through the station on their journeys that may be following their heart.

Suffering from a temporary mobility restriction, I was unable to get to the last of the open installations – Zio Ziegler’s poster installation on Via Castelnuovo. This location could well profit from something inspirational being on a featureless stretch of urban highway. The poster gets over some of those security issues since it can be reproduced and reinstalled if needs be although last year’s poster in the same location, was one of the first installations that did not last the length of the exhibition. In terms of longevity, it was great to see that the ‘unofficial’ entry to last year’s Streetscape – Pierpaolo Perretta’s ‘Great Wave’ is still  in situ and remains totally unvandalised. Either through the Lariosaurus or his own installations, notwithstanding his remarkable international success over the last year, the spirit of Como’s Mr. Savethewall still pervades Streetscape. 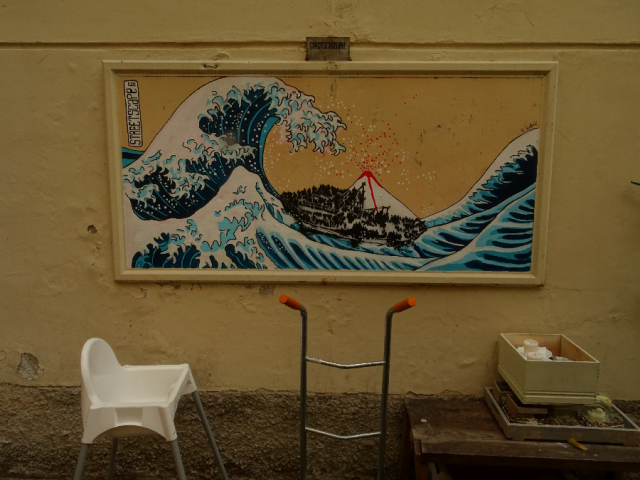 Streetscape 7 runs until 18th November and I have no hesitation in recommending all who have the opportunity to take a walking tour around the city to see the art. You may well cross paths with others on the same venture. Alternatively if around on Saturday 20th October, there is a cycle tour of Streetscape setting out at 11.00am from the Autosilo Tribunale – a great opportunity to bring your own bike and share the artistic experience with others.

I am an Englishman in Como, Northern Italy - definitely both a Euro and Italophile with an interest in modern history, walks in the hills and mountains, and food and wine. I favour 'slow' tourism alongside of 'slow' food.
View all posts by comocompanion →
This entry was posted in Architecture, Art, Culture, Events, Places of interest, Uncategorized and tagged Chiostrino Artificiale, lariosaurus, Mr. Savethewall, pop art, Street art, Streetscape. Bookmark the permalink.