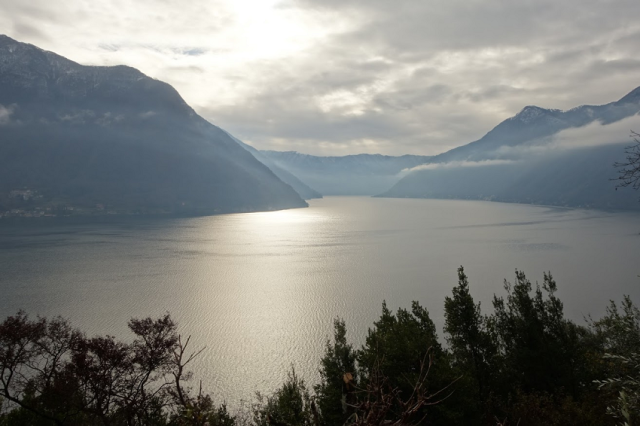 Climbing up from Argegno and looking back towards Como

The hike from Argegno to Colonno via Pigra has to be one of the most scenic routes on the western side of the lake. Climbing up to Pigra, you look back on the mountains rising up from the Val D’Intelvi. You then enjoy an easy section following the contours of the hills and crossing numerous streams until you reach the delightful alpine hamlet of Corniga. Descending from this point you have open views to the north and south of Lake Como taking in Isola Comacina, the Lavedo peninsula across to Bellagio and the tips of the Grigne mountain range behind.

Argegno is a great starting off-point for hiking in the Val D’Intelvi or for joining the Via dei Monti Lariani heading towards the north end of Lake Como. The route described here takes us from the centre of Argegno, up the mule track to Pigra and then on to Corniga to descend down the Valle della Camoggia arriving back on the lakeside at Colonno.  This walk will take you about two hours thirty minutes with an ascent of around 650 metres. Those wishing to take a longer excursion can decide to follow the path to Costone from Pigra which will lead you on to the Alpe di Colonno. From there you can descend to Corniga and on to Colonno. This extension adds a further four hundred metre climb and an additional three hours to the walk. All the paths on this route are good quality mule tracks or better and the signposting is clear and consistent.

The newly opened section of the Antica Strada Regina from Argegno to Colonno. Signposts for following the path starting from Colonno are not so clear as from Argegno.

A further option exists to follow the newly reopened section of the Antica Strada Regina which links Colonno to Argegno. This route was opened up in July of 2020. It runs above the lakefront rising at its highest point to 250 metres above the level of the lake. This option would allow you to make a round trip starting and returning to Argegno. It would add a further fifty quite arduous minutes to your walk. However be aware that the path for this section is not so well maintained or signposted  as elsewhere with some parts being both steep and narrow. Safety handrails are fortunately provided where deemed necessary. This latter extension to the walk is described in an appendix to the main article.

I travelled out to Argegno from Como on the C10 bus. On alighting in front of the Embarcadero, walk into the old town behind the main piazza and cross the Roman bridge. From here follow the cobbled road making its way up to the Church of Saint Sisinnio. We will be following signs for the Mulatteria di Pigra clearly signposted along our way and also accompanied by the white rectangular route mark with a purple stripe. 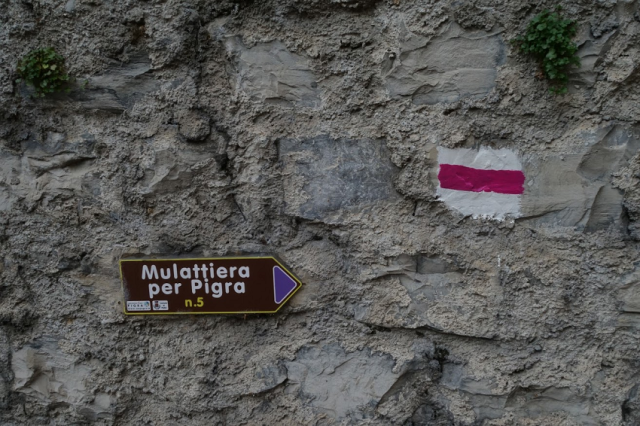 Signposting is good along the entire walk following clear well maintained mule tracks up to Pigra and on to Corniga.

It would of course be possible to follow this route in reverse starting from Colonno, passing through the alpine hamlet of Corniga and then descending down to Argegno from Pigra. However I would recommend starting from Argegno since the initial climb is on a well maintained and well signposted path with views over to San Zeno behind you. The section from Pigra to Corniga is the least onerous since it follows the contours of the hillside. When you make your way down the Camoggia Valley after Corniga, you have glorious views over Lake Como accompanying your descent.

The only time the signposting lets you down is as you enter the district of Dizzasco called Muronico above Saint Sisinnio. The path comes to a cross roads beside a chapel on your right hand side with no indication which of the three options to take. However, just continue your steady climb upwards taking the path straight ahead of you.

Pigra is very quiet during the winter months although the cable car to and from Argegno is still open. Here the hens feel free to wander over the roundabout without fear.

You will know when you are approaching Pigra when you start to see that the terracing is being maintained and the hillside opens up for agriculture. The south-facing alpette  must offer fertile grazing ground over the summer months but the town is very quiet over winter with hens free to roam around the town’s only roundabout just up from the cable car station.

As you leave Pigra following the sign for Corniga and Alpe di Colonno, you pass this chapel on your left.

Pigra is definitely a hikers’ crossroads with trails leading off towards San Fedele Intelvi, Costone and Corniga as well as a sharp right turn to a panoramic beauty spot. All these routes are marked out on a noticeboard just by the hen’s roundabout. For our chosen route, follow the directions marked out for Alpe di Colonno. This path leads to Corniga where we then start our descent for Colonno. If you want to take the longer route, follow the signs for Costone from where you will pick up the military road to Alpe di Colonno and then descend down to Corniga. You will know you are on the direct path to Corniga when you pass the Chapel dedicated to the Madonna del Soccorso as you leave Pigra.

The path now follows the contours of the hillside passing a number of mountain streams before finally crossing the largest, the Camoggia, and making your way on the stream’s northern banks towards Corniga. As you enter Corniga, you look down past the stone roofs of this delightful alpine hamlet to the southerly expanse of Lake Como beneath you.

The alpine hamlet of Corniga, well-maintained and partly occupied even in winter.

During the winter months Corniga is very quiet but not entirely deserted. It is in a splendid location and surrounded by south facing fertile alpette. Most of the stone cottages look well maintained although there are still some that have not stood up to the test of time. The mule path we will follow down to Colonno is passable in a small 4×4 vehicle but communications cannot be easy.

Leaving Corniga for the descent to the lake at Colonno. Beautiful views of the lake along the way.

As you enter Corniga you will see the continuation of the path we have followed pointing to Alpe di Colonno. At this point, we turn right to start our descent on the mule path to Colonno.

The path continues to be well maintained along its entire length with steps cut into it in some of its steepest sections aiding the descent. At a certain point along the way, you will hear and then get glimpses through the trees of a magnificently long waterfall. Its a pity that a full view isn’t possible. The Camoggia makes a very rapid descent towards the lake and there is a much better opportunity to view another of its waterfalls if you decide to take the newly-opened footpath from Colonno back to Argegno.

As you get closer to the lake you will note more terracing supporting olive groves. This area all around Lenno is the centre for olive oil production on Lake Como.

Olive groves as you get closer to Colonno. 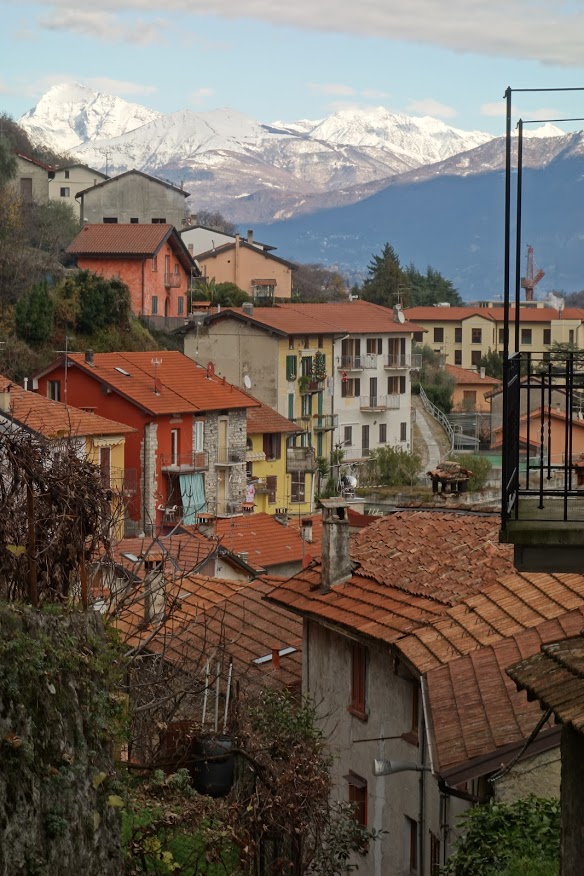 Colonno does not look so appealing seen from the main road but all changes when you venture into its labyrinthine streets.

When you arrive in Colonno you can either decide to take the bus back to Como or take the newly opened continuation of the Antica Strada Regina but bear in mind that this path is a lot more challenging than those encountered previously on the walk. It does however offer the only reasonable alternative to making your way back to Argegno since the main road has no pavement and is in no way suitable for pedestrians. 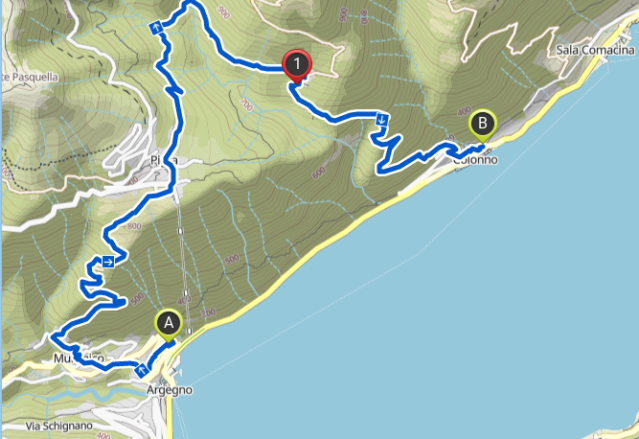 Pigra is at the highest point on the walk and so the initial climb is sharper than the descent to Colonno.

Appendix: Walking the Antica Strada Regina from Argegno to Colonno

The Camoggia waterfall on the Antica Strada Regina near to Colonno.

The Antica Strada Regina is an ancient walkway linking Italy to Switzerland and extending from Como to Sorico on the western shore of the lake and intersecting with the Via Spluga and Via Francisca. In some parts of the route, the ancient path has been incorporated into the present day main road and is no longer suitable for hiking. This was the case from Brienno, passing through Argegno and on to Colonno where the steep mountainsides did not allow for any alternative path above the lakefront. However a hiking path was opened up this summer to open up a section from Argegno to Colonno. Carving out this path required some ingenuity in avoiding private property and fenced off areas of land. As a result, the route can be challenging and does actually have to rise to over 250 metres above the level of the lake in its bid to avoid these obstacles. The main reward for those braving the path comes as you near Colonno since it takes you to the foot of the Camoggia valley with its glorious waterfall.

Summary Argegno to Colonno on the Antica Strada Regina 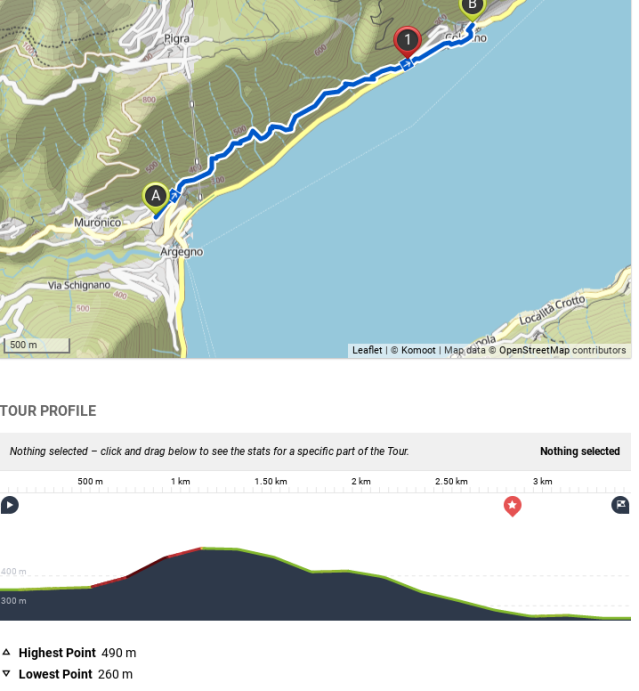 This profile follows the start of the route just north of the Saint Sisinnio church in Argegno. The Camoggia waterfall is marked by the number 1.

Other walks along the Antica Strada Regina include:

Intrepid Exploration: Brienno to Laglio on the Via Regina

From Laglio to Moltrasio

Walking the Greenway and the Antica Via Regina

Taking Argegno as your base, you may be interested in Argegno to Argegno: Up and Down the Telo Valley

Descending from Corniga you see Isola Comacina, the Lavedo peninsula, Bellagio, the Grigne mountain range and beyond