Strada Regia – From Torno to Pognana

The Strada Regia is the ancient mule path linking Como to Bellagio. Its route has only quite recently been rediscovered from documents in the local provincial archive. Most of the route has now been restored and signposted offering over 30 kms for walkers and cyclists.  It is not to be confused with the Via Regina which is the ancient route connecting Como to Chiavenna running up the west side of  Lake Lario. I was unaware of  the Strada Regia until I was looking for alternative footpaths from Brunate to Torno (see Brunate to Torno Revisited). That first section of the route was so pleasant that I was eager to explore the second section from Torno to Pognana as soon as possible. 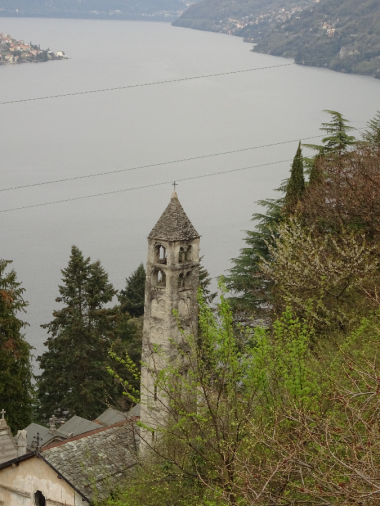 My high expectations were  not disappointed. In fact, this route is truly magnificent with the following advantages 1) an almost constant view of the lake on your left hand side 2) a ‘string of pearls’ – three medieval villages all perched at about 500 metres above lake level 3) abundant streams, waterfalls and woods 4) options for eating and drinking along the route.  Whilst the lakeside environment recalls the long established life of former fishing communities, the Strada Regia (and this section in particular) illustrates the agricultural life of the alpine communities perched well above them.

I took the C30 bus out of Como to get to Torno although an obvious alternative is by boat. (For more information on transport, go to Transport. If you want to make use of the excellent network of bus routes, I can recommend the Arriva ASF app – follow link for the Android version).

The route takes you past many streams, gullies and waterfalls.

Climb up from the port or from the bus stop until you pick up the signs for the Strada Regia as shown above. The route is generally well signposted with only the occasional ambiguity as in this instance shown in our photo where we should continue climbing up the path rather than take an immediate left as suggested. However do turn left (north) as soon as you join the Via per Molina.

Molina is in fact the first of three medieval villages on our route  which along with the Riva di Faggeto, make up the community now called Faggeto Lario. The three villages of Molina, Lemna and Palanzo  are a veritable string of mountain pearls on the way to Pognana.

The Via per Molina leads us back down onto the main road right by an ancient stone bridge crossing the first of many streams with steep canyons and waterfalls. We have to follow the main road for about 500 metres past the entrance to the Villa Pliniana getting back onto the mule path on the right hand side after the first curve in the road. There are only two occasions where traces of the old Strada Regia have disappeared and we are forced onto tarmac. 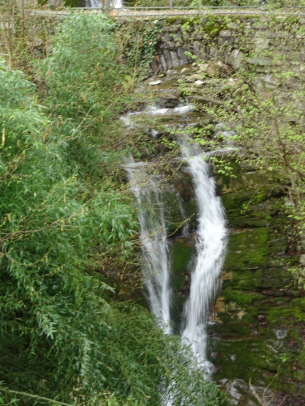 As soon as we resume the mule path and begin a gradual climb up to the level of Molina and the other villages, glorious views of the lake open up facing north. Our path crosses over a minor road and then passes a chapel dedicated to San Rocco , the saint who aided the recovery of plague victims whose chapels or sanctuaries were judiciously located on the outskirts of the medieval towns and villages.

Perhaps what most stands out as typical of Lake Como is the impeccable beauty of the lakeside communities in their waterfront settings with the mountains as a backdrop. Towns such as Bellagio, Moltrasio, Torno, Cernobbio or Rezzonico are rightly renowned for the charm of their cobbled streets, with narrow alleys and arches opening up onto glimpses over the sparkling lake water. However I contend that none of these towns can match the unstudied and spontaneous charm of the medieval centres of mountain villages such as Molina, Lemna and Palanzo. What is more, you will be able to appreciate their beauty undisturbed by many if any other visitors. This string of mountain pearls is as beautiful as anything to be found in Tuscany or Umbria – they are just splendid. 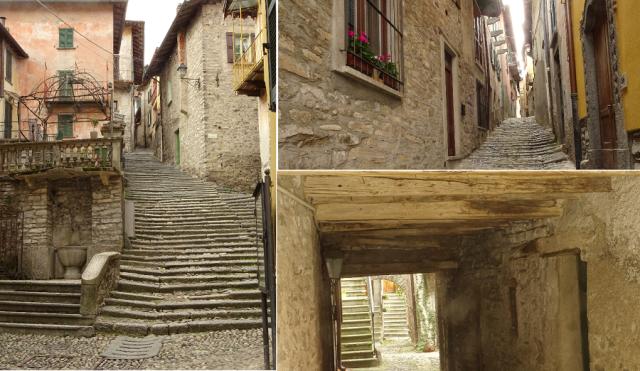 From Molina you see Lemna just across the other side of the valley but the path takes a good half hour as it follows the contours of the mountainside. However Lemna will not disappoint when you do arrive. The Strada Regia seems at this point to have found itself at the perfect altitude for a calm appreciation of the lake and its mountain environment. 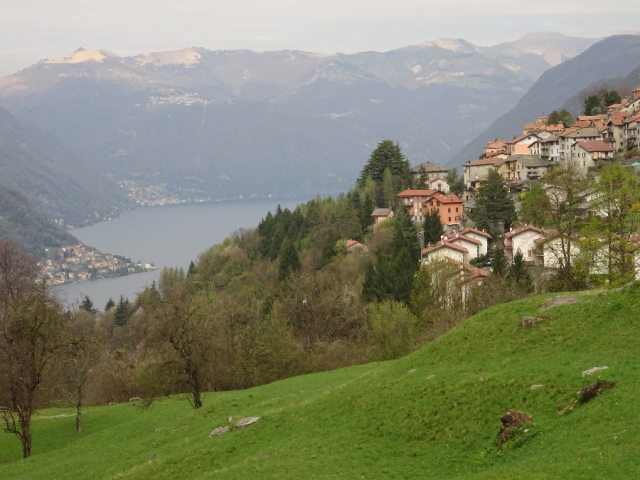 How come? The elevation ensures exceptional views both to the north or south down the lake. We are also well above the tourist attractions of the lakeside itself yet sufficiently connected to make Lemna and the others entirely viable communities which although tranquil, are from dead. 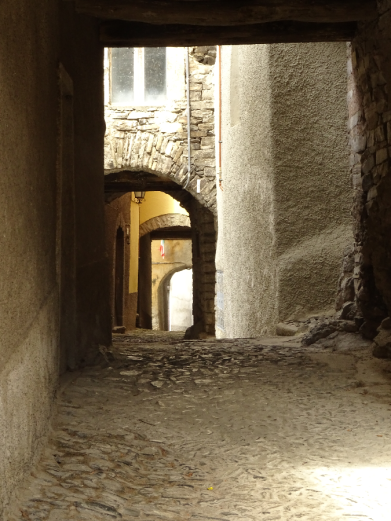 Take the road down from the church at the top of Lemna towards our final pearl – Palanzo. This is the second and only other part of our route where the traces of the old Strada Regia have been lost and we are forced onto tarmac although the road here is quiet. Turn back onto the Strada Regia as we enter Palanzo crossing an old stone bridge across a gorge and entering under a portico into the church square at the top of the town. Cross through the town to the cemetery on its outskirts where there is also a chapel dedicated to the Madonna of Lipomo. Here we again pick up the mule path towards Pognana.

Here we walk through more woods, pass by waterfalls and lake views until we reach the Oratorio of San Rocco on the edge of Pognana. The oratorio is in a marvellous location and the external views are apparently matched inside by a series of 13th century frescoes. Take a look if you are lucky enough to find the building open. 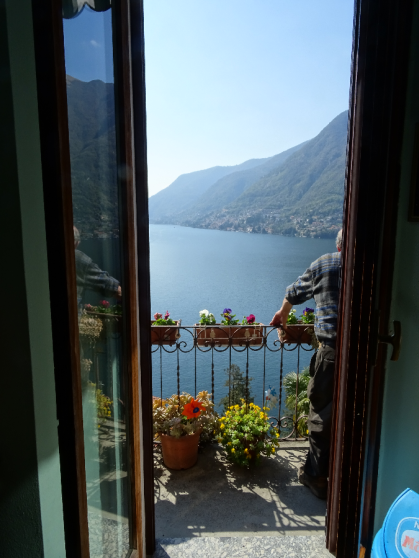 We then make our way down through the last medieval settlement on our route – Pognana itself. There is a bar called Peppo’s on the main road opposite the modern town hall that sells bus tickets and also has a priceless view from its balcony or through its picture window down the lake. The bus stop back to Como is just outside the bar. There is an embarkation dock down on the lakeside if you prefer to return by boat but check timetables before setting out since departures may be a bit limited.

This route takes about five hours of unhurried walking allowing time for breaks and meanders around the ancient streets in the mountain settlements. There is a restaurant in Molina and also in Pognana and you will find bars also in Pognana, Palanzo and Lemna.