Borders and boundaries tend to act as mental as well as physical barriers and so there is something strangely liberating in defying them. However this particular act of defiance is truly banal, carries no risk and is very enjoyable. Take the train from Como’s San Giovanni station to Mendrisio in Switzerland. It costs €4.50 one way and normally requires a change of train at Chiasso – the Swiss part of the Como urban agglomeration. Then pick up the last section of the Swiss Path no. 7 – the Via Gottardo- to return you to Como via Maslianico. Click on the link here for details of this walk.

The journey to Chiasso is short but, at least for a non-frontaliero like me, much more atmospheric than the equivalent by car. The train makes slow progress through a long tunnel before emerging out onto the extensive goods yards of the border town. Nowadays, with Switzerland within the Schengen agreement, you don’t even need to show a passport as you walk the 50 metre customs zone along the station platform to pick up your connecting train. Not so easy instead for those migrants who having crossed the Mediterranean, now seek to make their way, barrier after barrier, into northern Europe. The few who have already been granted access hold onto their precious envelopes holding their rite of passage and anxiously enquire if the waiting train will take them further on their way north or return them south back towards the nightmares from which they are escaping. 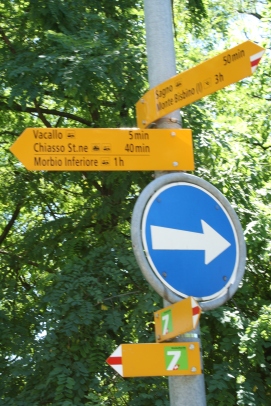 Descending at Mendrisio you can immediately pick up the signposts for our path – the no. 7 Via Gottardo which runs from Basel to Chiasso. After a brief section through the affluent outskirts of the town, the path climbs relatively gently up through well-tended vineyards.

For someone accustomed to Como and its surroundings on the lake, this route , due perhaps to the mental impact of the border, prompts comparisons and judgments on the similarities and differences between these two adjacent territories. And one thought is how come there are so many vineyards here just over the border, or, alternatively, why are there no vineyards in the Province of Como except at Menaggio and Domaso? Whatever the answer, I plan to attend the Mendrisio Wine Festival (Sagra dell’Uva) held from 23rd to 25th September and find out for myself what these wines are like. Click for details.

As you walk through the small hamlets of Corteglia and onto Castel San Pietro, the old buildings are similar to their picturesque counterparts on the other side of Mount Bisbino. The name plates for the old cascinas reveal the same dialect as in Maslianico – the architecture, the dialect, the terrain are all the same except possibly for a slightly more manicured infrastructure on the Swiss side. And this includes ongoing clear directions for us to follow Path 7 towards our destination.

After Castel San Pietro the path descends into the wooded valley of the River Breggia – the same river that runs into Lake Como forming the boundary between the comunes of Como and Cernobbio. Whilst that lower tract is channelised and essentially dull, this tract within the so-called Parco delle Gole della Breggia is spectacular.  White water and waterfalls link one pool to another as the river roars down its deep gully.

The path now starts a long climb up to and beyond Morbio Superiore but the reward for this elevation (on a par with Brunate) is the view towards Monte Rosa before you make a slight descent into Sagno. 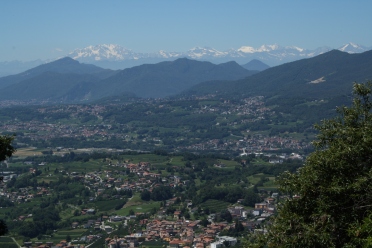 Sagno is a good point to make an ascent of Mount Bisbino with the choice of two paths, one described as picturesque and the other staying in the woods which would be my choice in hot weather. Or of course you can simply continue your descent to Vacalla (and more vineyards) so you can then cross the border into Maslianico and take the No. 6 bus back into the centre of Como.

The walk takes about 4.5 hours and takes you through a variety of environments with some exceptionally beautiful highlights. You can stop to eat and drink either at the Ristorante LatteCaldo outside of Morbio Superiore or else in Sagno. Maybe you will also have defied a mental barrier or two and appreciated how irrelevant the border is other than as a minor irritation to those who live either side of it. 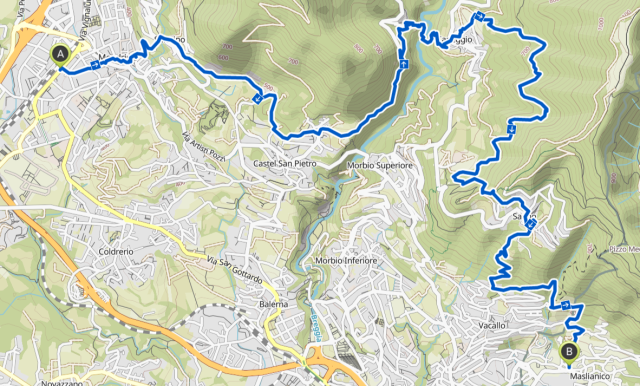