See Como and Early Lombardy Baroque for some background information about the Recchi Brothers who were followers of the Morazzone School based in Via Borgo Vico, Como.  Of the two brothers, Giovanni Paolo is deemed the most renowned painter while Giovanni Battista was renowned as both an architect and artist. Giovanni Paolo spent some time working for the Royal house of Savoy decorating the Royal Palace and other buildings in Turin before returning to Como to complete decoration to his local church of San Giorgio in Via Borgo Vico.

There is a large altarpiece canvas by Giovanni Paolo and Giovanni Battista Recchi on the first floor of the gallery taken from the now desanctified church of San Marco in Via Borgo Vico. It is entitled ‘Il Martirio di San Marco’.

Martirio di san Marco by the Recchi Brothers, taken from the main altar in Chiesa San Giorgio in Via Borgo Vico and now housed in Como’s Pinacoteca on Via Diaz.

This palace was built in the 17th century but later works have destroyed most of the original decoration except for the frescoed ceiling in what is now called the Sala Recchi. The work is attributed to Giovanni Battista Recchi.

The building is private property but access is at times provided for tour groups or open days organised by FAI. 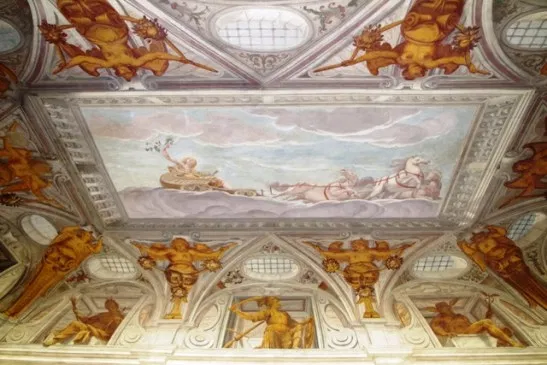 This was originally built in the 1300s but significantly modified in 1514 by Gian Giacomo Rusca. In the offices of the Consiglio Notarile and on the main staircase are frescoes by the Fratelli Recchi.

Palazzo Rusca is a mix of private apartments, offices and shops. Although public access is limited, a helpful resident may well be prepared to provide entry to the main staircase.

Military themed fresco in the main stairway of Palazzo Rusca, Via Rusconi.

This former residence of the Odescalchi family is now being converted into separate private apartments and so the only likely access to the public in the future will be if it forms one of the FAI Open Days. 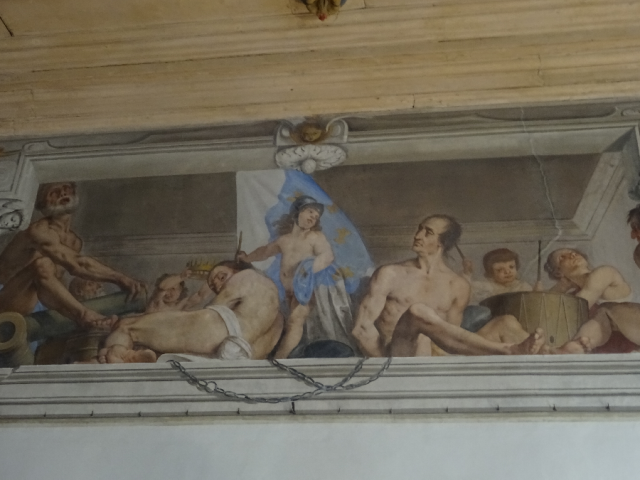 Detail of frescoes by the Fratelli Recchi in Palazzo Odescalchi

This was the Fratelli Recchi’s local parish church. Giovanni Battista was the architect who redesigned both the interior and exterior at the start of the 17th century. The interior houses both canvases and frescoes by the Recchi Brothers including a beautiful fresco of St. George slaying the dragon in the church’s domed roof. This is the most important site in Como for viewing works by the Fratelli Recchi not just for their number and quality but also because the church is almost always open. In addition, the works can be illuminated via a coin-operated box.

Via Borgo Vico, behind the start of the lakeside ‘passeggiata’. Normally the church is open. 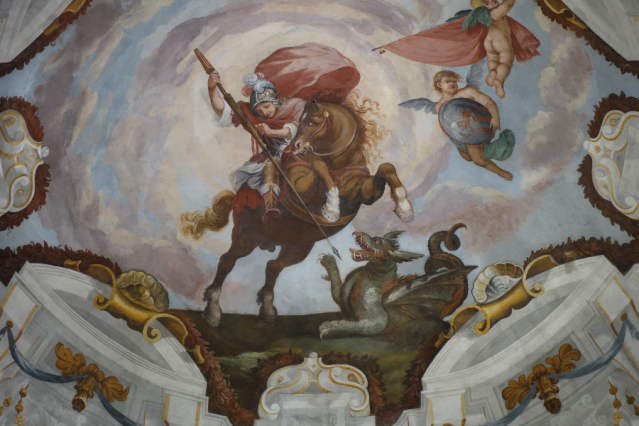 The villa now houses the administrative offices of the Provincia di Como. It is sometimes opened up for public access but always worth giving a call to ascertain if access would be possible.

The villa was built in 1615 for Cardinal Gallio on the site of the ruins of the villa belonging to Paolo Giovio in which he housed his collection of portraits recognised as one of the first museums in Italy.

There are wonderful frescoes on both the ground and first floors but only those on the first floor in the ‘Sala dei Putti’ are definitely attributable to Giovanni Battista Recchi although many of the others are most likely from the studio of the Fratelli Recchi.

Giovanni Paolo Recchi was responsible for the frescoes in the presbytery in the lunette above the main altar. They were completed in two phases, 1679 and 1681.

The church is normally open to the public.

Giovanni Paolo Recchi was responsible for the frescoes in the lunette above the main altar.

The Recchi Brothers executed in 1647 the two large frescoes on the side walls of the presbytery. The one on the left depicts ‘Saint Martin donating his coat to a poor man’ while the one on the right depicts the martyrdom of Saint Agatha. The brothers were also responsible for three of the frescoes within the gold framed medallions on the back wall of the presbytery. Theirs are the three on the arch. 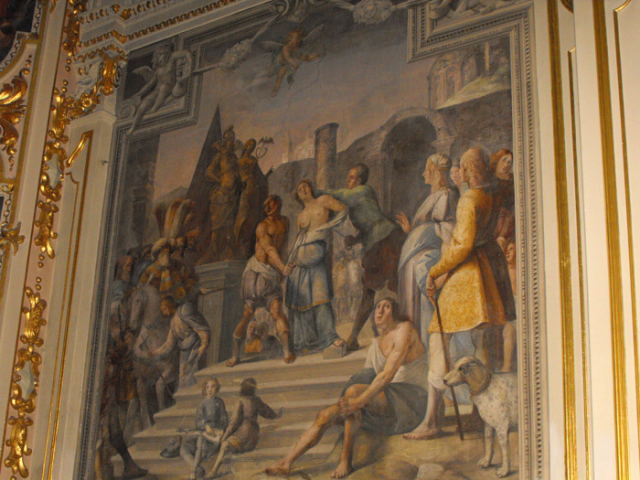 The Fratelli Recchi were responsible for the frescoes in Chapels Eight and Nine on the Sacro Monte di Varese.

Always visible from the exterior 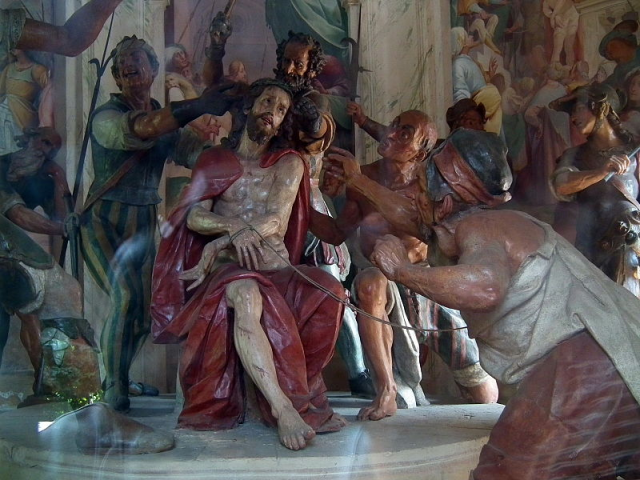 The 8th Chapel on the Sacro Monte di Varese. The Recchi Brothers were responsible for the frescoes in this and in the ninth chapel.

Recent research shows that most of the internal decoration of the Oratorio was executed by Giovanni Paolo Recchi. The Oratorio was rebuilt in the 17th century with work completed around 1670. A Pro-Oratorio Association has overseen a series of renovations starting in 2003 including the restoration of the Recchi frescoes completed by 2010.

Coldrerio is in Switzerland between Chiasso and Mendrisio. A call to the comune on +41 091 646 15 84 might get you contact details for the Pro-Oratorio Association. Nativity by Giovanni Paolo Recchi, the altarpiece in the Oratorio Beccaria in Coldrerio

Frescoes and canvases within the Palazzo Reale and the Castello del Valentino, the Veneria Reale and Chieri.