Strada Regia: From Nesso to Lezzeno 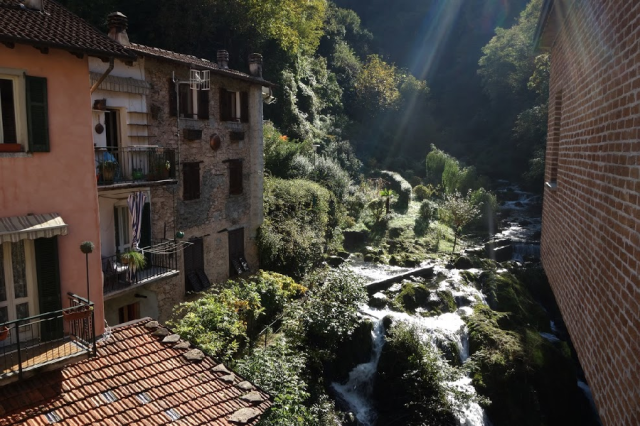 Part of the Orrido di Nesso, where the bus C30 drops you at the start of this walk.

This walk represents the final stage in the Strada Regia’s route from Como to Bellagio, or, to be more precise, from Brunate to Lezzeno since the path officially ends at Lezzeno’s Ponte del Diavolo, three kilometres short of Bellagio itself. I took the walk as far as the centre of Lezzeno, a seven kilometre stretch from Nesso but four and a half kilometres short of the Ponte. You should allow a good two hours but longer, if like me, you are distracted by foraging for chestnuts, walking along Lezzeno’s glorious lakefront or possibly stopping half way to eat at the Baita La Morena. 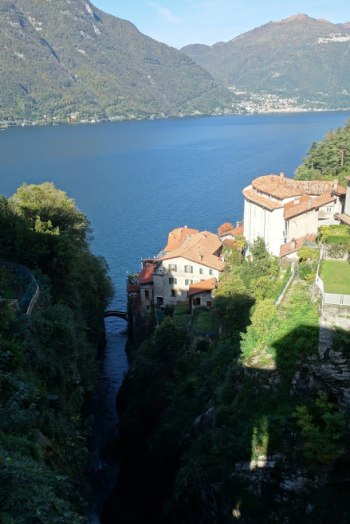 Looking down from the bridge on the main road onto the roman Ponte Civera on the Nesso waterfront.

The walk can be divided into four sections defined by their differing terrains. Firstly we take the old mule paths and cobbled streets through the centre of Nesso before crossing the main road and climbing up onto the terraces. This next section, after a brief climb, flattens out to follow the line of the old terraces with spectacular views over to the other side of the lake. This then gives way to a prolonged stretch of dense woods walking at this time of the year (October) over a carpet of sweet chestnut burrs, the occasional mushroom and wild cyclamen. The final section descends to follow mule paths and a quiet tarmacked road which runs parallel to the main road through the different medieval quarters of Lezzeno until the path finally drops down to join the main road close by the Museum of Racing Boats. To further complicate options, you can start off the walk in Nesso by immediately taking a steep walk up by the Municipal building following the normal Strada Regia signs passing through the quarter called Vico. However here I describe the so-called lower route which follows the contour of the lakefront and will in any case join up with the other option at the second section. 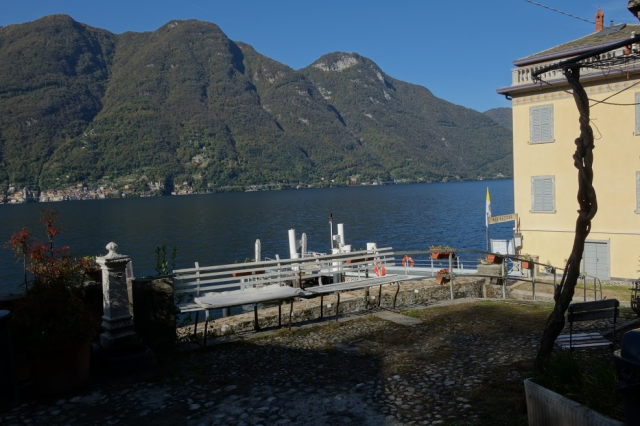 The port and imbarcadero at Nesso. Brienno is seen to the left on the opposite shore.

Our starting point is Nesso with its spectacular set of waterfalls – the Orrido di Nesso. I got here as usual by C30 bus from Como – a forty minute journey. The bus stop is just after the bridge over the gorge which creates the waterfall. From here, walk down to the lakefront by the path on the north side of the bridge and take a closer look at the iconic and much photographed Ponte Civera – possibly Roman in origin.  At the port take the uphill path leading north and follow it until it joins the cobbled street Via Borgonuovo which leads down to the parish church of St. Peter and St. Paul. Keeping on the right hand side of the church, continue as the street joins the main road to Bellagio. Walk along this road in the direction of Bellagio for about 100 metres until you come to a pedestrian crossing. Here you will be comforted to see one of the familiar Strada Regia signs pointing you off the road and up a mule track towards a chapel. You are now leaving the town of Nesso and the main road behind you as you join the second section of the walk. 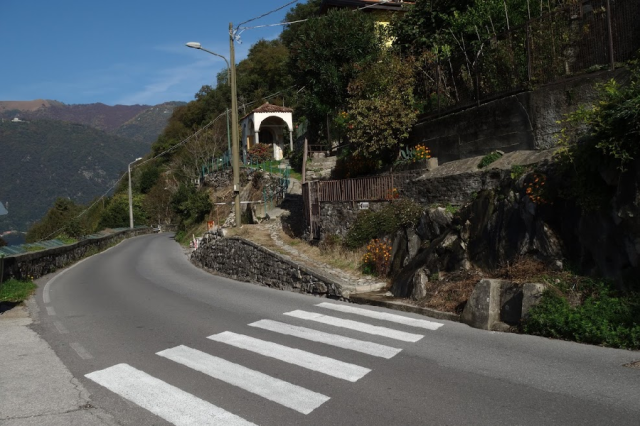 Start of the lower level option of the Strada Regia from Nesso to Lezzeno. 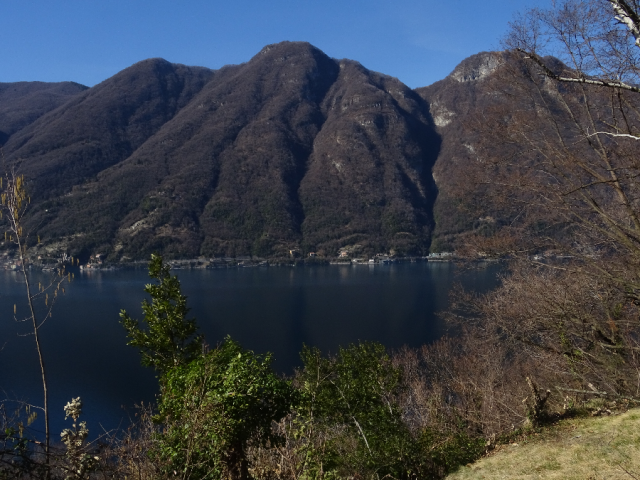 View across the lake to the section of the Antica Strada Regina which is constrained to follow the main road from Brienno to Argegno due to the steepness of the mountains.

This section takes you up above the noise of the main road and then along a line of semi-cultivated terracing. It’s fascinating to note how the countryside has changed radically since the end of the last war due to improvements in communications and the mass abandonment of agriculture in favour of jobs in the towns and cities. From that moment, the extensive terracing which covered the hillsides all around Lake Como started to fall into decline, but the pattern of flat fertile strips divided by dry stone walls of Moltrasio stone is still more or less evident in those areas where the mountains don’t rise too steeply up from the lake. In this section, the terracing is still very evident and maintained in parts for fruit and olive trees. 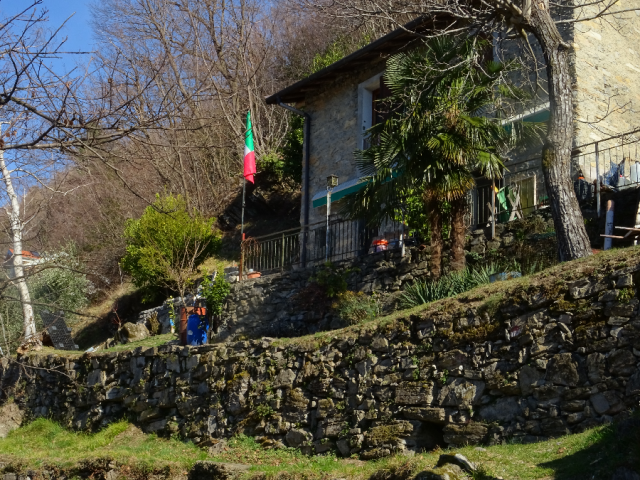 This is the point where you keep to your left to pass in front of the baitas rather than take the more developed path that continues to climb uphill.

Take care when you reach a couple of baitas, one with a flagpole in the garden, to not continue to climb up the hill but to take the less well-defined path which continues in front of the buildings. (The signposting on this section of the Strada Regia is not as thorough or as helpful as in previous parts.) 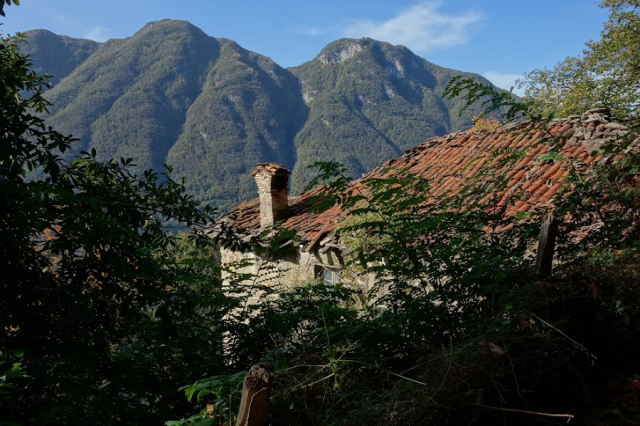 Disused and abandoned buildings like this indicate the dramatic change from agricultural to industrial employment after the last war.

This section of the walk is open and offers marvellous views across to the other shore of the lake with views over to Brienno and on to  Argegno. Looking across the water, you can appreciate how the steepness of the mountains, coming down to the lakefront, has prevented walkers from adopting alternatives to the main road over this particular stretch. There is no such problem on our side however. 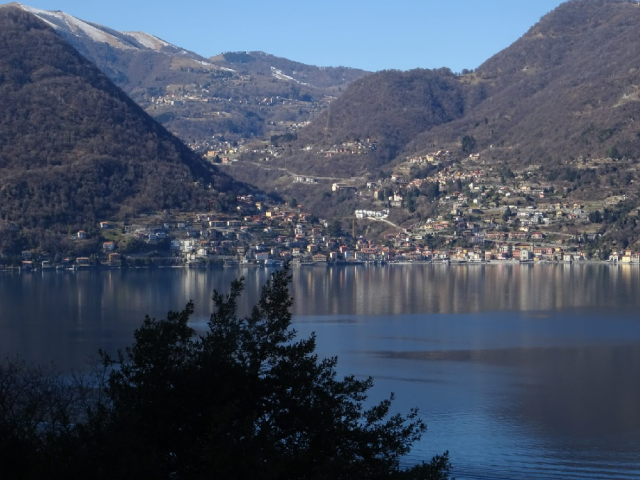 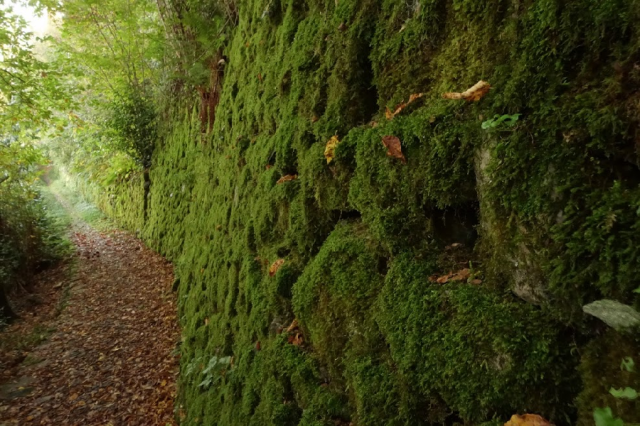 Moss, fallen leaves and replenished streams make Autumn a great season for walking through the woods.

As we progress, the terracing stops, deteriorates or is in any case uncultivated and we enter a long stretch given over to woods. I hear now of ‘rewilding’ schemes in some agricultural areas of the UK but Lake Como went through its ‘rewilding’ unconsciously about seventy years ago as generations abandoned working the land.  Obviously the views over to the other side of the lake are now rare but the woods themselves offer many compensatory pleasures. One of these, depending on the time of the year, could well be collecting chestnuts. There are so many chestnut trees within these woods that it can seem in October as if you are walking on a continuous carpet of the spiny chestnut burrs. Also at this time of year, you may well see various types of mushroom if the ground is damp. If you think you have found and harvested some edible varieties, take them to a chemist just to get them checked before cooking.  Other autumnal joys include wild cyclamen, and the green banks of moss and lichens returning after the heat of summer. 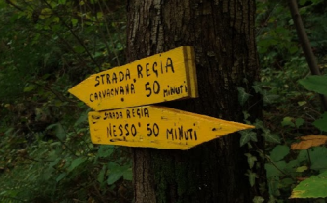