A Walk in the Cosia Valley and Camnago Volta

The walk I am outlining here is Como as few visitors get to see, but it offers insights into Como’s current and past industry and  illustrates its environmental fragility. The walk is a contrast of beauty and banality, agriculture and industry, valley and hillside, past and present, fame and anonymity. With our backs to the lake and oriented eastwards towards Tavernerio, we see features of land use and development typical to many parts of Brianza  beyond the so-called Lario Triangle; namely, industries built up alongside the streams and rivers running off the mountains, small rural communities enlarged to provide worker accommodation, mixed agriculture and, more recently,  suburban residential infill.  This walk gives a microcosmic insight into the fabric of  what is only evident from the air – that is a predominantly urban conglomeration stretching out from Milan with its northern limits firmly set by lake and mountain. This walk gives an insight into a different but vital facet to Como.

Bus stops. No. 4 route from Central Como. The first (west of the map) is the stop at Piazzale della Chiesa di Camnago Volta. The second (east) is the end of the line opposite Villa Volta.

GETTING STARTED: Take No. 4 bus from Como San Giovanni Station or other points in the centre and alight either at Piazzale della Chiesa or stay on until the terminus at Villa Volta. You can then take a circular route to return to your point of departure from either of these bus stops. The circular route takes approximately one hour over dedicated footpaths apart from  one section of road from Camnago Volta to the Villa Volta.  If you also wish to take in the Cosia Valley with its industrial heritage, start your walk from Villa Volta in an anti-clockwise direction and then turn right shortly after Volta’s tomb so to pick up the road back towards the centre of Como. This longer option will add another hour to your walk. Neither option is particularly onerous. The route down the Cosia Valley is on Via Pannilani but there is limited traffic.

There is a a trattoria, bar and local store at Camnago Volta. Ristorante Nosedana is just off Via Pannilani as you descend the Cosia Valley but be warned that this is one of Como’s more expensive (and possibly pretentious) restaurants.

These directions assume you take the No. 4 bus to its terminus and then, having followed the majority of the circular route,  walk back into Como down the Cosia Valley.

As you get off the bus, you are looking at Alessandro Volta’s favourite autumnal residence which forms an adjunct to the old Campora cascina. The route out of Como has taken you due eastwards in the direction of Tavernerio following the northern banks of the Cosia Valley and into Volta country.

Walk eastwards following the northern wall of the villa’s garden along Via Navadera. You will soon pass a delightful little church dedicated to San Francesco. 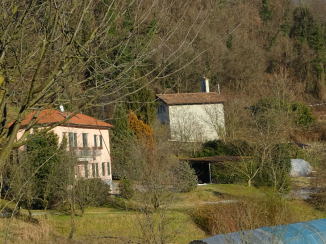 A plaque at the side of the church describes how it was built in the 1500s for the Odescalchi family and was dedicated later in 1703 to St. Francis. Having passed through the hands of various noble families, it was finally gifted to the parish of Camnago Volta in 1934. Inside the simple structure there is an oil painting dating from the 18th century depicting St. Francis receiving the stigmata.

Follow the cobbled path that continues on  to the left of the church rising gently uphill in a north easterly direction towards Solzago.

As you emerge from the path back onto tarmacked road, you will see these contemporary villas built on the northern slope of the valley just below the old tramway. Buildings on this south-facing side of the valley are protected from the elements in the shadow of Mount Bondella and bathed in bright sunlight with glorious views looking over the valley to beyond the Lora escarpment.

As you bear left on the road and continue up hill you will see the entrance to the old tramway on your lefthand side opposite a terrace of houses. This tramway, that originally linked Como to Tavernerio, has now been given over to walkers and cyclists and renamed the Passeggiata Volta. Follow this path to its start at Camnago Volta. 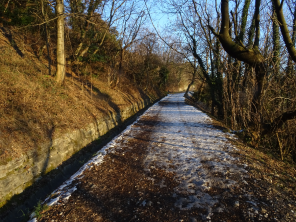 8. Icicles on the Bottino waterfall

You will at some point cross a wooden bridge built over the waterfall and canyon created by the stream called Bottino.  As you walk into Camnago Volta you pass the Church of Saint Cecilia on your left. Turn left down Via Franchi not omitting to appreciate the old buildings around the Piazzale and the delightful fresco on the side of the cascina. 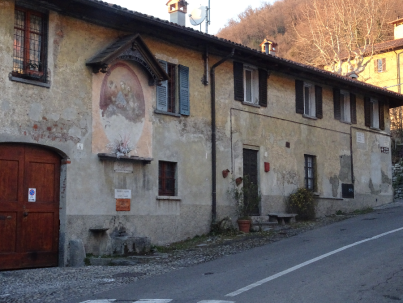 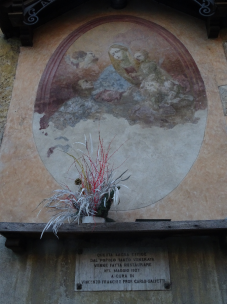 Continue down  Via Franchi as it turns left following the signs for Volta’s tomb which you will soon see in its place of honour within the local cemetery.

As the plaque points out, this tomb is a totally delightful little gem of neo-classical elegance and simplicity designed by Melchiorre Nosetti and constructed in 1831. One cannot help but compare it with the architect Frigerio’s  version of neo-classicism – the Tempio Voltiano in Como. Nosetti’s design puts Frigerio’s to shame in my opinion.

Shortly beyond the cemetery, take the path that leads off downhill to the right. Turn right when it reaches the junction with the tarmacked path of Via Navedano (turning left will lead you back to Villa Volta). Follow this road downhill and westwards back towards Como to take in the lower reaches of the Cosia Valley. As you pass the various factories mostly associated in one way or another with the textile industry (dyeing, printing, finishing), it is easy to imagine how the Cosia not only provided the power source in those early industrial days but also became the waste outlet for those highly potent industrial processes.  It may not look too pretty in its lower reaches but the presence of herons testifies at least to its cleanliness.

12. Industry in the Cosia Valley

Via Pannilani now joins up with Via Briantea leaving you within a short walk from the centre.

The lake is of course splendidly beautiful and the walks along and above it are inspiring but, in my opinion, so is this walk up the Cosia Valley. Even Alessandro Volta turned his back on the lake to take up his favourite autumnal residence in the Cosia Valley so if it was good enough for him, it is more than good enough for me. 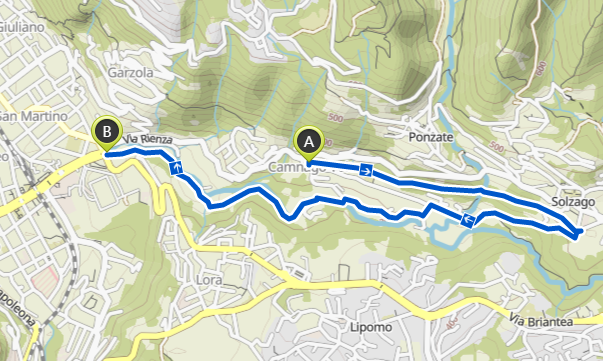 Route starting in Camnago Volta with destination the San Martino district of Como along the Cosia Valley. 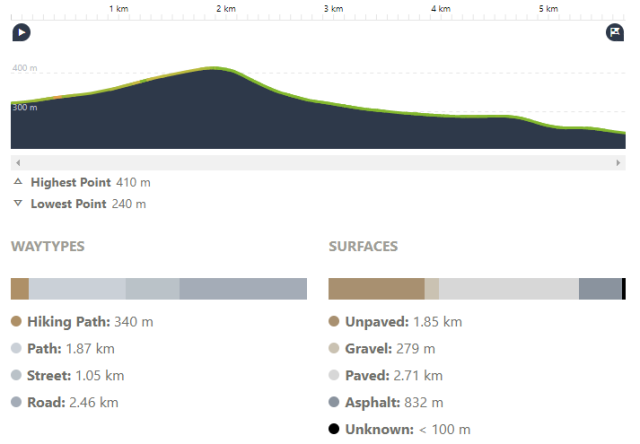