Looking up the Val Perlana

The Val Perlana runs west to east down from Mount Galbiga to join the lake in Lenno. This walk takes us up the southside to the head of the valley and then down the northside to return to the lakefront. The valley is itself very attractive but the walk is even further enhanced by taking in the series of chapels known as the Sacro Monte di Ossuccio, the Sanctuary to the Blessed Virgin of Succour, the ruins of the Benedictine monastery at the head of the valley and the sanctuary of Acquafredda above Lenno.

The start of the walk up the Sacro Monte in Ossuccio

The walk can be broken down into three phases as follows:

You can get to the starting point in Ossuccio from Como either by bus (C10 or C20) or boat to Lenno. Lenno and Ossuccio are very close to each other and starting the walk from either town is possible since both towns clearly signpost the ‘Santuario della Madonna del Soccorso’.

Two of the chapels on the Sacro Monte. They were built between 1635 and 1710 in the baroque style.

The Sacro Monte of Ossuccio is now a UNESCO World Heritage Site due to its significance, alongside a further eight similar structures across Piedmont and  Lombardy, as a cultural emblem of the Counter Reformation. 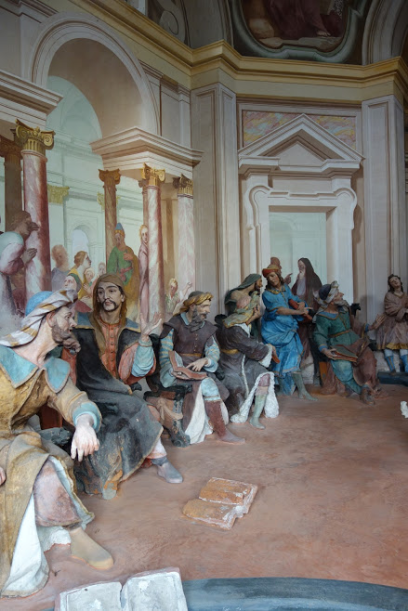 Life-sized stucco and terracotta figures in one of the chapels.

The walk takes you past a series of neo-classical chapels built between 1635 and 1710, each decorated with life-sized plaster or terracotta painted figures and frescoes. These scenes represent key moments in the lives of Jesus and Mary. They were built with the intention of instructing pilgrims on the life of Jesus as they made their slow way up to the sanctuary. The craftsmen who worked on decorating the chapels and the sanctuary were from the nearby Val D’Intelvi whose ‘maestri intelvesi’ had developed skills as sculptors, stucco-workers, architects and artists deployed in providing baroque decoration across Italy, Austria and Germany. The main artist responsible for the figures was Agostino Silva (1620-1706) from Morbio who worked elsewhere in Como, as well as in Urbino, Assisi and in the nearby Sacro Monte of Varese. The frescoes include work by Paolo Recchi. Read our article Stucco and Scagliola – Two of Como’s Baroque Specialities for more information on this extraordinary concentration of artistic talent emanating from the Val D’Intelvi in the baroque period. 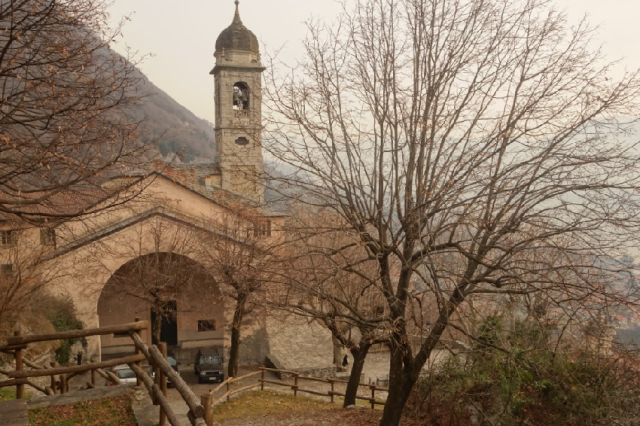 The Sanctuary (Il Santuario della Madonna del Soccorso) is at about 420 metres above sea level. Our walk will take us up to 900 m at its highest point when we reach the Abbey of San Benedetto. The Sanctuary is well worth visiting for the quality of its decoration and more examples of the work of the ‘maestri intelvesi’ including a great example of the false marbling known as scagliola on one of the altars. 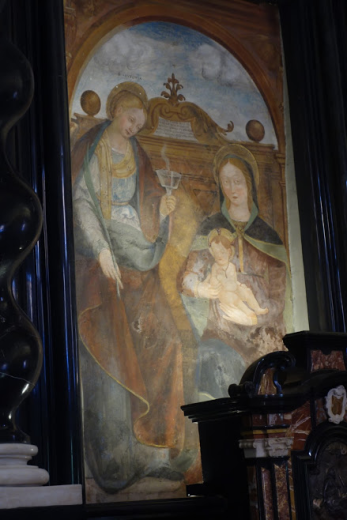 15th Century fresco of the Madonna and Child inside the Sanctuary.

The church dates back to 1537 and the story goes that it was built on the site where a deaf-mute shepherdess found a statue of the Virgin Mary and Child lying in the woods. This discovery led to her being cured of her disabilities. The sanctuary was then built to honour the Virgin Mary and the original statue (dating to the 14th century) was installed and is still to be seen in the side chapel.

After a steep but short section, you come to this turning to the right for the Abbey of San Benedetto

When continuing the climb beyond the sanctuary you will immediately come across a very steep but relatively short stretch which leads you to where the path divides off to the right in the direction of San Benedetto. From this point, the walk is a steady climb up towards the head of the valley.

The path continues through woods traversing a number of streams making their way down to join the Perlana. In fact this side of the valley has much more water than the northside. After about one hour from leaving the sanctuary you will reach a small alpine area with the atmospheric semi-ruins of the San Benedetto Monastery appearing from the woods. The site of the half-ruined abbey is impressive in its isolation and simplicity as a retreat at the far reaches of the valley.

The Benedictines established this monastery back in the 11th century (1090).  The church and the bell tower are built in the Romanesque style.

The Abbey of San Benedetto with bell tower built in the Romanesque style in 1090.

The monastery grew in power with its influence spreading into the Val D’Intelvi and  the Valtellina until it was suppressed in 1431 when the Cistercian monks occupying the nearby Abbey of Aquafredda took ownership of its assets. The Cistercians were in turn suppressed in 1778,  and San Benedetto then passed into private hands and was used as a farm. The main church has now been restored with the help of public funds for which it is obliged to open up once a year on May 1st.

Helliborus, one of the early Spring flowers on show in te mountains.

On leaving the Abbey behind, you walk down to cross the Perlana via a series of stepping stones to reach the northside of the valley. From here you make a slow and gradual descent toward the Abbey of Acquafredda on the western limits of Lenno. The route is on a well-defined mule track through woods and offering some pleasant views over to the Sanctuary of the Blessed Virgin across the valley.

The original Abbey of Acquafredda was founded in 1143 taking its name from a nearby spring. It was however abandoned in the 16th century and briefly used as a den of thieves before being destroyed in 1527. Rebuilding started almost immediately but was not completed until the 17th century with some notable frescoes painted in 1621 by Giovanni Mauro della Rovere, known as Fiammenghino. Stucco work by  Agostino Silva, the same crafstman responsible for many of the figures on Sacro Monte and in the Sanctuary of he Blessed Virgin, was completed in the 1680s.

Having passed by the entrance to the Abbey, the walk continues by following the waters of the Acquafredda spring down into the centre of Lenno.

The ruined courtyard to the Abbey of San Benedetto

This walk is not too onerous. There are some steep stretches between the Sanctuary of the Blessed Virgin and the San Benedetto Abbey but they are not too prolonged. The return leg going down the valley is straight forward. There are no difficulties with signposting since the route is clearly defined by the valley structure. For timings, allow 45 minutes to reach the Sanctuary from the lakeside in Ossuccio. Allow a further one hour from the Sanctuary to San Benedetto and a further hour to return from there to the lakeside at Lenno.