This path is apparently the only one of its kind in the Lake Como/Val D’Intelvi area. The route contains a number of clearly visible yellow plaques describing the plant or tree to which they have been attached. As you can see, each tree is given its formal name, the Italian name and finally how it is known in local dialect. So walkers are not only treated to a botanical but also to a linguistic lesson. The route of the botanical path passes through delightful mountainside cut into by numerous and vigorous streams that have formed deep-sided gullies. In fact, the whole route is rather steep particularly in the early and middle stages as it climbs rapidly above Brienno and the lake. This is also the only path that attempts to climb the mountainside on this stretch of the lake from Laglio to Argegno. 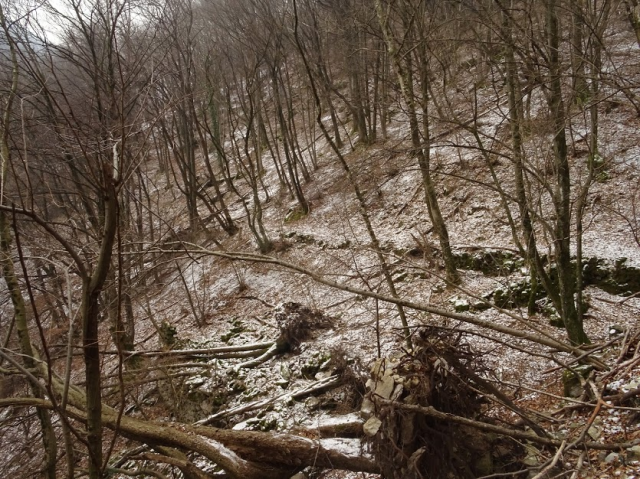 As the path begins to level out and enters into a beech wood, it becomes more difficult to follow due to both landslides and fallen trees.

Walkers’ efforts are also not helped by the number of small landslides and fallen trees which throw up obstacles along the way. In fact, since I was walking here with snow and ice, I had to give up trying to reach the Alpe del Comune. In spite of having to turn back without managing the circular route I had envisaged, I can still recommend this walk for its beauty and botanical interest – and, for those who wish, it is possible to use this route as a means of reaching the Pian D’Erba and on to Posa and Schignano. At Posa, you can then either link up with the Sentiero delle Espressioni or carry on down to Schignano and then on to Argegno for a bus or boat back to Como. That would make for a complete day’s excursion whilst the Brienno section described here is from two to three hours, depending on when and where you feel it is too unsafe to continue!

The Sentiero Botanico is marked in blue. The path to Alpe del Comune is however difficult to use in poor weather. The alternative for reaching the Pian D’Erba and on to Posa is to take the right hand fork above where the map marks ‘Torbola’.

As usually when walking on the western side of the lake, I took the C10 bus out of Como as far as Brienno.  Depending on which bus you take, you will either be stopped right outside the church in the centre or have to walk from just before the start of the tunnel that by-passes Brienno.  Either way, your point of departure is directly opposite the church and the war memorial on the lakefront. 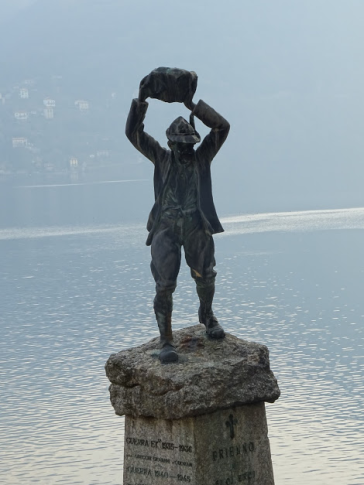 Follow the sign marked ‘Campo Sportivo’. The War Memorial depicting an Alpino soldier from the Morbengo regiment commemorates the occasion when the Alpini were under siege and without ammunition during the Libyan war.  Their only form of defense was to throw stones.

As you walk up through the old town, you will soon pick up on the painted pathway signs for route 1. This is a little confusing since ‘Sentiero 1’ forms part of the ‘Cammini della Regina’ – an ancient  route from Como to Sorico that linked Italy with Switzerland both commercially and culturally.  The ‘Cammini della Regina’ have from Argegno simply followed the modern lakeside road, but at Brienno the path climbs up to about 200 metres above the lake and then follows the contours  of the mountainside to Laglio and on as far as Moltrasio and Cernobbio. These sections of the walk are described in our entries ‘Intrepid Exploration: Brienno to Laglio on the Via Regina‘ and ‘From Laglio to Moltrasio‘. However the numbering seems also to have been used for the Sentiero Botanico and its diversion up the mountainside from the main path. 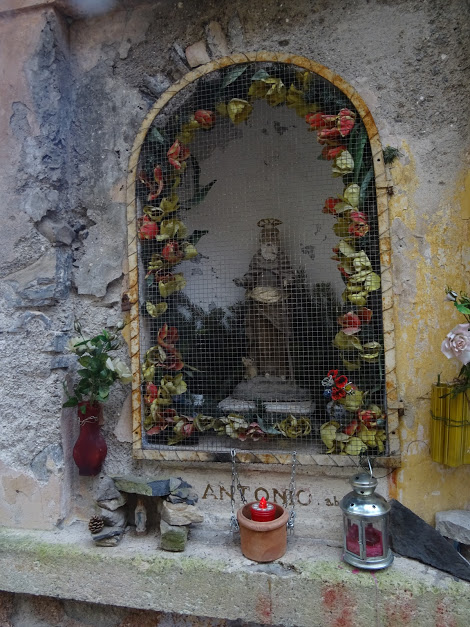 The Chapel dedicated to Sant’Antonio Abate

Additional signs for the Sentiero Botanico are also present. The only point where you may face confusion is at the junction by the Chapel of Sant’Antonio Abate. The effigy to the saint is true to custom in depicting him accompanied by a piglet at his feet. This one is a particularly naive and slightly comical rendering of a piglet. At this chapel, be sure to take the right-hand turn going uphill. By going straight on at this stage, you remain on the Cammini della Regina and will eventually arrive at Torriggia and then Laglio where of course, you might want to drop in on the Clooneys.

As mentioned at the start, this path does include some steep sections that can be tiring but in recompense, you gain some delightful views over the lake and also pass by a number of disused alpine baitas, many now in ruins.

And of course, there are the numerous yellow plaques to inform you of the many varied plant and tree species to be found here. In spite of being brought up in the country, my ability to recognise and name different trees remains basic and I have to admit that to me, one tree trunk looks very much the same as another. However I was intrigued by the plaque on one tree that seemed to suggest that its dialect name could be translated as the ‘tree that spits’.

The tree that spits?

The number of disused and ruined baita on the route testify to an active agricultural economy here in the not too distant past. The steepness of the gradient and the small amount of old terracing makes me think  that our path was developed  primarily to aid the  biannual migration of animals to and from the summer alpine pastures.  For example, it was clearly worth it for the inhabitants to construct the so-called ‘Scala Santa’ at one of the steepest sections of the path. The Scala Santa is a stone set of steps permitting the country people to bring their animals up onto the Alpe del Comune for the summer months. The considerable investment in time and effort in the past to construct this mule path is testimony to the previous importance of the alps to the local agricultural economy.  Now that rural economy exists no longer, and unfortunately, without an economic motive, the path is no longer being maintained as previously.  Further deterioration of the path is unfortunately inevitable given the number of landslides and fallen trees on these steep mountain slopes. 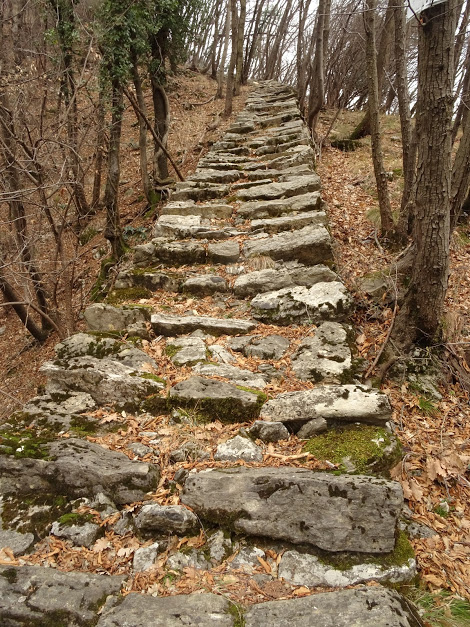 For those of you who do want to reach the Pian D’Erba (1171 metres above sea level), there is an alternative to battling on past the Alpe del Comune. By retracing your footsteps past the Scala Santa you will eventually come across the turning off to the north as shown in the photo below. It is not signposted but the red arrow is the direction to take. This is the only significant turning off the main path.

Apparently the views of Lake Como from the Pian D’Erba are spectacular. Also from here you can follow a broader path down to Posa from where you will see signs directing you to the Sentiero delle Espressioni – a path around Monte Comana populated by a number of wood carvings representing aspects of local folklore and displaying the talents of the Schignano wooden mask makers as deployed in the annual unmissable Schignano Carnival extravaganza. 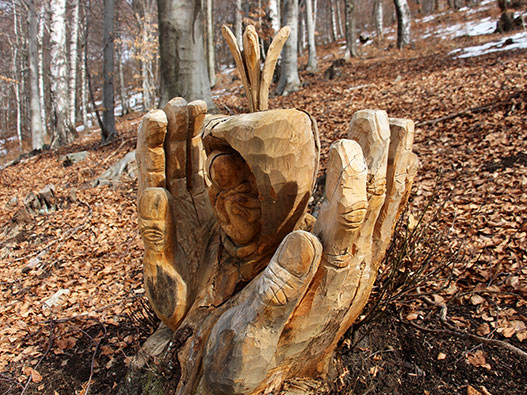 One of the carvings along the Sentiero delle Espressioni 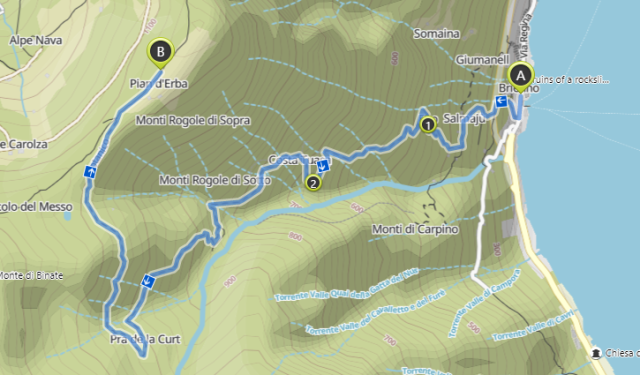 This walk starts from the centre of Brienno and ends at the Pain D’Erba. No circular options have been explored.