Lords and Ladies of Misrule at Schignano

Posted on February 14, 2018 by comocompanion 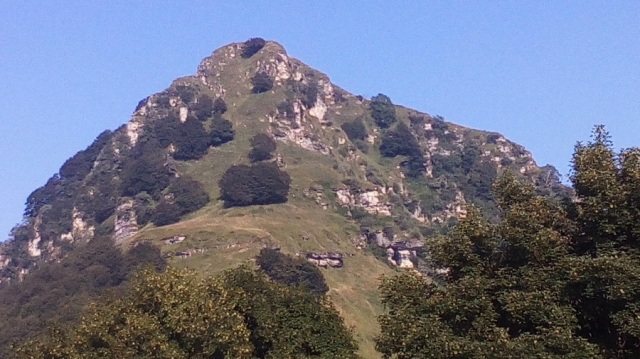 What can raise folklore festivals beyond the quaint and well-intentioned in modern times? What about days of misrule, disorder, transgression, role reversal and a general set of fooling – as can be experienced through the normally tranquil streets of Schignano at carnival time. 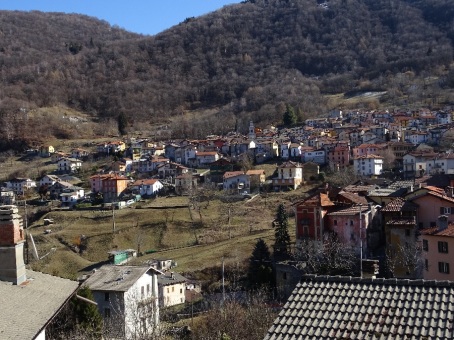 The Mascarun parade alongside the Brut in the Schignano Carnival

Maybe it is this town’s setting below the impressive Sasso Gordona and above Argegno and Lake Como that has preserved this town’s tradition of a yearly anarchic rite with its full set of pantomime-like characters in their own set  of costumes and masks.

The Schignano Carnival is unique, and whilst well-known in Lombardy, deserves a much wider reputation since this is true interactive street theatre at its pagan best without any hint of commercialism or sanitation.

Whilst the carnival represents a spirit of true anarchy, it does have structure with the yearly re-enactment of a perennial battle between order and disorder, beauty and ugliness, the rich and the poor. The battle has its own cast of characters whose parts and costumes have been interpreted down through the years.

The naughtiest of these characters, and those who seem to have the most fun, are the ‘brut’ (the ugly). They dress in rags and sackcloth with grotesque wooden masks and armed with whatever might be used to aggravate the crowds. Some carried battered suitcases which were opened in parody of travelling salesmen. One character paraded with ‘his’ own torso placed within a picture frame as a living personification of Dadaism. Another tended to lunge at onlookers’ private parts with a pair of coal tongs.

The ‘brut’ had their weaknesses though. They could not sustain their fooling, which after all required lolling about with heavy cow bells slung around the waist, without falling into the occasional catatonic torpor lying down prone on the street. After all, they do not just represent the poor as ugly, irresponsible and feckless but of course, they are also inherently lazy! 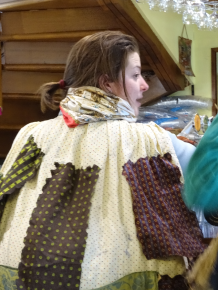 An unmasked ‘brut’ could just as likely be a woman, man or child.

Schignano Carnival – Bruts (pictured) are often armed with something like a carpet beater to aggravate the onlookers or a passing Mascarun (see next photo).

A Brut pulling the shoes off an onlooker

A Mascarun – the rich, sophisticated and beautiful players in the Schignano Carnival.

Now enter the Mascarun also known as the ‘Beii’ (the beautiful) to give a disdainful prod at the catatonic brut. Whilst the brut’s gait is a type of lollop, the Mascaroon walk in a parody of style and grace to show off their finery and sophistication, yet all also behind a grotesque mask and with their waists also ringed by cow bells.

The Brut tease and aggravate the Mascarun as well as pinching and lunging at the onlookers. The Mascarun remain aloof as befits their rich status standing proudly sporting their gargantuan girths.

As the general air of expectation increases prior to the start of the procession, the anarchy increases as the traffic police try to keep the traffic flowing. The Brut are no respecters of traffic police or for the potential danger of a moving car. What does a traffic policeman do as his efforts to clear a traffic jam are thwarted when two ‘torporised’ Brut collapse onto the road directly in front of him? What does the driver do as two other Brut open the passenger doors and blast away on the car’s horn and rub the driver’s face with a rag of wet fur? At this stage, the policeman becomes part of the performance going beyond himself by acting a person thwarted by the force of anarchy from performing his essential function.

A Mascarun poses at the junction managed by a stressed traffic policeman.

A brut forces his way into a car with suitcases 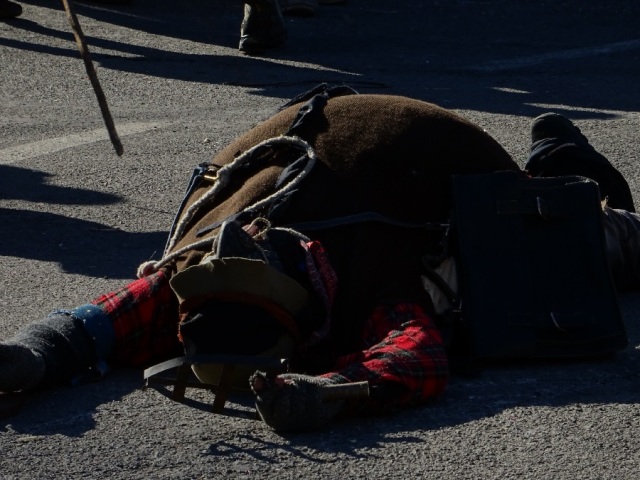 Such disorder cannot go on forever and so, with the start of the procession through the town’s streets, enters the figure of authority – the Sigurtà (see above).

The Sapeur provide an escort for the Sigorta, dressed in sheepskin and wielding a heavy axe.

He is maskless, with a neat moustache and beard wearing a sash denoting his role just like modern day Italian mayors (sindaci). The Sigurtà has his own escort consisting of two massive characters called the ‘sapeur’. They also are without masks but with blackened faces, dressed in sheepskin with splendid sets of sheeps wool whiskers, and armed with heavy axes.

Who has brought about all this misrule? A character (straw man) who remains propped up high on the balcony overlooking the main town square until the end of carnival. This is the Carlisepp who surveys from his vantage point all the chaos below him until he himself will be chased around the town and then burnt on a bonfire at midnight as carnival comes to an end and the forces of disorder are dispelled for another year. 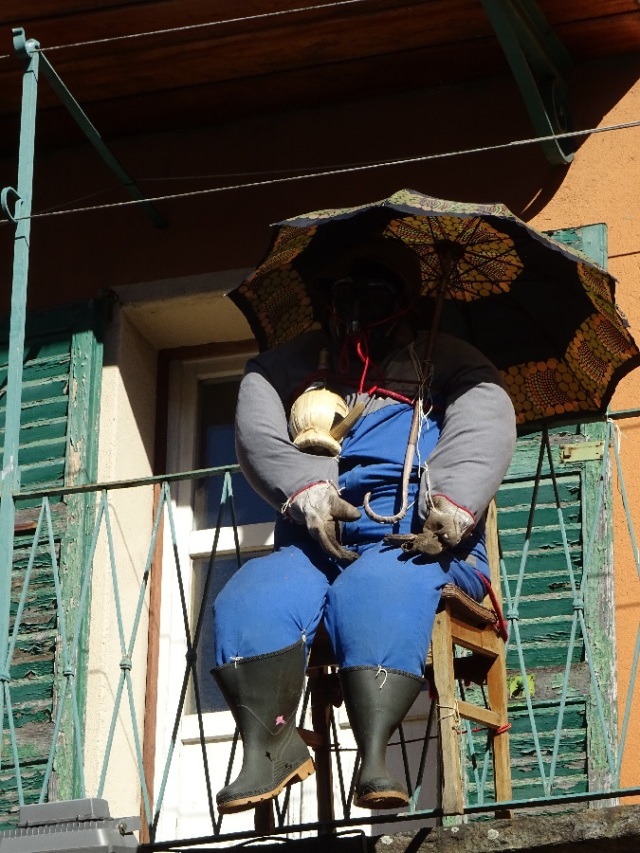 The Carlisepp – the figure responsible for all the misrule who will however be put to flames at the end of Carnival.

Some of this may all be a little scary for the younger children but it’s a whole lot more fun for adults than the anodyne processions of Disney, Spiderman or Toy Story characters who meaninglessly parade through many Italian cities for Carnival.  Schignano is noisy, genuine and fun where we all can relish in the freedom offered by a few hours of true anarchy in, of course, the amazing mountain-side setting overlooking magnificent Lake Como.

Lake Como from Schignano with the Sanctuary of Sant’Anna in the mid ground.

I am an Englishman in Como, Northern Italy - definitely both a Euro and Italophile with an interest in modern history, walks in the hills and mountains, and food and wine. I favour 'slow' tourism alongside of 'slow' food.
View all posts by comocompanion →
This entry was posted in Art, Culture, Events, Folklore, Itineraries, Lake, Uncategorized and tagged Argegno, artisans, Brut, carnival, Folklore, Mascarun, masks, Schignano, wood carving. Bookmark the permalink.