Posted on September 24, 2016 by comocompanion

The 5th edition of this open air exhibition has ‘invaded’ the streets of Como and will occupy them until November 6th. Streetscape’s aim is to ‘creatively redefine the urban landscape’ having invited established and emerging artists to create works that are site -specific – and the best, notwithstanding the hyperbole, are those that do seem to bear some relation to their background.

For example, the lofty nose of a wooden Pinocchio pointing out to the valleys and mountains from Piazza Cavour links the city to its natural setting and even carries references (points) to the wooden carvings of the Schignano Carnival in the Val D’Intelvi. 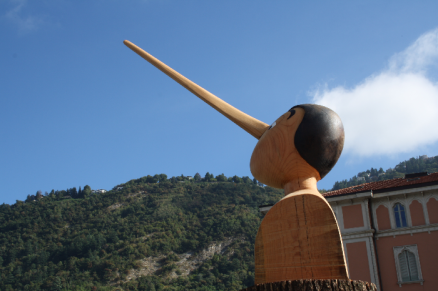 Or the barriers reducing access to the Portico of the Palazzo Broletto whose polychromatic shapes contrast with the monochromatic wartime beach defenses they mimic. 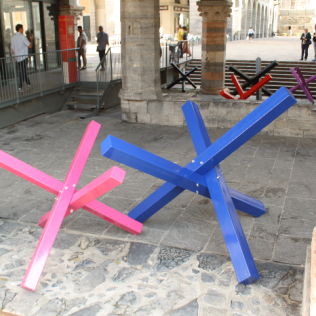 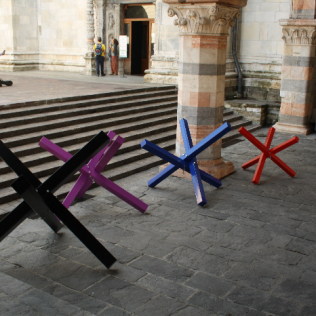 Streetscape offers a lot of fun in seeking out the different works across the city. Each work is accompanied by an explanation of the project and a brief biography of the artist – along with a handy map and pamphlet to guide your ongoing search. 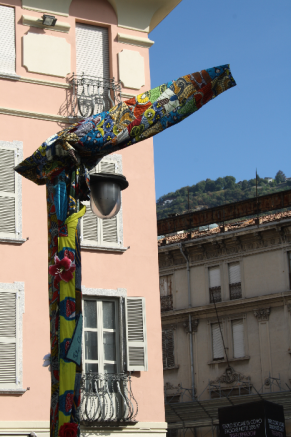 When I went out to track down the works, I was unable to locate all of them however I was soon aware that I was only one of many residents and visitors traipsing around town following this form of artistic treasure hunt.

Each item does seem to create a mental reaction that is not always necessarily positive. Unfortunately for me the work of Manuel Grosso in Piazza Martinelli seemed without impact maybe due to its uninspiring location (but who knows, that may well be the point it intends to make) whilst Diego Dutto’s fleshy plastic plant was in glorious contrast to the formality of its courtyard setting in the Museo Archeologico Paolo Giovio.

Emanuele Scilleri’s invitation to supplement his graffiti-inspired work in Piazzetta Pinchetti had scored an immediate result with the amateur addition of a cartoon ‘cazzo’. Even this understated piece has ironic touches as in the inclusion of the ‘Area Video sorvegliata’ sticker bottom left.

The decision to place Federico Unia’s futuristic urban landscape in the courtyard of the Pinacoteca Civile reminds visitors of the works of Como’s famous son Antonio Sant’Elia whose futuristic architectural drawings are on display at the gallery.

For me however my favourite installation is the series of panels hanging below the windows along the outside facade of the Teatro Sociale done by Giuseppe Veneziano. These witty works make reference to various forms of pictoral iconography  and amongst those, my favourite is the playful and very much updated version of Vermeer’s ‘Girl with a Pearl Earring’. However I have not included an image of it below just so you get out to see it (and the numerous other panels) for yourselves. A few of the panels are however shown below.

All told, this is an engaging exhibition that makes great use of its particular urban setting – and the fact that I could not track down all the works offers me a great motive for trying again! 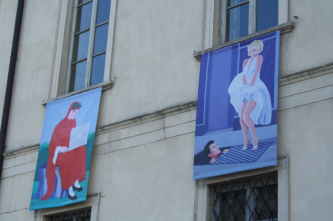 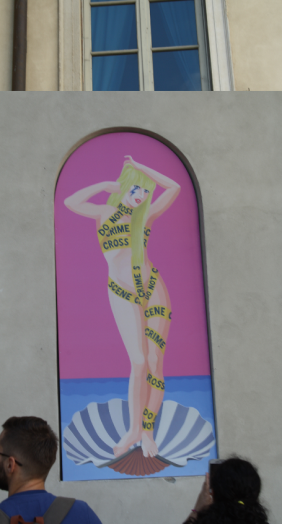 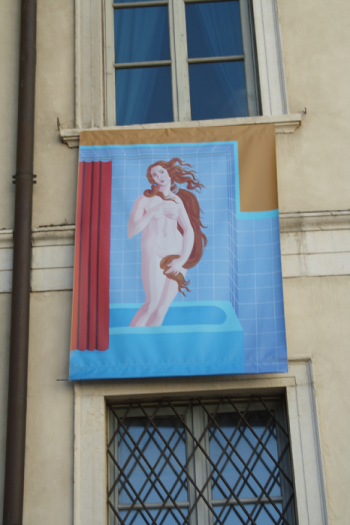 I am an Englishman in Como, Northern Italy - definitely both a Euro and Italophile with an interest in modern history, walks in the hills and mountains, and food and wine. I favour 'slow' tourism alongside of 'slow' food.
View all posts by comocompanion →
This entry was posted in Art, Culture, Events, Itineraries, Uncategorized and tagged Antonio Sant'Elia, Art, Broletto, Como, futurism, Lake Como, Pinnocchio, Street art, Streetscape, Teatro Sociale, Urban art, Walks. Bookmark the permalink.