This month sees the 100th anniversary of the death on the Isonzo front during the First World War of Antonio Sant’Elia. And so what, you might say!

Many small cities can claim one or other famous son or daughter and some of Como’s come immediately to mind such as the Plinys or even Alessandro Volta, the electricity man. Or, on closer acquaintance, we can add Giuseppe Terragni , the rationalist architect.  But do many of us know of the arguably greater influence and global importance  of Antonio Sant’Elia (pronounced Sant El ee a) as one of the founding theorists of modernist architecture?

Ok, so there is a primary school named after him, and a supposed and sententious quote from him adorns the Terragni designed  war memorial on the lakefront – and of course, there are some weird futuristic architectural sketches of his in the local art gallery. But is that enough to warrant a series of anniversary events including a major retrospective exhibition in his honour in Milan? All this for an architect who died prematurely at the age of 28 leaving just one building constructed to his designs and a portfolio of sketches? 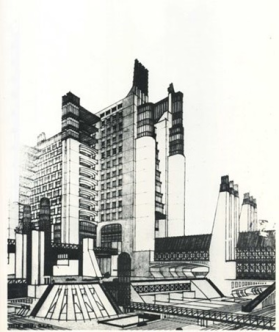 However, take a closer look into the academic world of architects and you will discover that Sant’Elia has an international reputation with claims that he had a more important influence on modernism even than Le Corbusier. He is cited as a major influence on architects such as Richard Rogers as evidenced in the design of the Pompidou Centre or, almost one hundred year after his death on Rogers’ old partner Renzo Piano and his design for the Shard at London Bridge. In other words, he was a visionary, way ahead of his time and for the record THE vital link in the development of 20th century architecture from the flawed notions of futurism into the internationally adopted tenets of modernism. 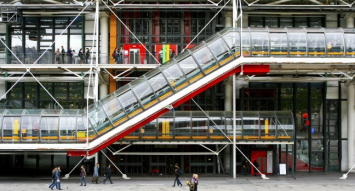 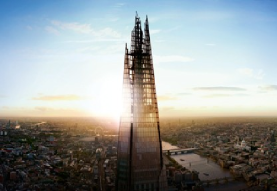 Yes, I repeat the emphasis as THE vital link – here this son of Como constructed a series of future cityscapes through his lakeside lens at a time imbued with an optimism of the future fueled through the local legacy of Alessandro Volta. 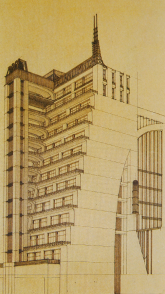 His vision is primarily represented in his series of architectural sketches entitled ‘The New City’ and as the unverified author of the ‘Manifesto of Futurist Architecture.’

His architectural sketches are on permanent display at the Como Art Gallery (Pinacoteca di Como). When you view them, consider how they have influenced other futuristic visions such as Ridley Scott’s ‘Blade Runner’ (1982) or Fritz Lang’s ‘Metropolis’(1927). Maybe you will agree with the Irish Times’ judgement that ‘one hundred years after his death our buildings have yet to catch up with him. 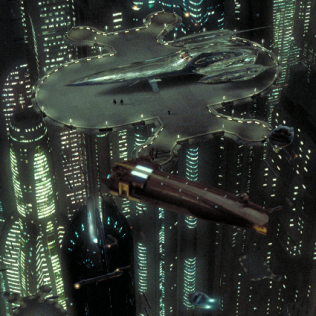 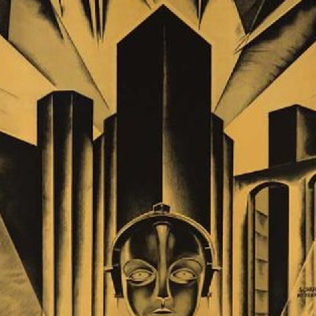 Back at the turn of the twentieth century the dominant aesthetic in architecture was mannerist or eclectic or the equally decorated and embellished style of art nouveau. Sant’Elia eschewed all decoration to replace it with ‘exciting forms created out of mechanistic inspiration’.  Note Sant’Elia’s design for a power station as illustrated and consider these words from the leader of Futurism, Filippo Marinetti who died at Bellagio on Lake Como in 1944: ‘There is nothing in the world so beautiful as a great generating station, humming with power, holding back the hydraulic pressures of a mountain chain, storing the power for a wide landscape, integrated by control panels gleaming with switches and commutators’. 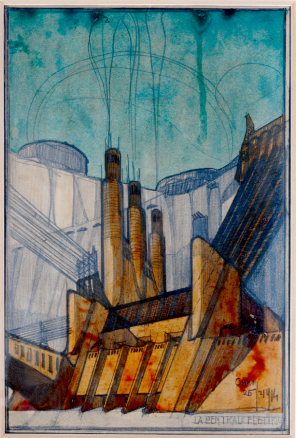 Marinetti was also responsible for rewording the Sant’Elia quote on Terragni’s War Memorial which is in turn based on a Sant’Elia design. The words ‘Tonight we sleep in Trieste or in Paradise with the heroes’ was prose-shopped by Marinetti.

Other than the excellent draughtsmanship of his sketches, what do they possess that has earned him his ever-growing reputation as an architectural theorist? Apparently it is down to his ability to ‘symbolise acceptance of the machine world through powerful simple geometric forms’ but also to maintain lightness, interest and practicality through the use of curves and diagonals. 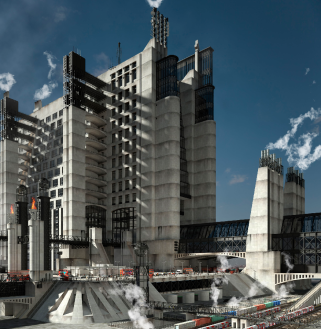 Atkinson and Co. reworking of a Sant’Elia sketch – View their site.

Either way, I urge you to make up your own mind by viewing his sketches at the Pinacoteca in the old town in Via Armando Diaz. Opening times are from 10.00 to 18.00 Tuesday to Sunday.Entrance fee is €4 and €2 for students. The major retrospective exhibition which combines material from the Pinacoteca di Como and other sketches from private collections is entitled ‘The Future of the City’ and will run from November 24th until 8th January 2017 at the Triennale di Milano. The Triennale is open from 10.30 to 20.30 from Tuesday to Sunday. Entrance will be free. The Palazzo della Triennale is in Viale Alemagna, 6. 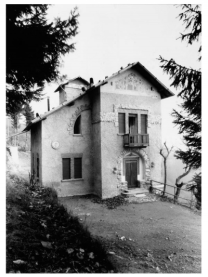 The only building actually designed by Sant’Elia is the Villa Elisi above Brunate on the path past San Maurizio in the direction of the Baita Boletto. The building is a bit reminiscent of the work of C.R. Mackintosh  from the Glasgow School of Art who had exhibited at Turin in 1902, and whilst it shows flair and pleasing proportions, it is not on a scale sufficient to reveal any of his more futuristic ideas.

You may want to follow up on the Manifesto of Futurist Architecture through clicking on this link or go to the site dedicated to Sant’Elia by following this link. 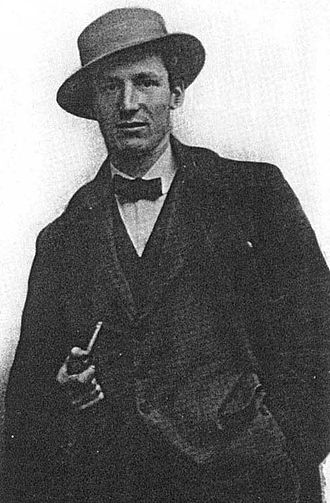 I am an Englishman in Como, Northern Italy - definitely both a Euro and Italophile with an interest in modern history, walks in the hills and mountains, and food and wine. I favour 'slow' tourism alongside of 'slow' food.
View all posts by comocompanion →
This entry was posted in Architecture, Culture, Events, History, People, Places of interest, Uncategorized and tagged Antonio Sant'Elia, Architecture, Art, Boletto, Brunate, Como, futurism, Lake Como, Marinetti, modernism, secessionists, Terragni. Bookmark the permalink.