Posted on August 9, 2022 by comocompanion

Maslianico sits right on the border with Switzerland on the road from Cernobbio. Its smuggler paths consist of a set running more or less horizontally at different altitudes on the lower slopes of Monte Bisbino. These paths played a critical part in the commercial life of the town when smuggling was the key economic activity. The clandestine crossings were also used over the nineteenth and twentieth centuries for political ends either for importing banned texts and pamphlets or in providing political opponents and persecuted groups exit passage to freedom or clandestine entry into Italy. 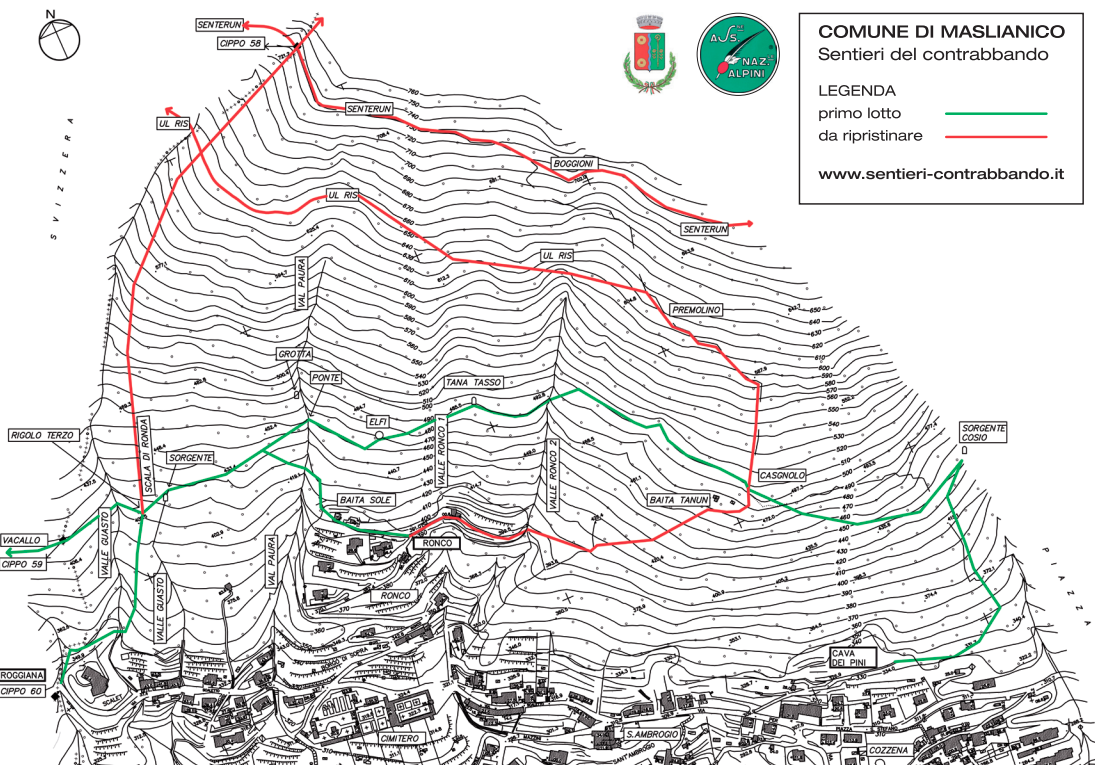 The map of the Sentieri del Contrabbando produced by the local branch of the Associazione Nazionale Alpini.

The map above, which is duplicated on all the main points of entry to the smuggler paths, has been put together by the Maslianico branch of the Associazione Nazionale Alpini. They have also taken on the task of maintaining and signposting the paths. The map shows the three separate paths with the highest known as ‘Senterun’ (Sentiero Uno) followed by ‘Ul Riz’ (the Rice Path) and finally  ‘Ul Terz’ (the Third). Ul Riz is so named because it was the preferred route for smugglers carrying over rice to the Swiss during the last war. All three of these paths cross the border into Switzerland through gaps in the high barbed wire high fencing that still runs alongside the valley of the mountain torrent, Guasto. On the Italian side of the border there is a long series of stone steps that run all the way up from Roggiana (bottom left of the map) to where Senterun crosses over at headstone number 58 – marked as Cippo 58. These steps are known as Scala di Ronda and I assume they were constructed to aid border patrols in the past.

This walk is perhaps not the most scenic to be had on Monte Bisbino – the low elevation limits the panorama to a view over Chiasso and its hinterland. But the mass of its  historical associations accord its own unique atmosphere. Walkers can always choose to extend the hike upwards to join Senterun from where they can eventually reach the Croce dell’Uomo with its spectacular views over the southern end of the lake.

I chose to start the walk from the eastern end at Cava dei Pini as shown on the map below.

My walk started from Point A and continued by following the line of ‘Ul Terz’ before descending the Scala di Ronda to the border crossing point at Roggiana. From there I walked back to the start along the Via Scaletto. The numbers on the map refer to the photos taken en route.

Photo 1. Starting point on Via Scaletta. Note the Alpini’s map attached to this as one of the three possible access points to the Sentieri del Contrabbando.

On leaving the road the path climbs some steps before a right turn leads you to a clearing at the base of a cliff known as the Cava dei Pini with seating and barbecue facilities.

The path continues beyond the clearing and starts its climb up towards the source of the Cosio stream – the ‘Sorgente Cosio’.  At the Cosio the path turns a sharp left to join  Ul Terz. The right hand turn, crossing the stream, takes you towards Piazzola, a delightful mountainside community on Monte Bisbino. 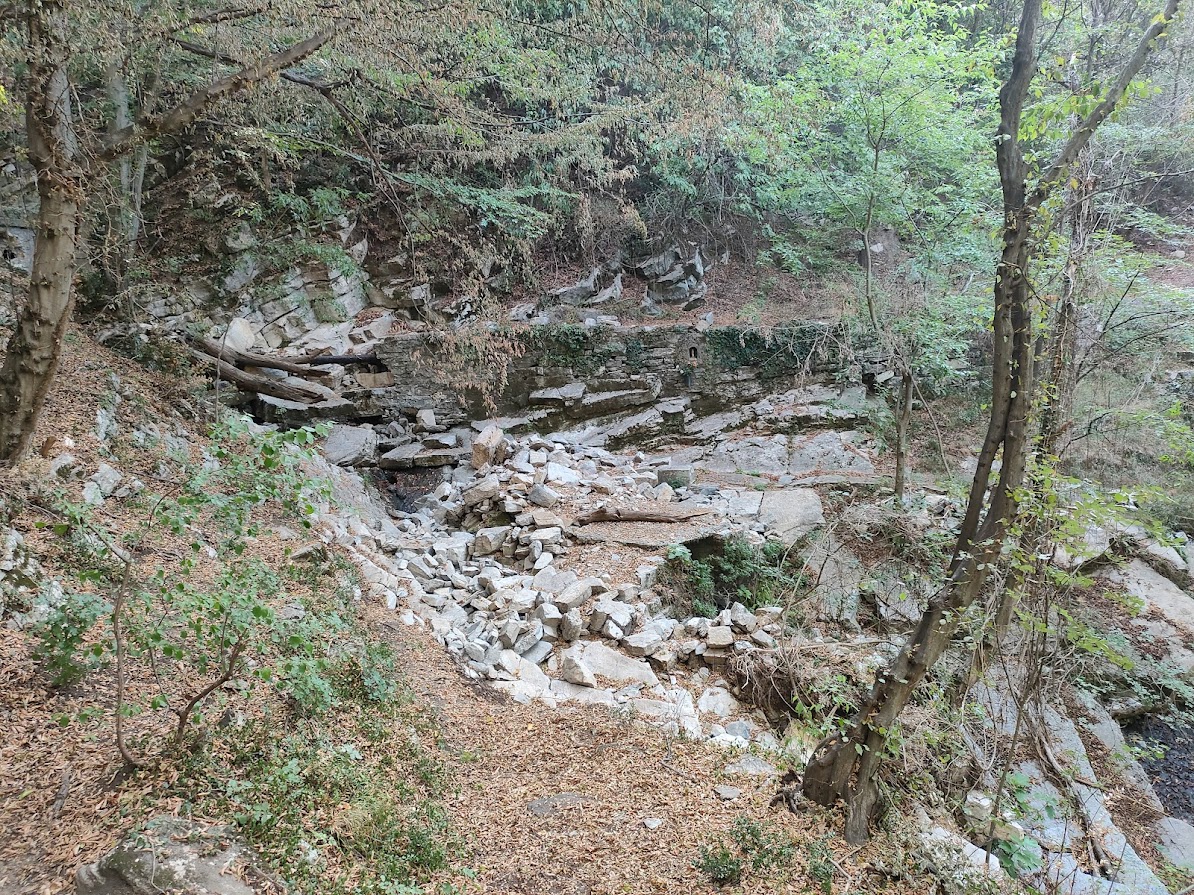 Photo 3: Sorgente Cosio. Turn sharp left to continue on the smuggler path. Crossing the stream will lead you towards the mountain village of Piazzola.

Following on from the Sorgente Cosio up to the junction with the Ul Ris path at Casgnolo includes a steep section shown in Photo 4 below. This gives you some indication as to the continuing effort required if you chose to continue along the Ul Ris. Given a temperature above 30° when I was out walking, I decided to continue on Ul Terz on the route well maintained by the Alpini, with the route marked out by them as shown in Photo 5. 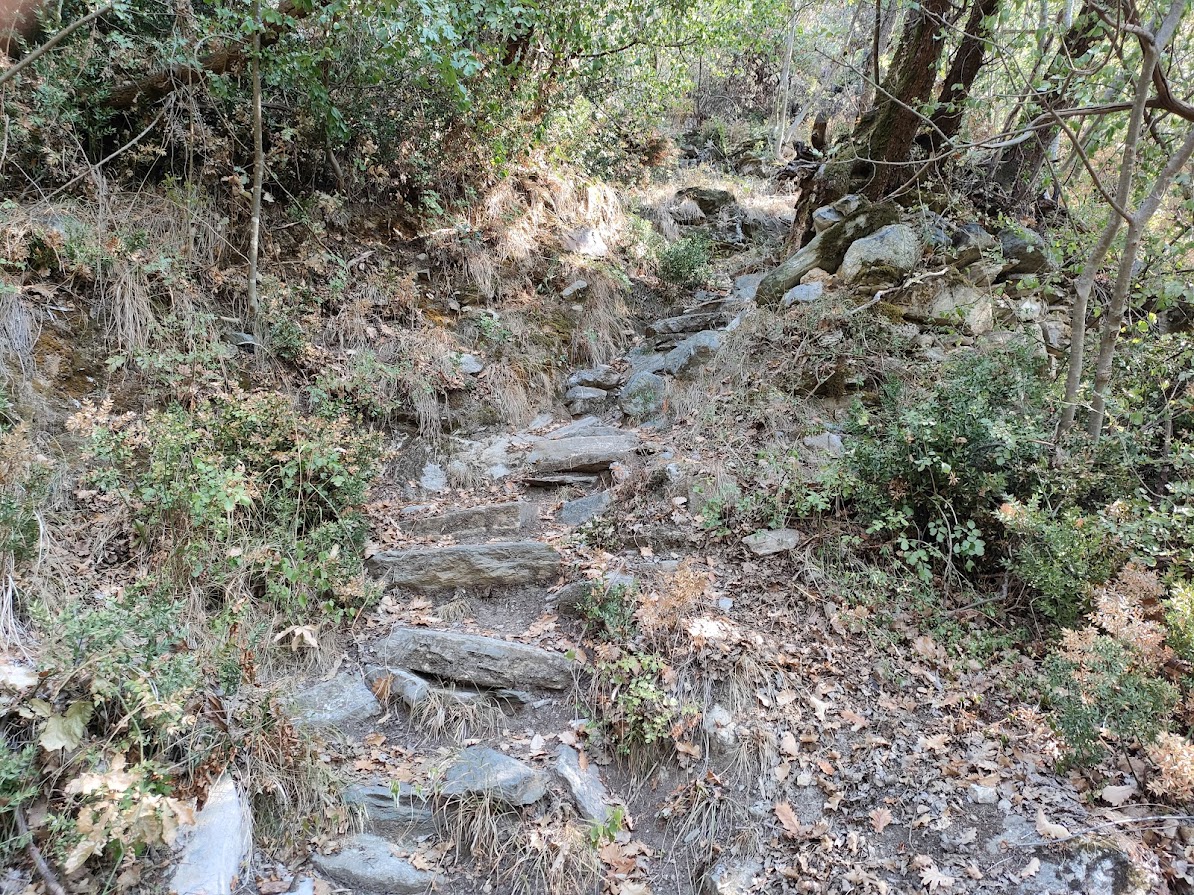 Photo 4: As the contour lines on the Alpini’s map gather closer together, the path gets steeper and more rugged. The junction at Casgnolo gives you the option to continue climbing on Ul Ris or take the less demanding Ul Terz.

Photo 5: The yellow and blue markings guide you on the Ul Terz, the one path of the three best maintained by the Alpini. The markings have faded in some parts but there is little danger in losing one’s way since from Casgnolo onwards, there is only the one path to follow.

When the path gets to just below the Tana Tasso, there is a type of rest area marked by the painted logo of the Alpini with a spring but the water is not suitable for drinking. There are in fact no drinkable water supplies along this route so be sure to bring your own. A short diversion up from this spot will lead you to the Tana Tasso.

Photo 6: The Alpini logo marks the rest area just below the Tana Tasso.

As you continue a gradual descent towards the border you pass a junction as signposted in Photo 7 below where you could shorten your walk by turning left down towards Ronco. 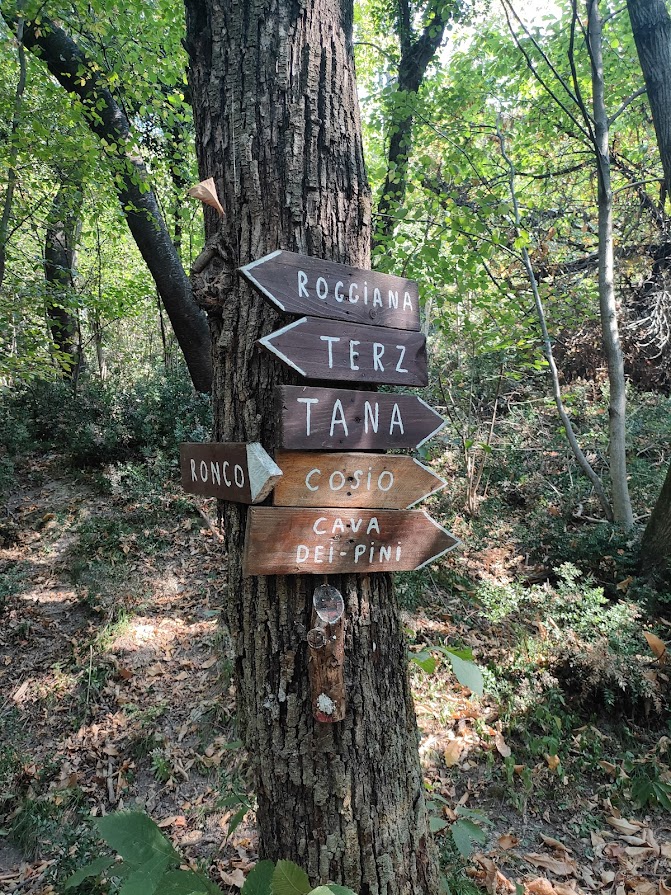 Photo 7: The junction signposted down to Ronco or, as I would recommend, continuing on Ul Terz to the border crossing and down to Roggiana.

The full historical significance of this path and its emotional associations become apparent when you arrive at Ul Terz’s border crossing.  Photo 8 shows the now rusted three metre high barbed wire fence running the length of the border, but with a defined gate and border control cabin (Photo 9) to show that this would have been at one time a legitimate crossing point, unlike that of Ul Riz higher up the hillside. 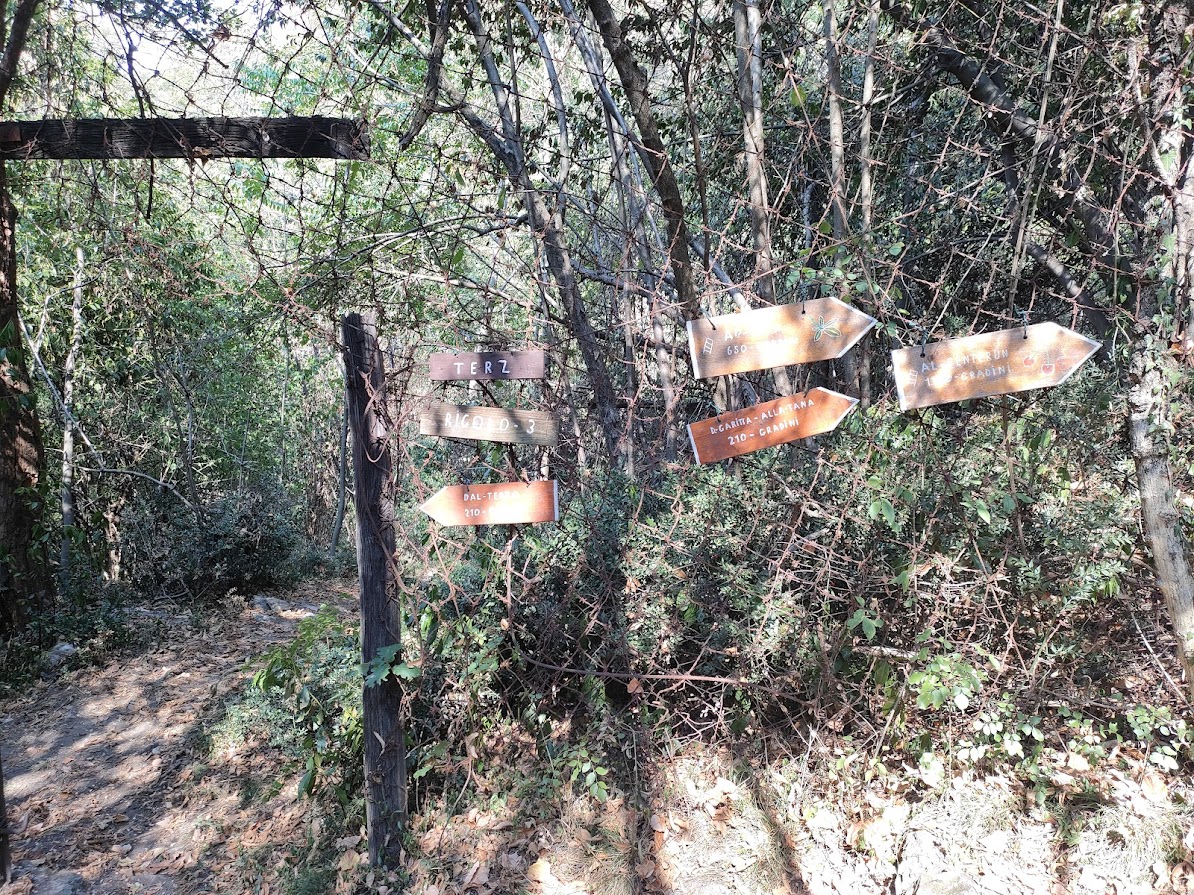 Photo 8: The border fence and gateway of Ul Terz. 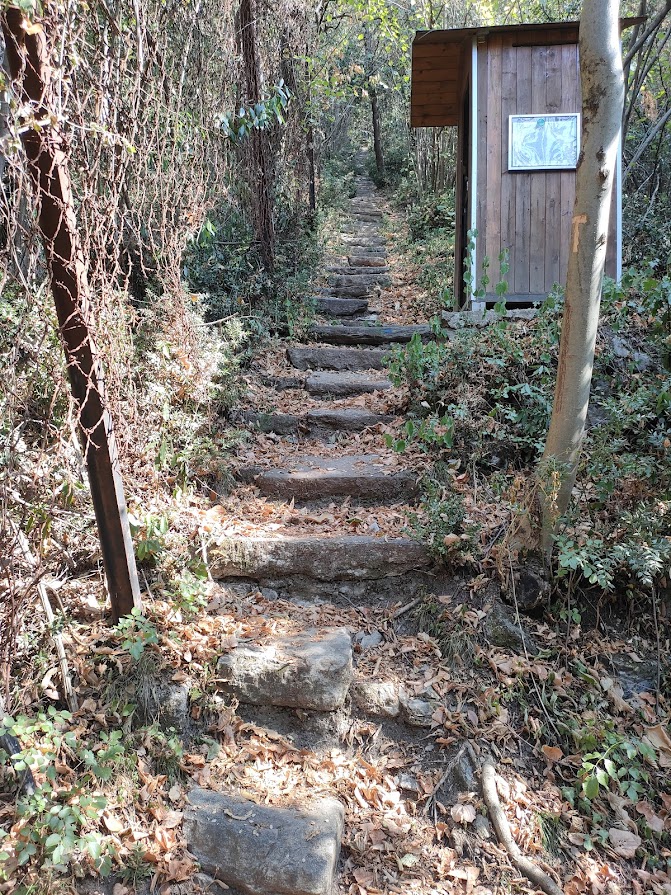 Photo 9:The border hut at the Ul Terz gateway with the stone steps of the Scala di Ronda leading up the hillside.

From this point you would need to climb a further 1,100 of the stone steps of the Scala di Ronda to arrive at the crossing point of the Senterun. Turning left we descend a further 250 steps to reach Roggiana. Descending the Scala di Ronda is more difficult than ascending due to the inconsistent depths of each step. As you descend you will note a number of gaps in the fencing forced by the passage of wildlife who have no understanding and zero respect for national borders. Neither do we have to be much concerned by this border nowadays with Switzerland being within the Schengen agreement but it may be advisable to carry an identity document with you if you choose at this point to continue on into Swiss territory to explore the beautiful upper Breggia valley. 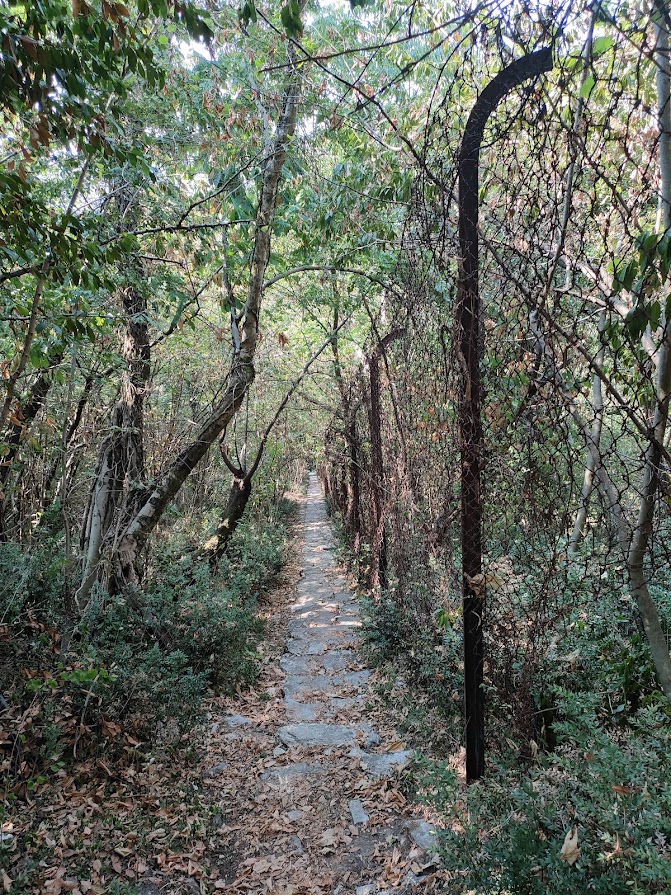 Photo 10: Looking down the Scala di Ronda towards Roggiana.

Roggiana is now an unmanned border post in Maslianico marked by a customs shed and a chapel dedicated to the Madonna di Rongiana (Roggiana). All along this route and particularly at this point one cannot help thinking of all the human dramas enacted here, so many Jews hoping to escape deportation from Italy but with fear of being turned back at the Swiss border, or further back in time, those followers of Alessandro Mazzini bringing in political leaflets and campaigning for the independence of Lombardy-Veneto from Austrian domination.

Photo 11: The Roggiana border post in the background with the Italian customs shed alongside the Chapel to the Madonna di Rongiana.

An easy walk back down the Via Scaletta will return you to the turning towards the Cava dei Pini. I doubt that after this walk you will carry away unforgettable memories of the beauty of the landscape but you will undoubtedly have sensed the historical significance of this border country. Many others have passed this way throughout the 19th and 20th century by fleeing in a bid to save themselves from persecution or re-entering the country in a bid to fight for freedom and independence.

This plaque mounted at Roggiana includes a verse from the local dialect poet Marzo Pino calling on the Madonna di Rongiana to turn a blind eye to the smugglers passing by at night with their backpacks full of contraband – as they return from another night’s mission on the Sentieri del Contrabbando.

Altitudinal profile of the walk starting from Cava dei Pini

For more information on the Jews and other enemies of the state who sought safety in Switzerland from deportation to German extermination and labour camps, read:

Como’s ‘Viaggi della Salvezza’ – In Memory of the Holocaust

Escape to Switzerland via Monte Bisbino

We have written a number of articles on the history of smuggling in and around Como, including:

The Romantic Era of Smuggling: A Game of Cat and Mouse on Lake Como

Como and Contraband – A Romanticised Legacy?

I am an Englishman in Como, Northern Italy - definitely both a Euro and Italophile with an interest in modern history, walks in the hills and mountains, and food and wine. I favour 'slow' tourism alongside of 'slow' food.
View all posts by comocompanion →
This entry was posted in Uncategorized, Walks and tagged Bisbino, contraband, Madonna di Rongiana, Maslianico, Senterun, Smuggling, Ul Riz, Ul Terz, Walks. Bookmark the permalink.