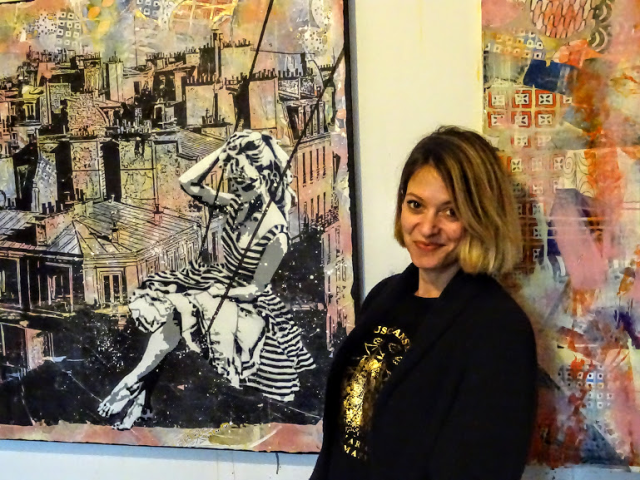 Sarah Aller in her studio on Via Ciceri, Como

Sarah Aller has been living and working as an artist in Italy for the last eight years. I only became belatedly aware of her work recently due to some publicity for her upcoming participation in the ‘Collisioni’ exhibition to be held in Genoa’s Palazzo Reale at the start of May (details below). So there was no time to lose in learning more about this talented member of our local ex-pat community.

We met in her studio on Via Ciceri – a space shared alongside a Herbal Life office where her works displayed on the walls took me directly on a visual voyage via Paris to New York – an immediate affirmation of Sarah’s international background and of her love for urban settings. 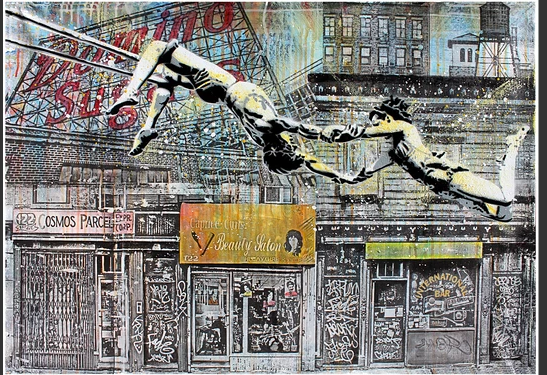 ‘Team Mates’ Sarah Aller. A pair of trapeze artists ascend over a neighborhood street, playfully stretching the width of the canvas. This original, 3 color stencil is sprayed over a collage of digitally manipulated, image transfer photographs. The transfers are adhered over a mixed media background revealing collaged and painted textures underneath. The viewer is nearly at eye level with the pair, engaging with their movements as they hover low over the street, almost touching ground. The piece relates to team work and reliance on those around us.

Sarah was raised and educated in New York where she also attended art school. She might best be considered a New York artist given how she incorporates iconic images of that vibrant city in many of her works. However she doesn’t limit herself to any particular setting and has incorporated images of both Genoa and Como into her backgrounds in honour of one of her favourite Italian cities and of the city where she has chosen to live. Her New York connection has gone down well for her here in Italy. 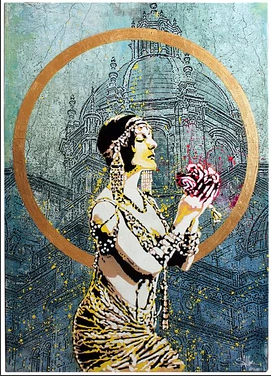 It provokes interest on the part of Italian clients who also frequently ask how she came to be living and working here – “Why did you choose Como?” In Sarah’s case, it was a choice made for family reasons but one she in no way regrets, although she retains fond memories of her time spent in Turin. It was love and adventure which brought her to Italy opening up a decidedly positive chapter in her life in which she feels she has discovered her unique voice as an artist.

That artistic voice is expressed in multi-layered mixed media pieces on canvas. They consist of a background (predominantly urban) overlaid by subjects – a technique which conveys a slight disconnect between the subjects and the context in which they are placed. I compare this with ‘Mr and Mrs. Andrews’, that famous ‘old master’ by Thomas Gainsborough showing an aristocratic couple posed within and showing off their country estate. The point of his painting was the total integration of subject and setting. However Sarah’s technique lightly detaches her subjects from her backgrounds. I got the fanciful idea that this might be a reflection of modern mobility or possibly of the inevitable dislocation inherent in ex-pat life. Leaving my fancies aside, the technique does allow her to objectify her backgrounds so they offer an independent element to how we the viewer wish to read them.

Her subjects are also in a slight time warp with their retro feel revealed in costume, pose or activity. Many of her subjects are children or young people involved in activities such as dance, sport or games. They are caught in active poses with their dynamism contrasting with the static urban background. Sarah once worked as a Montessori teacher and this interest in childhood is certainly evident in her work. 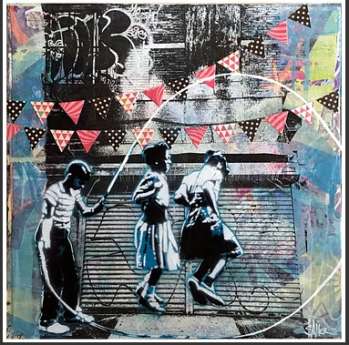 Street Games by Sarah Aller. Image transferred over collage with acrylic on board.

The urban backgrounds often complement this retro feel with Sarah admitting that she loves images of New York in the shabby 1970s or Paris in the bohemian years of the 1950s (when it so happens, the city had a sizeable population of ex-pat American writers, artists and musicians). This same spirit beyond shabby chic leads her to be intrigued by Genoa’s extensive but still mostly run-down Centro Storico or the Quartieri Spagnoli in Naples. She need only add the Ballarò district of Palermo to complete a trilogy of atmospheric Italian urban environments. The urban images used for her backgrounds are transferred from her own photographs. 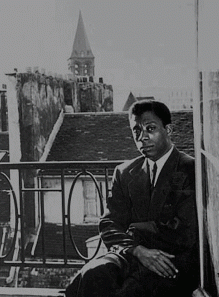 James Baldwin, American author of ‘Giovanni’s Room’ and ‘Another Country’ in Paris in the 1950s.

Her attitude to her own personal setting seems to be flexible and adaptable. She would love her son to go to university here but, despite that and the fact that she loves living here for now, she foresees a time when she would prefer to be closer to her parents. Whatever the future brings, she considers this to have been a formative time here in Italy seeing her mature as an artist by becoming more certain of her artistic style, more confident in the application of technique and finding her distinctive ‘voice’. She does not attribute this to any particular local influence but more a part of the normal ageing process. She interestingly characterised her time in her twenties as the period in which she discovered what she did not want to do. Whilst now, having got rid of the irrelevancies, she can focus on what she does want to do. 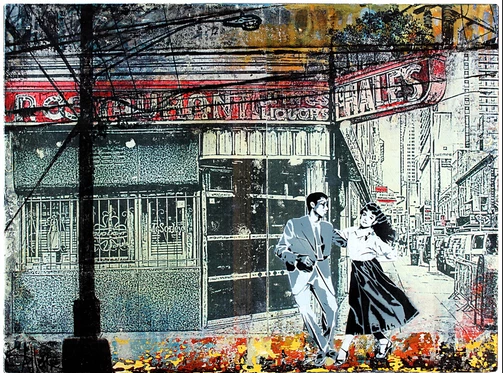 ‘Try to Take Her Out’ by Sarah Aller. Monoprint, image transfer collage, original stencil and acrylic on canvas

I asked about her particular techniques with some trepidation knowing that some artists like to keep a firm lid on trade secrets. Instead Sarah welcomed the topic stating how her clients, apart from wanting to know why she is here, are also very interested in how her work is put together. She is more than happy to tell them. Her on-line catalogue is also more expansive than most on how each piece is constructed. She uses image transfer for creating both the background and the subjects. This is done from bonded carbon photocopies (laser and not ink-jet) using solvents or gel as a medium to dissolve away the paper to leave the carbon image on the canvas. Her backgrounds may also have been previously prepared using collage. For her subjects, apart also from image transfer, she now tends to use a lot of stencils which are either produced by hand from photocopies or cut on a plotter. The stencils are also a practical way to speed up production. In all cases, the starting point is a digital image of the intended final result although the finished work may sometimes differ due to unforeseen effects of the layering process. 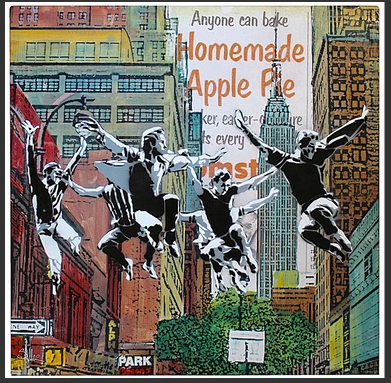 Many of her canvases are complex in terms of actual content but, in my opinion, it is this that makes them go beyond just being ‘interesting’. She goes for contrasts. If the subject is a simple design, the background tends to be full of detail, and vice-versa. The images she selects carry their own connotations beyond their context on the canvas. Both subject and background convey the sort of iconic force often found in street art. Add the visual impact of collage to this and we get works with a dense set of implied but unspecified meanings. The layering achieves a blend of visual complexity and symbolic immediacy. I can only characterise the overall effect as being as if we the viewer are being presented with a story contained within the canvas. We are given hints about the potential protagonists in this story, the time frame in which they operate and the urban environment they inhabit. There’s enough there for us to fill in the gaps and construct the rest. 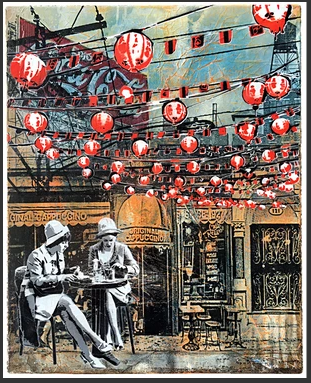 If art can help us sort and make sense of the constant bombardment on our visual senses, then it has value. At their best, Sarah’s stories perform a function not dissimilar to the way our brains perform a subconscious ordering of experience through dreams. My theory goes that the best of her works present the viewer with elements that spark synaptic links with our individual visual memories and provoke an instinctive ordering of them within a narrative of our own making – in other words, they are therapeutic!

Why not put my crackpot thesis to the test and go and see Sarah’s work for yourselves at the exhibition in Genoa. The exhibition is organised by Bellagio-based Tablinum Cultural Management under the title ‘Collision – The Challenge of Contemporary Art’. It runs from May 4th to 19th in the Sala della Corte of Genoa’s Palazzo Reale. She is also represented by Eye Contemporary Art who will exhibiting some of her work at the upcoming Affordable Art Fair in Hampstead, London, being held from 9th to 12th May. Back on Lake Como, you can also see Sarah’s work exhibited in Menaggio from Tuesday July 16th to Sunday July 28th. Sarah is contactable through her website which also outlines the work she does on commission. 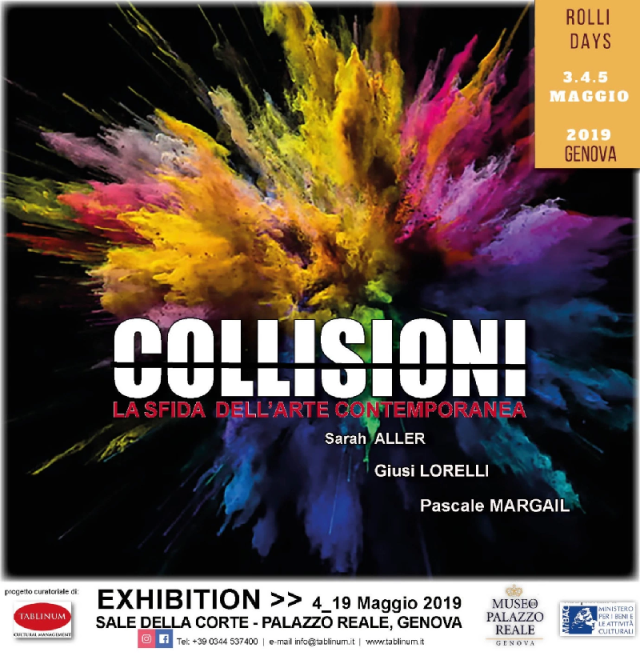 I hope we can persuade Sarah and family to stay on in Como. It’s great to discover another talented artist within our local ex-pat community and I look forward to seeing how her work progresses. The signs are positive – she has taken up her new studio space and is already thinking of how this will give her the scope to get ‘bigger and messier’ as she herself puts it. 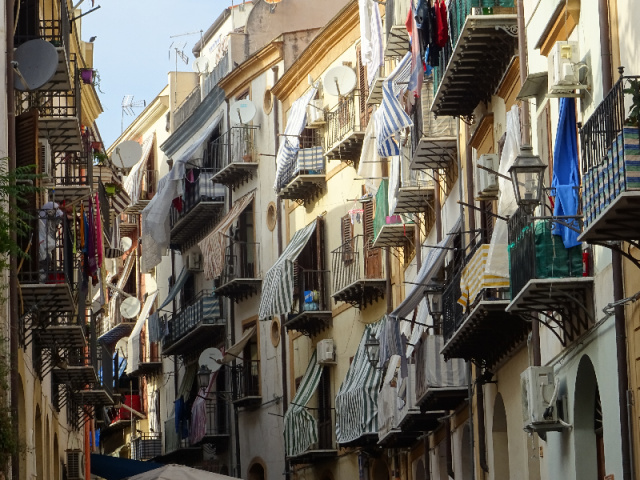 I am an Englishman in Como, Northern Italy - definitely both a Euro and Italophile with an interest in modern history, walks in the hills and mountains, and food and wine. I favour 'slow' tourism alongside of 'slow' food.
View all posts by comocompanion →
This entry was posted in Art, Culture, Events, People, Uncategorized and tagged AAF, Art, Como, contemporary, ex-pat, Eye Contemporary Art, Genoa, image transfer, Sarah Aller, stencil, Tablinum. Bookmark the permalink.