A Castle in Distress: Tiina to the Rescue 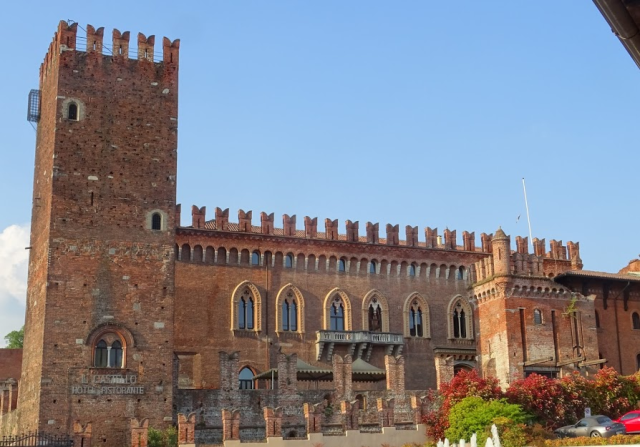 Carimate Castle has fallen upon hard times. It has been unoccupied and unmaintained since 2014. Now, long-time Carimate resident Tiina Hiekkaranta, also known locally as the (Finnish) Countess of Carimate, and her husband Timo want to save it. They have constituted a core team of professionals with a plan for restoring the castle to and beyond its former glory – but they could use some help! 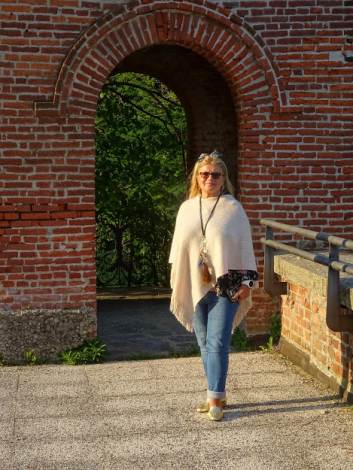 The castle is up for sale, and, given its failure to reach its reserve in former auctions, comes offered at a knock-down price. Yet even if this 7,335 square metre property with a 5.2 hectare park attached, all dating back to the 1300s, was to be sold for a penny, it might still be too risky. That is unless you have the imagination to visualise the immense opportunities, the professionalism to realise them and the commitment to sustain the vision no matter what. Tiina and team believe they have exactly what’s needed – with the help of an angel or two!

Take a look at the Castle in this video link showing just what an architectural gem it is and how it looked back in 2014 before it had suffered damage through lack of maintenance and a leaky roof.

The South West Tower seen from the former moat

Angels will have to go for this plan with head and heart. But the heart won’t need too much convincing because the charms of Carimate and its castle will soon seduce. Would you not want to rest your head for a night or two where the Holy Roman Emperor Maximilian I chose to stay for a week in 1493 and again in 1496? Or to walk in the castle’s forest where this avid hunter chased deer and boar? Or to consider as you climb the south westerly tower that you are occupying the same spot as Giuseppe Garibaldi and the Savoy King Victor Emanuele II when they reviewed their troops amassing for the 3rd of the Italian Wars of Independence?

The castle is sited on a rise above the plain along the Antica Via Regina which was the main medieval route from Milan to Germany via Como and over the Splugen Pass. There was a castle on this site since around 800 –  the former castle was destroyed in 1149 in the conflict between Como and Milan. The current castle dates back to 1345 when the feudal estate was acquired by the Visconti family, the lords of Milan. They built it as a form of holiday retreat, a hunting lodge and a fortification. Its strategic position on the route north was recognised by Caterina Visconti who in the 1380s  added the moat and drawbridge bearing the distinctive heraldry of the Visconti family. The small town of Carimate then developed around the fortified site.

The drawbridge carries the emblem of the Visconti family, lords of Milan throughout the middle ages. The viper devouring a human form is known as the ‘Biscione di Milano’ and can be seen on historic buildings throughout Lombardy, including at the exclusive Villa Pliniana on Lake Como.

Its location in those days was highly strategic, positioned as part of a defensive outer ring for Milan. It is equally strategic today but, thankfully, not for its defensive qualities other than as a retreat on the edge of the Milanese hinterland. It lies within one of Western Europe’s most densely populated and wealthy areas with easy access by air and by road or rail from Switzerland or along from the Veneto and through Bologna. Carimate’s strategic advantage is now strictly commercial. Yet it retains those qualities of peace and tranquillity originally recognised by the Visconti back in the 1300s when they made it their ideal holiday retreat. Nowadays that recreational quality is enhanced by being surrounded by five golf courses, one of which is directly on the doorstep – literally at the bottom of the garden – and being within striking distance of Lake Como, the Formula 1 venue in Monza, the various trade fairs held by Fiera Milano at Rho, San Siro – the home of AC Milan , etc. etc..

Moving on from the 1300s, the Visconti family finally left the castle in 1795 on the death of Ludovico Visconti who died intestate. It was then passed on to a Como family, the Arnaboldi. In 1874 Cristoforo Arnoboldi undertook extensive renovations giving the castle its current profile by adding gothic features and the crenelated roofline. That family eventually sold up in 1954 since when the castle has been through a varied set of fortunes. 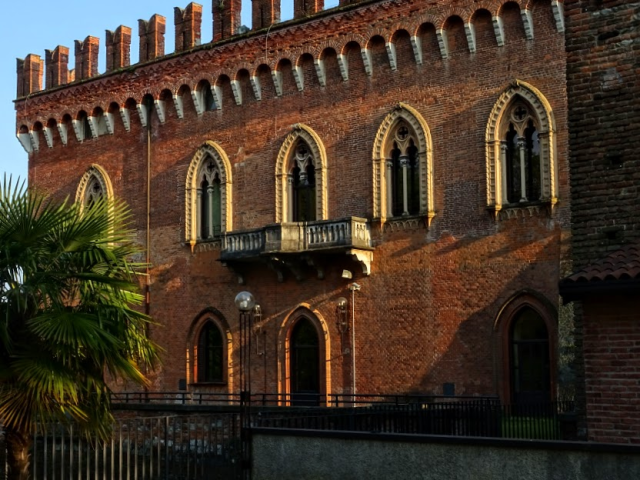 The rear of the Castle showing Cristoforo Arnaboldi’s Gothic renovation including the crenellated roof-line.

The height of these fortunes was decidedly between 1977 and 1987 when the castle was the site of one of the most successful recording studios in modern times – Stone Castle Studios. This enterprise was the brainchild of Antonio Casetta who had a precise and compelling vision. He set about investing in the latest technology and forming a creative environment where artists, session musicians, studio technicians could all get together to share in the production process. For him, the quality of the environment was everything – somewhere where all contributors to the creative process could come together temporarily to work in calm isolation and without negative distractions.

The results were phenomenal. Practically all the great names of Italian popular music recorded here – the Pooh, Lucio Dalla, Fabrizio de André, Antonello Venditi and Pino Daniele amongst many others. The studio’s reputation and the qualities of its setting also attracted international stars such as Paul Young and the UK pop group ‘Yes’ who chose Carimate to record ‘Big Generator’. In the end, it was the financial management that let the studios down.

A Return to Excellence

Tiina and her husband have put together a team of professionals consisting of hoteliers, architects, estate agents, restauranteurs and lawyers all committed head and heart to restoring Carimate Castle back to and beyond former glory. Tiina knows the castle intimately having previously worked for the former proprietors as a sales angel when it was a luxury hotel. She foresees it reopening as a hotel but with a mix of residence apartments in addition to the guest rooms. Latest technology will be deployed for air and water heat control. An excellent kitchen will be managed by the owners of the renowned local restaurant ‘Il Torchio’. Financial costings and estimates are in the hands of Tiina’s husband with his years of experience working in the financial sector. The window of opportunity is now open with the second auction scheduled for May 15th.

The Grand Entrance to the Castello di Carimate.

If you could be one of the angels Tiina and team are looking for, please contact her in the first instance on tiina.hiekkaranta@gmail.com . If you know of any potential angels, please do pass this article on. This gem of a building has been left unloved for far too long and both it, and its little town, deserve better.

The Grand Hotel Milano at Brunate – another luxury hotel being renovated and reopened after years of neglect as top end tourism booms in and around Como and Milan.

I am an Englishman in Como, Northern Italy - definitely both a Euro and Italophile with an interest in modern history, walks in the hills and mountains, and food and wine. I favour 'slow' tourism alongside of 'slow' food.
View all posts by comocompanion →
This entry was posted in Architecture, Culture, History, Music, Places of interest, Uncategorized and tagged auction, Carimate, Castello, Castle, Hotels, Il Torchio, Lucio Dalla, Stone Castle Studios, Tony Casetta, Visconti. Bookmark the permalink.