Ester Negretti One Year On – With Menaggio in Mind

It’s now over one year since my first interview with Ester written shortly after she had moved into her new studio at Via Borgo Vico 82 (Ester Negretti – Como’s Traditional Contemporary Artist). That article has proven to be one of the most popular on the blog and so, on reading about her upcoming exhibition over Easter in Menaggio, I was eager to return to talk once more to her about her recent work.

On entering the studio I was comforted by the warmth emanating from a live flame space heater that certainly was not there on my first visit. And that heater seemed to symbolise how this space had settled down into a comprehensive display of the various facets of Ester’s creative interests. The exhibition area is now a true window onto her work whilst the actual studio, with work in progress, lies behind it. In turn the work area leads onto an equally spacious storage area. The studio stands as testimony to the range and energy of her output with the mix of canvases, objects and furnishings revealing facets that can readily be recognised as characteristic of Ester’s style.

Those stylistic characteristics provide the continuity – an interest in texture, movement, the use of mixed media, broken horizontals, muted shades, an autumnal colour palette that is anything other than Mediterranean  – all these aspects are still evident in her work but also there was something new. I looked around trying to identify what actually had changed. Firstly I noted that on the walls her figure paintings were less evident than on my previous visit. Landscapes had assumed a higher priority.

Ester readily admitted that she had perhaps focused more on landscape lately. This was partially in response to public interest but also, more significantly, due to changes in how she herself had been reacting to her environment. Her more recent landscapes, whilst the subject matter of lake, community and surrounding mountains remains constant, do reflect a broader and freer use of colour.

They still reflect her preference for autumnal and winter tones due, as she explained, to the greater variety in light and mood experienced off season, but maybe now through colour she allows the buildings a greater presence. For me, these subtle changes seem to reflect an increased degree of confidence in her treatment of her subjects, still seeking to express the sublimity and inner essence of place but confident enough to allow some externalities to shine through. Whatever the reason, the results are impressive and the exhibition of these new landscapes at Menaggio will be well worth a visit. 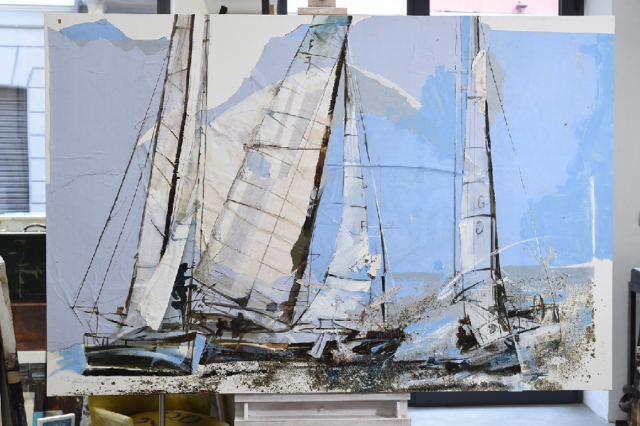 I had noted in my first interview with Ester a certain ambivalence in her attitude to Como eager not to be considered solely as a Como artist, and holding back from a total enchantment with the beauty of our natural setting. It might be that the recent changes in her landscapes derive if only subconsciously from more acceptance of the role of place in her art, but for Ester the lake does not offer enough drama and movement. If only there was a way to combine the dramatic backdrop of sky and mountain with movement on turbulent water.

Her new series of studies of sailing yachts do exactly this – the physicality and layers of the mountains form the backdrop to a water surface chopped up by the graceful lines of boat hull topped by soaring masts and billowing sails.  These are not scenes from Lake Como but the Lario mountains are there in the background. In one way, these studies reproduce an idealised landscape combining the Como profile with a marine foreground.

If Ester’s landscapes have become less abstract, her figure studies have become more so – or at least in her series of three-dimensional ‘statues’ that will soon be on display at the Milan Furniture Fair. Ever in search of the inner essence, Ester had previously avoided detailing the external features of the human form. In her statues she may have retained the vertical dimensions but all human contours have been done away with leaving what she refers to as the imprints of personality. She uses her stylistic theme of stratification to create these textural vertical structures which allow for a whole range of personal interpretation. 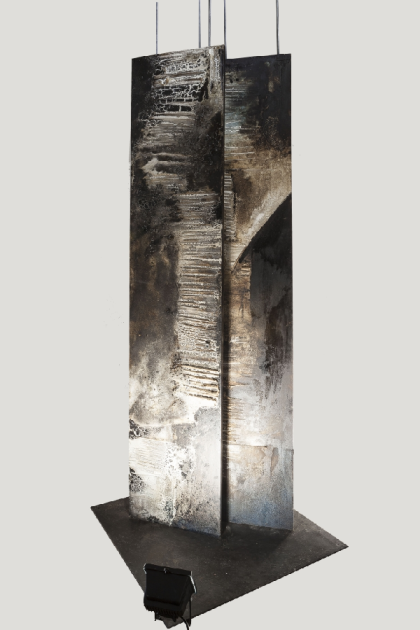 Her output doesn’t stop at that and her studio includes examples of work with furniture, on fabric and with objects such as her series of rusted boxes. All in all, it was fascinating to note how this artist’s work had developed over the last sixteen months, particularly when the changes seem overall to be so positive.

Greater confidence revealed itself in various ways and not least in the broad range in the scale – the actual dimensions – of Ester’s pieces. Some of the statues are tall enough but also some of the sailing boat studies are metres tall. Yet she is also comfortable producing abstracts and landscapes no larger than 20 x 20 cms. I have already noted the freer use of colour but there is the continued bold use of mixed media and texture as well as the heightened drama of subject matter. It all adds up to an energetic output still executed with thoughtfulness and integrity but marked by a growing confidence in the development of her own particular artistic style.

The artist in her studio.

Ester’s personal exhibition at Menaggio entitled ‘Pantone Lake Como‘  can be seen at the Sala Espositiva of the Comune in Piazza Garibaldi. It runs from Wednesday 28th March until Tuesday 3rd April. Her sculptures instead will be on show at the Milan Furniture Fair (Salone del Mobile) which runs from April 17th to 22nd.

If you cannot make it to Menaggio or Milan, the full range of Ester’s output is available to view on her website (esternegretti.com)

I am an Englishman in Como, Northern Italy - definitely both a Euro and Italophile with an interest in modern history, walks in the hills and mountains, and food and wine. I favour 'slow' tourism alongside of 'slow' food.
View all posts by comocompanion →
This entry was posted in Art, Culture, Events, Lake, People, Uncategorized and tagged Art, Artist, Como, ester negretti, Lake Como, landscape, Menaggio, mixed media, sculpture, Via Borgo Vico. Bookmark the permalink.