Posted on November 22, 2016 by comocompanion

Recently I had the pleasure of interviewing Ester Negretti, one of Como’s foremost artists, in her new studio and exhibition space at Via Borgo Vico 82.

Having established that Ester was born, brought up, educated and studied in Como, it was a surprise to discover that she was somewhat ambivalent about her roots.

EN: In spite of being born here, I don’t really feel ‘Comasca’. Maybe it’s because I don’t like the idea of boundaries and borders – nor am I convinced by the influences of a particular place. However I do love Como, its lake and everything.

Ester has over the years developed a very distinctive style which she applies across a range of genres from landscape and figurative painting to abstract and 3D. I was keen to learn more about how this style developed and what debt it owes to Como as a possible source of inspiration or influence.

As the interview progressed I begun to understand her desire to express universality through her art and to avoid being ‘localised’ by scenic lakeside or accurate figurative images.  However I did ask her whether she felt she had roots in the area.

EN: Yes – in that my landscapes are for the major part of this area. I have a strong sense of  ‘Como abstractionism’ which sees these geological formations developing from landscape into abstract geometrical designs.

CC: Could you explain a bit more as to what you mean by ‘abstractionism’?

EN: When learning to paint I initially tended to focus on the surface features of my subjects. So to overcome this I realised that I preferred to paint landscapes out in the open as artists used to do in the past. One day, when ‘on location’ I started to collect some of the materials and objects around me. These seemed to tell the story and reveal the ‘fabric’ of the region – not just reflecting the surface of a landscape but somehow allowing me the artist to enter into a relationship with it. With these materials incorporated into my art, I noted they remain very evident and in the foreground when viewed close up. Yet they become lighter and less distinct as we step back. They seem to invite the viewer to approach closer to them thus creating a viewer reaction that goes beyond actuality, beyond the image, beyond the look or the surface appearance.

She then admitted that on her last trip to Paris she realised that she would undoubtedly have ended up developing a very different style of painting if she had spent time there rather in Como given the fresh quality of the Parisian light, the large scale of urban construction, and interestingly, the predominantly vertical lines of the buildings in the urban landscape in contrast to the predominantly horizontal ‘strata’ of our lakeside landscape.

EN: This is not to say that I am particularly attached to Como. In fact I have done work on the concept of boundaries and on going beyond borders. I belong to a cross-border association of Ticinese artists whose members come from within the ancient area of Insubria. We are not limited by current political boundaries as represented by border crossings.

I agreed that nothing beats living in a border town like Como to convince you of the ultimate artificiality of political borders.

Ester indicated another painting on display. 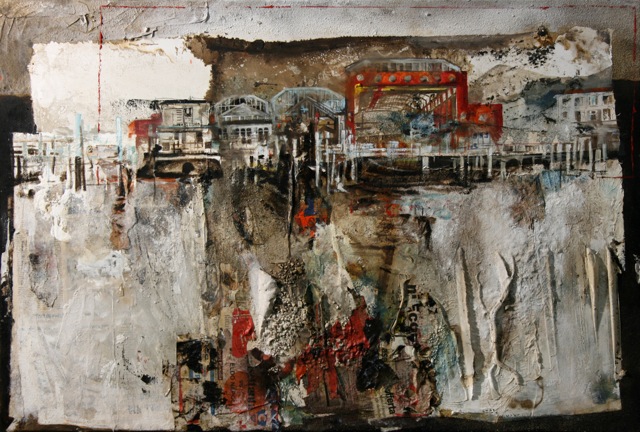 EN: This idea of going beyond borders can be seen in this picture, for example where the black horizontal line breaks and opens up into a series of rectangles offering horizons beyond horizons.

The same concept of defying borders also has an equivalent in my style of figure painting where you will notice that facial details are rarely made distinct.

EN: When I first started painting figures, I would reproduce realistic faces and receive compliments on how life-like they were. I felt bad that viewers’ reactions were being so clearly influenced by the appearances, the surface accuracy of the facial depiction and nothing more. So gradually I made the features on the faces disappear to be replaced instead by signs or impressions. I want to reveal the underlying spirit of a person rather than focus attention on external appearance.

Ester explained how she had chosen to learn her art in the way of the Renaissance masters by being apprenticed to local artists and designers. She in turn now teaches at the Associazione Libico Maraja in Albate (www.libicomaraja.it), an institute set up by the descendants of Libico Maraja whose children’s illustrations are etched in the memories of those growing up in Italy since the last war. 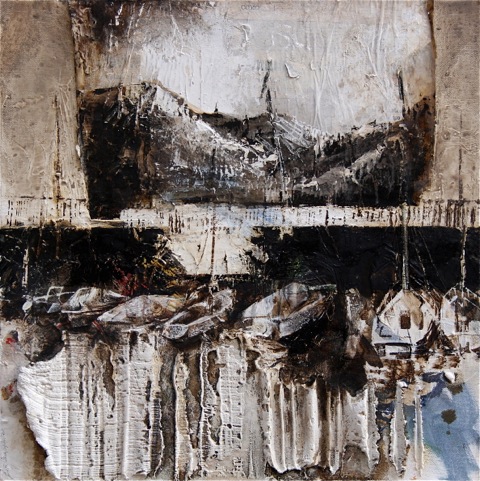 So having noted Ester’s ambivalence towards place and location, as well as her commitment to breaching boundaries, I did however ask if it would be fair to say that her art was taking a part of Como to the rest of the world?

EN: I like that idea – and yes in a way, it’s true. I have sold paintings in a few numbers around the world, – Japan, Australia, New York, Boston, Russia. I have exhibited also in Paris, Frankfurt and Zurich. Success is always welcome but you must always paint for yourself and then the approval of others allows you to keep on going from both an emotional and an economic point of view. It would however be impossible to paint if you focused on a ‘public’ since you must paint to express something that is internal to yourself. 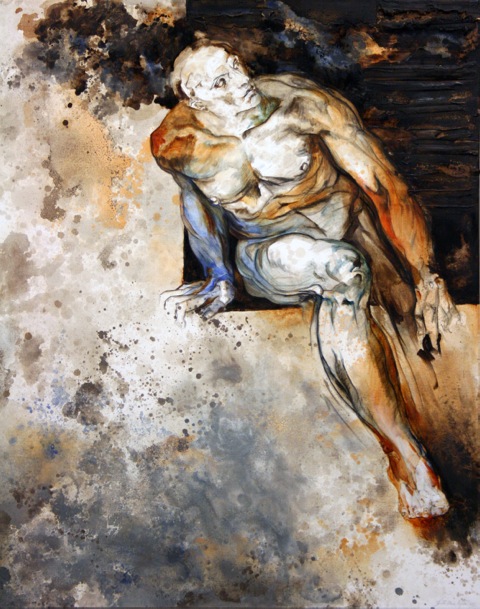 On Ester’s web site (www.esternegretti.com) she has classified part of her output with the theme of Sacred Art. She explained that many of these works were associated with her visit to Burkina Faso in 2014 and the subject of upcoming exhibitions. I had additionally noted an aspect of the romantic spirit of the sublime in her landscapes. Ester confirmed this spiritual element:

EN: One of my main historical influences has been J.M.W. Turner along with Leonardo in the way he uses light and how the change in light during the day changes the aspect of his paintings and gives them movement.

We had previously looked at a technique adopted from Michelangelo  for giving movement to figures. What with these and other references to the Old Masters and her Renaissance-style apprenticeship, this all this led me to ask Ester if she considers herself a ‘traditional’ contemporary artist.

EN: Traditional? Yes – in that our cultural roots are important. Having said that, we must carry on from where our predecessors left off otherwise there is no progress. Contemporary? Also yes, although many artists now consider contemporary art as conceptual. In other words an art that is rational and academic rather than mine which is spiritual and social. For me, above all else, art is a method of communication and a pretext for confronting life. 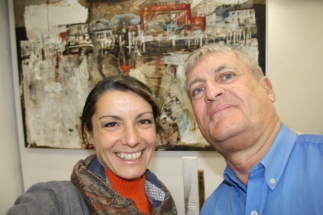 Ester and myself in her atelier in Via Borgo Vico

Ester has only been in her new studio since August. But she has great plans for her exhibition space hoping to include other forms of art and works by other artists. She is very welcoming and was certainly generous to me in both time and patience. She is also playing her part into turning Via Borgo Vico into a fascinating, almost bohemian quarter on the edge of the old town. Thank you, Ester.

I am an Englishman in Como, Northern Italy - definitely both a Euro and Italophile with an interest in modern history, walks in the hills and mountains, and food and wine. I favour 'slow' tourism alongside of 'slow' food.
View all posts by comocompanion →
This entry was posted in Art, Culture, People, Places of interest, Uncategorized and tagged Art, collage, Como, contemporary art, ester negretti, figurative art, insubria, lake art, landscapes, michaelangelo, ticino, via borgovico. Bookmark the permalink.