From Out of the Swamp, Novum Comum – Roman Como

Posted on February 28, 2017 by comocompanion

Statue in the gardens of Villa Olmo

Como is in origin a Roman city named Novum Comum and founded in 59 BCE by none other than Julius Caesar, the father of the Roman Empire.

The Roman presence persisted from then on until the collapse of the western empire approximately 600 years later with the city boasting a population of up to 40,000 in its heyday in the 3rd century AD.

So how can we best get to understand and appreciate this heritage given how the face of the city has since been overlaid with centuries of subsequent developments? Firstly, we can appreciate the broad outline of Novum Comum simply by tracing the line of the defensive walls that broadly follow and in fact incorporate in parts some of the walls originally constructed by Caesar.

The red rectangle depicts the line of the city walls marking the city limits of Roman Como however many (particularly recreational) buildings were placed outside the walls.

Those original walls were 2 metres thick and up to 7 to 8 metres tall and had, as their main point of entry on the southern walls close to the current Porta Torre, a double-arched gateway known as the Porta Pretoria. The remains of this gateway form part of Roman Como still accessible to visitors courtesy of the Museo Archeologico.

Given that many buildings existed outside the city walls (e.g. the Roman Baths, the cemeteries on Viale Varese and the luxury villa on Via Zezio) we also know that, within the rectangular walls and the typically Roman grid street pattern, there would have been temples to the main gods, a forum, theatre, private dwellings and artisan workshops – but no-one knows precisely quite where many of these were placed. And even where there are still remains, they reveal little more than the building outline, bereft as they are of all ornament and decoration. So, whilst it is well worth visiting these remains, may I suggest you first get to appreciate the richness of Roman ornament by visiting the museum. This way the visitor can more easily engage the imagination to overlay fresco, carving and mosaic  to the dry stone foundations on view.

The Roman section of the Museo Archeologico is well laid out and well-labelled albeit only in Italian. But most importantly it gives the visitor scope to imagine what the quality of everyday life was like back in Novum Comum – or at least the life of the wealthy.  Excerpts from the letters of Como’s famous son, Pliny the Younger, testify to the sybaritic splendour of Como’s lakeside location (and to the capacity of the Roman citizens to enjoy it!):

‘Caius Plinius salutes Caninio Rufo. What is the news from Como, mine and your delight? And of your truly pleasant suburban villa? And from the eternal springtime of your porch? And from the rich shade of your plane tree copse..? ‘ Pliny the Younger, Epistles 1.3.1.

The museum contains some marvellous examples of local artisan work including the marble relief  in two parts uncovered in the Piazza San Fedele which is one of the primary candidates for the original site of the forum. 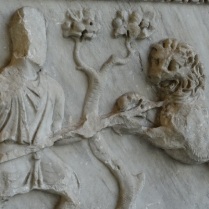 Hunter takes on a lion

The top part shows a formal procession by members of the equestrian order, i.e. knights.  Both they and their horses are finely dressed for the formal parade. The lower scene instead is a more informal depiction of hunting, showing one of the pastimes for young Roman citizens of Como. The detail shows a hunter confronting a lion whilst other parts of the carving show more realistic prey such as deer.

Excavations in 1815 also in Piazza San Fedele uncovered the eight massive columns in Greek marble that the Romans transposed to Novum Comum and which have now again been reused to support the portico in front of the Liceo Volta. 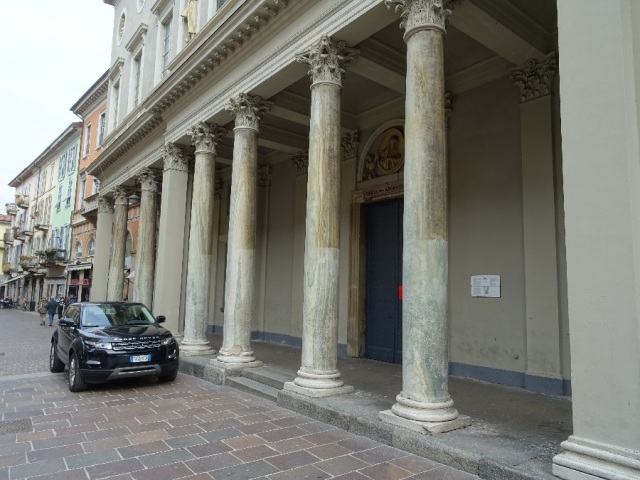 Greek columns reused by the Romans in Piazza San Fedele and since transposed to the Liceo Volta.

Before leaving the museum, do ensure you ask to see the room with the mosaics. It is a separate room on the ground floor housing a mosaic pavement in two parts, the first of which is made up of geometric patterns. 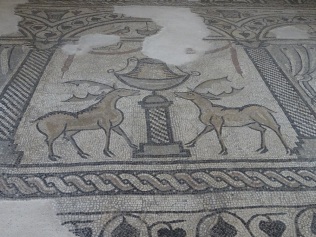 The second and larger part depicts a portico with three arches, the central one showing two deer either side of a vase.  This mosaic pavement originates from a villa just within the city walls in the present-day grounds of the school alongside Palazzo Cernezzi, Como’s town hall.

Now, with the imagination suitably charged with evidence of the Roman decorative arts, let’s take in the dry stone remains demarcating in a different way the everyday life in Como two thousand years ago. And the most extensive remains are the Roman baths below the Valduce car park between the banks of the River Valduce, now canalised and covered by Via Dante, and Viale Lecco. The actual bath complex extends twice as far as current excavations have revealed. This makes Como’s bath complex one of the largest uncovered in Italy – another indication of the importance of Novum Comum as a trading gateway across the Alps for the Roman Empire.  The image below shows the service corridor (running parallel to modern-day Viale Lecco) that links via the arched doorway into the thermal baths. 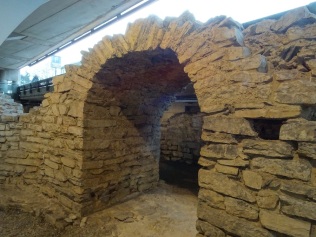 The excavations allow visitors to imagine the layout of contrasting cold rooms (frigidari) and hot rooms (calidari). The complex was first developed in the first century AD and extended one century later – possibly when Roman Como was at its zenith with an estimated population of up to 40,000 people. The complex declined towards the end of the 3rd century with some destruction due to both earthquake and flood. It then lay abandoned on the edges of the Valduce river to later become used as a burial ground. But back in the days of Novum Comum, these baths would have formed a crucial hub for citizens to visit on a regular basis not just to wash or bathe but also to visit the barbers, eat, drink and socialise sat out in its two courtyards – or simply to chill in an environment richly decorated with frescoes, mosaics and statuary.

And as for all those stones used to construct the Roman baths beyond the level of the foundations now visible? They were undoubtedly re-used for future building throughout the Middle Ages and Renaissance such that Como’s Roman ancestry is part of the genetic structure of the modern city.

For those who wish to recreate a sense of Novum Comum for themselves, here are the key references:

For background and access to the Roman Baths, thanks are due to Giovanni Menna, Tour Manager of Como Lake Holiday and local organiser of ‘Aperti per Voi’ , the voluntary organisation that provides free access to the public to historical sites such as Como’s Roman Baths. Giovanni can be contacted on +39 338.200.46.70.

Piazza San Fedele, Como – one of the likeliest locations for the forum in Novum Comum.

I am an Englishman in Como, Northern Italy - definitely both a Euro and Italophile with an interest in modern history, walks in the hills and mountains, and food and wine. I favour 'slow' tourism alongside of 'slow' food.
View all posts by comocompanion →
This entry was posted in Architecture, Culture, History, People, Places of interest, Uncategorized and tagged augustus, baths, caesar, Como, Culture, forum, History, market, mosaics, museo archeologico, novum comum, pliny, roman art, san fedele, valduce. Bookmark the permalink.