Como’s Pope and other Odescalchi

Via Vitani, one of the streets in Como’s old town which takes its name from a former noble family. Others include Via Rusconi, Via Lambertenghi, Via Giovio, Via Natta etc.

Florence has the Medici, Mantua the Gonzagas,  Milan has the Visconti who merged through marriage with the Sforzas.   Como for its part has the Odescalchi. Many of the streets in Como’s old town are named after some of its former aristocratic families. Amongst these is Via Odescalchi along which, in a piazzetta just beyond the deconsecrated church of San Pietro in Atrio, you will find a sculpture of a very austere looking character, Benedetto Odescalchi, better known as Pope Innocent XI who served as pontiff from 1676 until his death in 1689. So in addition to Via Odescalchi,  Como also has a Viale Innocenzo XI .

The first reference to an Odescalchi  (pronounced O-des-cal-key) in Italy can be traced back to 801 when an Odescalchi accompanied the Holy Roman Emperor Charlemagne on one of his Italian campaigns. However it was in 1290 that a certain Giorgio Odescalchi established his family as important residents of Como. He and his successors developed the family’s wealth through finance and mercantile interests.  Como remained the family’s base but branches of their banking interests were established by the sixteenth century in Genoa and Venice. From Venice in particular they established commercial links with Paris, London, Amsterdam and Nuremberg in Bavaria.

Noble families also sought to consolidate their family status through seeking high ecclesiastical office for their offspring other than the primogenitor.  By the sixteenth century a Bernardo Odescalchi had become Bishop of Alessandria and had spread the family influence through missionary work in Poland and Transylvania.

The heraldic shield of the Odescalchi family.

The future Pope, Benedetto Odescalchi,  was born on 16th May 1611 in Como – a plaque can be seen on the side of the villa in Via Volta commemorating the place of his birth.  He gained a positive reputation as a fair and effective civil administrator starting off as a captain in the local militia, then becoming the tax collector for the Marche Region and Governor of the Marche town of Macerata. On the strength of his administrative capabilities as much as his religiosity, he was created a cardinal in March 1645 and appointed to Ferrara. Here he made a good name for his ability to manage the availability of grain and flour thus becoming known as father of the poor. He was elected Pope in September 1676. 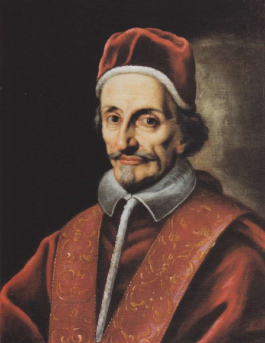 As his statue in Via Odescalchi  and his portrait convey, Pope Innocenzo XI was an austere character. He was known for his ascetic habits and his attempts to abolish nepotism. However, in spite of this, the Odescalchi family would undoubtedly have profited from his papal position and another strong branch of the family established itself in Rome from that time acquiring substantial property in the capital as well as priceless works of art still in the family’s possession. The Pope did however stick to his high moral principles and set about prohibiting gambling and usury within the Papal States as well as closing all places of public entertainment in Rome itself.  His austerity and frugality certainly was of benefit to the papacy which he left considerably better off on his death due to his supreme financial and administrative capabilities. He was sanctified in 1956 by Pope Pio  (Pius) XII. 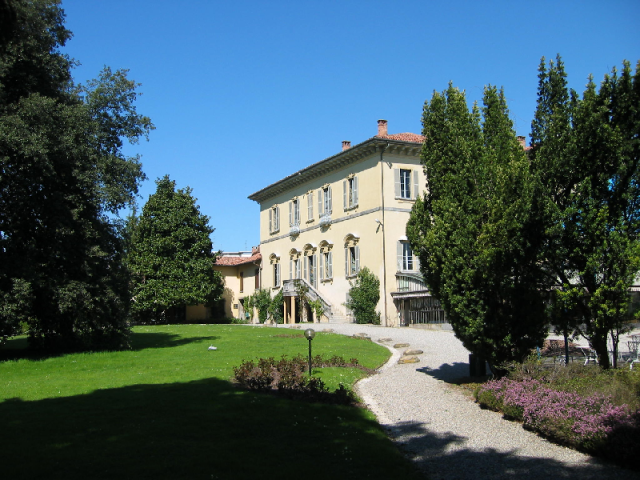 During his life he remained much attached to Como and had a personal residence built for him just a few kilometres away in the small town of Alzate Brianza. This lovely neo-classical villa has now fallen on hard times and is currently up for sale by auction (current reserve price of €2,717,000) having remained unoccupied (and repeatedly vandalised) since closing its doors as a luxury hotel.  Another relative of the Pope had the Palazzo Odescalchi  built for him facing onto Piazza Roma in Como in the 1670s. Half of this palace has been converted into apartments and the rest of the conversion is still in progress.  Some of its former glory is still evident particularly in the frescoes done by the Recchi brothers and the monumental stucco work around the fireplaces.

Frescoes by the Recchi brothers

Fireplace with the Odescalchi crest

The Odescalchi family was also the original owner of Como’s most renowned villa, the Villa Olmo. The land for this villa was initially purchased by the Odescalchi in 1664 who acquired it from the Abbey of Santa Maria di Vico. The current villa was constructed on the site in the eighteenth century and occupied by the family until the Como branch married into the Raimondi in the early nineteenth century. The Raimondis sold the villa on to a branch of the Milan-based Visconti  family, the Duke Visconti di Modrone, in 1883.

Film director, Luchino Visconti di Modrone was a member of a local noble family who bought Villa Olmo from the Odescalchi-Raimondi dynasty. He himself frequented nearby Villa Erba for summer holidays.

It is the famous serpent emblem of the Visconti family which now crowns the entrance to the villa. The neo-realist film director, Luchino Visconti (1906-1976) would spend summer holidays in the nearby Villa Erba in Cernobbio.  Villa Olmo was passed on to the Comune of Como in 1925.

Like most other noble families, the Odescalchi protected their privileged position through securing titles and making tactical marriages with other noble families. Following Benedetto’s death, the family secured a string of noble titles in Hungary and Slovenia from the then Hapsburg Holy Roman Emperor, Leopold I. Benedetto’s sister, Lucrezia married into the Erba dynasty – a family that also had originated in Como.  In the 1820s the Como Odescalchis joined the Raimondi family.  One visible result of all the inter marriages was the way names became longer and longer.  It was the illegitimate but recognised daughter of Marquis Giorgio Raimondi Mantica Odescalchi who, at the age of seventeen, became very briefly the second wife of the fifty-two year old hero of the Risorgimento, Giuseppe Garibaldi . The marriage was annulled almost as soon as completed due to the likely infidelity of the bride. One of the witnesses to the marriage was a Count Giulio Porro Lambertenghi – another name appearing amongst the street names in Como’s centre. 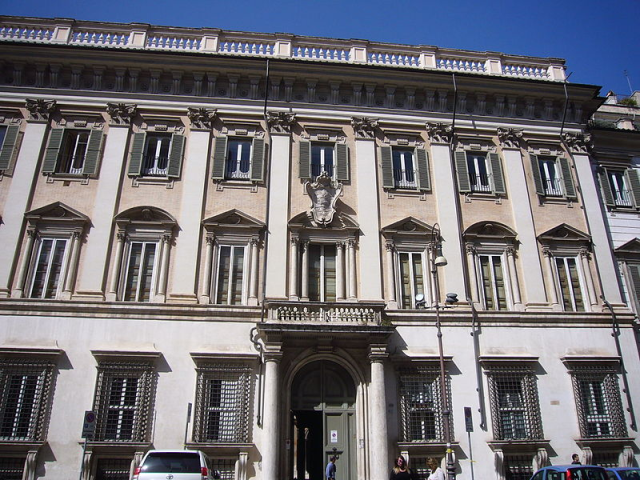 Palazzo Chigi Odescalchi, in Piazza Santi Apostoli in Rome. Bought in 1745 and still the current home of Prince Odescalchi and family.

Benedetto Odescalchi  (Pope Innocent XI) died without heir but his niece Lucrezia maintained the family line through marriage to the Erba family and a strong Odescalchi dynasty established itself in Rome from then (seventeenth century to today), all in spite of the former pope’s disapproval of nepotism and usury. 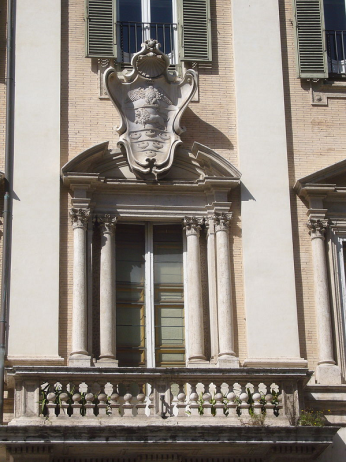 Detail of the baroque exterior of Palazzo Chigi Odescalchi showing the family crest.

In fact the current Prince Odescalchi lives in the Palazzo Chigi-Odescalchi on Piazza Santi Apostoli in Rome. The exterior of the palace was designed by Gian Lorenzo Bernini in around 1665 and in spite of being restored after extensive fire damage, remains a superlative example of Italian Baroque architecture. The palace was purchased by Prince Baldasssare Odescalchi in 1745. This is just one of the many properties owned by the family in and around Rome. Of note also is the Castello Orsini-Odescalchi in Bracciano. This was inherited as the feudal estate of Bracciano passed from the Orsinis to the Odescalchis towards the end of the seventeenth century. The castle is now open to the public as well as being used for weddings and other events. 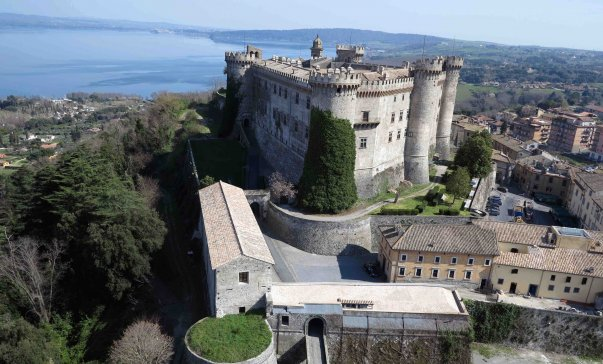 Castello Orsini-Odescalchi at Bracciano with the lake in the background.

The family do however retain an interest in another of their castles – the Castello Odescalchi di Santa Marinella, on the coast near to Civitavecchia. This castle originates from the fifteenth century and was bought by a more recent ‘Baldassare’ in 1888. He acquired it in an auction for very little just as today one could acquire the Villa Odescalchi in Alzate Brianza for relatively little if wishing to participate in the auction on the 15th July.

Baldassare Odescalchi went on to be elected to the Italian Senate in 1896. The family developed a beach resort linked to the castle which became a favoured spot for film stars and celebrities in the 1950s with famous guests including Totò, Alberto Sordi, Roberto Rossellini and Ingrid Bergman. It is now also rented out for weddings and retained for the family’s own use as was testified in an interview back in 2014 in Grazia with Sofia Odescalchi, daughter of the current Prince and duly described as an ‘It’ girl!

Sofia, renowned for dining under a Caravaggio in the family’s home on Piazza Santi Apostoli and for spending weekends at the seaside castle in Santa Marinella, was keen to present herself as rather ordinary in her Grazia interview. Here is an excerpt  included just to give an indication of how current aristocrats seek to retain low, understated profiles of banal normality if only publicly.

Grazia: Sofia, must I address you as Princess?

Sofia: Stop pulling my leg! It’s great having an aristocratic name and all the history but all the rest is a disadvantage.

Sofia: Everyone thinks you must be a spoilt brat used to having everything – but it’s not like that.

Grazia: Do you live by yourself?

Sofia: Yes, in a studio flat with a small terrace. I manage it all myself.

Sofia: Yes, I find them exhilarating.

Sofia: To work in the fashion industry.

Grazia: Have you got your own style?

Sofia: Yes, it’s a mix of vintage pieces I pick up in London and items stolen from my mother’s wardrobe. I love soft, capacious handbags like those of Zanellato. I always wear a chain necklace.

Grazia: Do you ever feel like a prisoner in a gilded cage?

Sofia: No – and then I only go to my parents’ castle for a bit of peace – and the sea!

Sofia with her mother Lucia Odescalchi

If you would like to purchase Villa Odescalchi in Alzate Brianza at auction, there is still time to submit your interest prior to the bidding on https://www.realestatediscount.it/aste-immobili/villa-dei-papi-odescalchi-1162/.

If on the other hand, you wanted to arrange an event at the Castello Odescalchi in Santa Marinella, look at its website for further details.

If you would prefer an Odescalchi connection in Como, enquire into purchasing one of the renovated apartments in the Palazzo Odescalchi at  http://www.palazzo-odescalchicomo.it/eng/

I am an Englishman in Como, Northern Italy - definitely both a Euro and Italophile with an interest in modern history, walks in the hills and mountains, and food and wine. I favour 'slow' tourism alongside of 'slow' food.
View all posts by comocompanion →
This entry was posted in Architecture, Culture, History, People, Places of interest, Uncategorized and tagged Alzate Brianza, aristocrats, Castello, Como, heraldry, History, Innocent XI, Innocenzo XI, nobility, Odescalchi, Pope, property auction, religion, Rome, stemme. Bookmark the permalink.