The Vallassina lies in the Lario Triangle between Como and Lecco, based on the town of Asso on the upper reaches of the River Lambro. From September to December 1943 this area hosted numerous refugees from the nazi-fascist state thus witnessing the humanity and inhumanity, the heroism and the disaster caused by the Holocaust.

The armistice signed at the start of September between the Italian government (which had dismissed Mussolini from power back in July) and the allies legitimated the allied occupation in Southern Italy but increased the oppression in the north. Here the Nazis immediately occupied the territory and re-established Mussolini as head of a puppet government known as the RSI (‘Socialist’ Republic of Italy). The short-lived elation created by the armistice was followed by a ratcheting up of repression and the loss of any remaining hope of safety for all of the foreign Jews who had mostly been held in internment since 1940. Now there was no barrier to them being deported to the extermination camps in Eastern Europe. And to their numbers were added all Italian Jews in the occupied zone who now also became subject to arrest and deportation following an order published by the RSI on the 1st December 1943. Thus from this date the Italian Nazi-fascist state acted out its inhuman ideology through its direct involvement in the Nazi Holocaust.

Monte San Primo (1600m), the highest of the Pre-Alp peaks in the Lario Triangle

The Vallassina was a natural choice for refugees and those seeking to avoid the attention of the authorities. Firstly it was readily accessible by train from Milan (an advantage that proved short-lived since the ease of access also favoured the Nazi authorities). As a holiday destination in the foothills of the Alps, it offered a variety of accommodation in hotels or in many of the second homes owned by those beginning to form part of the active resistance to occupation. Lastly, it was on a route to the clandestine border crossing points into neutral Switzerland that were well known and frequently used by local smugglers (see Como and Contraband – A Romanticised Legacy? for more on the local smuggling tradition).

Alongside the refugees, some initiatives of spontaneous resistance began to take shape in the area; for example the ex-army officer Colonel Gatta set up a partisan brigade based on the Pian del Tivano right by Sormano. 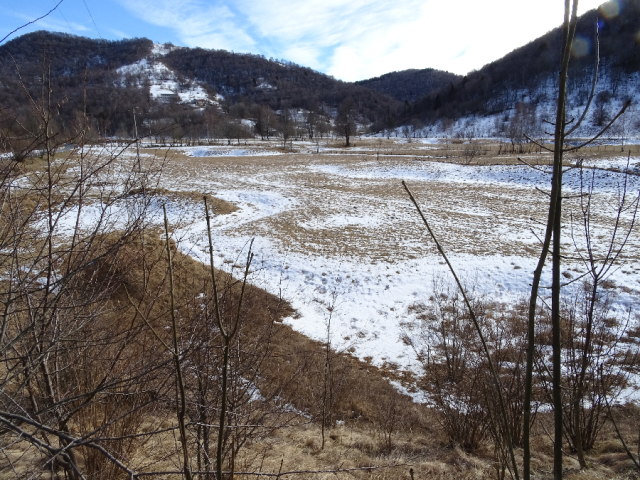 Pian Del Tivano where some of the first armed partisans in Alta Brianza gathered under the leadership of Major Gatta. 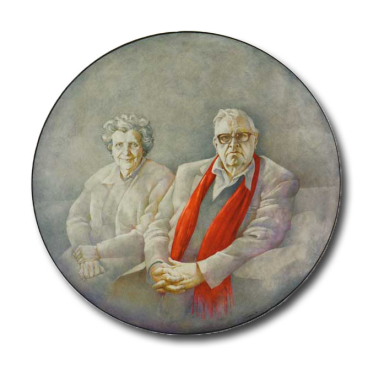 Ada Tommasi and Mario de Micheli were two nationally renowned communists who sought refuge in Sormano and organised ‘viaggi della salvezza’ from there for Jews throughout the Nazi Occupation.

This group in turn connected with the partisans in the Erba/Ponte Lambro area led by Giancarlo Puecher. The CLN (Comitato di Liberazione Nazionale), the organisation responsible for coordinating resistance in the north, set up links through the Vallassina for smuggling out ex-allied prisoners of war. Others such as the communist married couple Ada Tommasi and Mario De Micheli, came to Sormano living there secretly and aiding Jews in making their escape into Switzerland.

The Catholic organisation known as OSCAR was also beginning to co-ordinate the assistance to refugees along the so-called ‘viaggi della salvezza’ offered by priests and parishioners living in the border areas.

The young priest of Sormano, Don Carlo Banfi,  was one who spontaneously set about offering help to those who had arrived on his doorstep seeking safety. He hid and housed Ada Tommasi and Mario De Micheli in the basement of his vicarage. He joined them in organising escapes into Switzerland for Jews, ex-allied prisoners of war or other enemies of the state.  These escapes were led usually by the local smugglers who had detailed knowledge of the clandestine crossing points. These clandestine routes were becoming vital since the Nazi authorities had quickly blocked off the official crossing points in Varese and Como. The Swiss authorities had also closed the border in response to the Nazi occupation.

Sormano and the parish church at the time of Don Carlo Banfi. Taken from a postcard in a private collection produced by Edizioni Prato Bambina, Sormano

However, as summer turned to winter in November 1943, these guides reported that the crossings were becoming dangerous due to the cold. Don Banfi wanted to check this for himself and so he decided to join the next planned evacuation. All went well. The refugees had gained safety across the border but Don Banfi was detained by the Swiss Border guards and warned that he was committing an offence in crossing the border secretly. However they allowed him to return home on this occasion. Back in Sormano, a much larger group of Jewish refugees were awaiting safe passage and they were under time pressure since the Nazi authorities were every day securing control of more of the territory. There were even rumours that they planned to parachute troops into the Pian del Tivano to deal both with the partisans forming there and the clandestine refugee traffic. Don Banfi had no time to make proper preparations for this next journey into Switzerland. Instead he left on November 22nd hurriedly leading a group of 16 Jews which included both some young children and some elderly who would face real difficulty in managing the exhausting two-day journey of mountain climb and descent by foot. 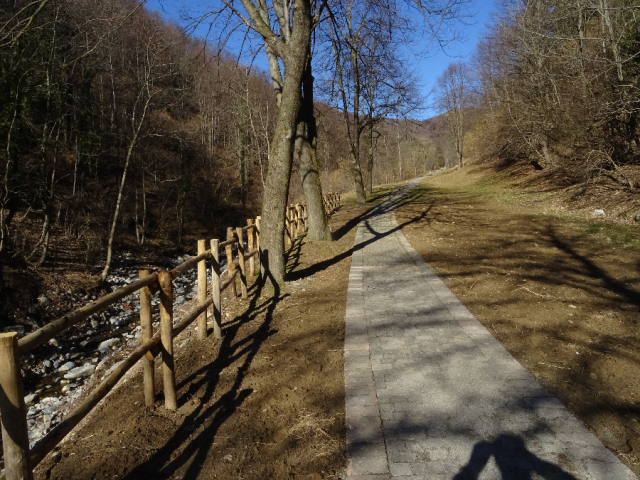 Don Banfi would probably have led his group up this path leading to the infamous Muro di Sormano now renowned as one of the steepest ascents on any road cycling race.

Don Banfi set off on this dangerous journey with 3 accomplices in addition to the group of 16 refugees. Along the way they received help from the country people working in the woods and, when they finally reached the border, from the Italian Customs Police (Guardia di Finanza) who directed them to avoid military patrols and pointed out where best to cross the border fencing. More detail of the heroic role played by the Guardia di Finanza in assisting refugees is reported in our article Como’s ‘Viaggi della Salvezza’ – In Memory of the Holocaust. 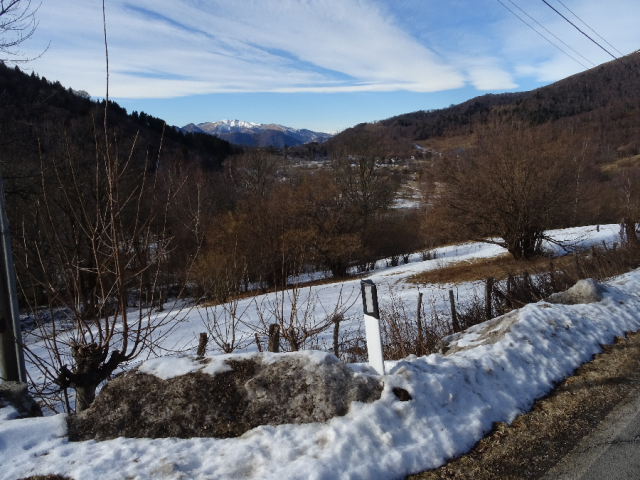 Pian del Tivano – the escapees would have got their first glimpse of Switzerland as they entered the Pian del Tivano after descending from the Colma del Piano at 1120m.

The route had taken them from Sormano on to the Pian del Tivano and down to Nesso. They then had crossed the western leg of the lake to get to Torrigia, staying  the night at an inn before crossing over to Switzerland along the border by Mount Bisbino – a long and arduous two-day journey which had left most of the group totally exhausted by the time they had crossed over into Switzerland. 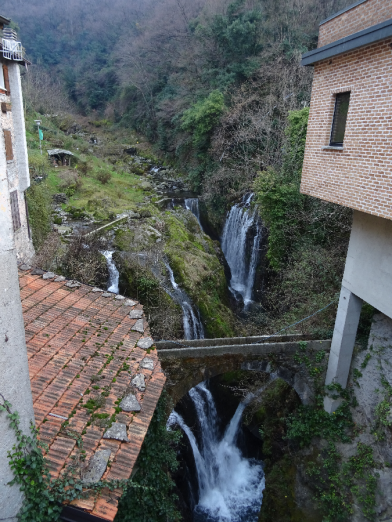 Orrido di Nesso, a welcome sight after the long climb and descent to the lake.

Most were unable to walk any further down into the valley. Don Banfi and his accomplices reported to the Swiss border police advising them to bring down the exhausted refugees to safety. He however could not avoid arrest this time but received a lenient sentence partly thanks to the intervention of the Archbishop of Lugano who also passed on to Don Banfi the advice he had received from the Archbishop of Milan, Cardinal Schuster, stating he should not in any way attempt to return into Italy since the Nazi-fascist authorities were seeking harsh retribution. So Don Banfi remained in Switzerland working as a chaplain in internment camps until the war ended.

But back in Sormano, the retribution and repression was mounting.  In spite of this,  many of Don Banfi’s parishioners and the husband and wife team of Ada and Marco De Micheli continued to assist refugees. They were unable to save all Jews as the authorities  increased their control over the territory. A local inhabitant, Liliana Picciotto Fargion, has provided testimony documenting the names of those Jews arrested in Sormano at around this time and subsequently deported to extermination camps.  None of those listed below were to survive. Their names have been  listed here out of respect for their  sacrifice and to illustrate how the disaster of the Holocaust directly impacted Italy under the Nazi-fascist regime of the RSI.

The younger daughter of the Bardavid family, Graziella, was saved since she had been entrusted to a married couple living in Asso named Maria Bonaiti and Giuseppe Mazza. Both Maria and Giuseppe were awarded the title ‘Just Among Nations’ in 1998 by the Israeli organisation Yad Vashem.

This medieval bridge at the foot of the Orrido di Nesso as the river enters the lake would have marked the end of the first day’s gruelling ‘viaggio della salvezza’ for Don Banfi’s party of 16 Jewish refugees.

Reward with the title ‘Just Among Nations’ was also conferred on the communist couple, Ada Tommasi and Mario De Micheli as well as on Don Carlo Banfi.

Don Carlo Banfi was also honoured with the Gold Medallion in 1955 by the Union of the Italian Hebrew Community. He returned to Italy after the war and took up the priesthood in Varese until the 1970s. He is an unsung hero whose impact went well beyond his deeds through the example of moral and physical courage he provided to colleagues and parishioners alike. Thanks to his example, other locals were inspired to maintain their humane values and to continue providing assistance to  evacuees wherever possible in spite of the threats and acts of state retribution. For me what I find the most inspiring is his willingness to work alongside whoever had a humane spirit irrespective of their political or religious affiliations. This attitude, exemplified by people such as Don Carlo, was apparently briefly but gloriously shared by many during those years of resistance and its spirit dominated the positive collaboration across ideologies in the drafting of the constitution after the war.

The sources of information for this article came from the research undertaken by the Istituto Di Storia Contemporanea ‘Pier Amato Perretta’ based in Como and to the publication issued by the Sormano Comune, the Sormano Alpine Group and the Parish of Saint Ambrogio entitled ‘Don Carlo Banfi: Un Eroe Sconosciuto’.

I am an Englishman in Como, Northern Italy - definitely both a Euro and Italophile with an interest in modern history, walks in the hills and mountains, and food and wine. I favour 'slow' tourism alongside of 'slow' food.
View all posts by comocompanion →
This entry was posted in History, People, Politics, Uncategorized and tagged church, Don Carlo Banfi, History, Holocaust victims, Muro di Sormano, Nesso, Pian del Tivano, resistance, Schuster, Sormano, Valassina, Vallasina. Bookmark the permalink.

3 Responses to Heroism and Disaster in the Vallassina – Holocaust Memorial Day, January 27th