Posted on September 15, 2017 by comocompanion

As Les Halles was to Paris or Seven Dials to London, so was the Cortesella to Como – the lost heart of the old town. The Cortesella (named after Via Cortesella) was a warren of narrow streets and alleyways to the south of Via Fontana running from Piazza Volta to Piazza Cavour and north of Via Muralto. It used to provide a tortuous route through to Piazza Cavour which was Como’s port until built over in 1869. At its centre was the church of San Nazaro built on the site of a roman basilica and supposedly housing a splinter from the cross as well as a tooth of St.Andrew’s.

Over time the district deteriorated as the buildings became ever more chaotic, the population ever denser, and the sanitation and services ever less adequate. Plans for its redevelopment were made from as early on as 1840. Further plans were put forward in 1891 and 1910 but nothing was actually done until demolition began in 1938 and ended finally in 1946. 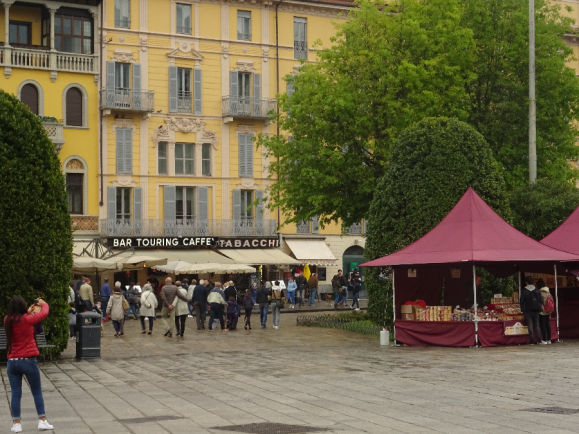 Piazza Cavour today looking east – Cortesella was to the south west of the piazza.

Yet as with Les Halles and other colourful inner city districts, the reasons for redevelopment were numerous. The primary motive was financial. Cortesella lay beside the wealthiest part of the old town alongside Piazza Duomo and so redevelopers were more than willing to invest in the project. Secondly the area had become anarchic in the eyes of the fascist regime which was paranoid about social control and the opportunities the area provided for ‘clandestine’ meetings in its maze of streets.

After all, it was already home to the irrepressible socialist barber Ercole Bianchi whose waiting clients in his hair salon had ample opportunity to bad-mouth the authorities. Ercole later moved his salon just out of the Cortesella into nearby Via Vittani which had a reputation as ‘off-limits’ to the authorities going back to the French Revolution when its Osteria del Cervo was known as a coven for Jacobins.

Additionally the area was increasingly seen as an affront to public decency housing at least three brothels or as they are euphemistically called ‘case di tolleranza’. And from an urban planning perspective, there was a need to open up north-south access to Piazza Cavour and the lakeside. 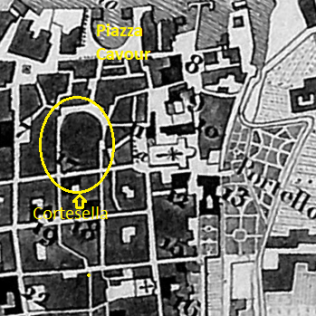 The left hand map is a detail of Como circa 1850 – note the curved outline to the Cortesella district leading some to suggest it was built around a former Roman arena. Piazza Cavour was still Como’s port until 1869. The right hand map shows the 1938 renewal plan. The dotted line is the boundary of the redevelopment area. The black outline identifies original facades to be maintained. The red outlines new construction e.g. Banca d’Italia superimposed on the Church of San Nazaro. 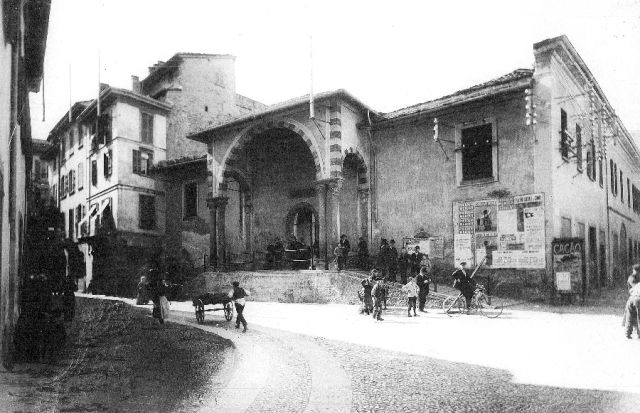 Cortesella’s Macello Pubblico built in 1716 as the town’s meat market.

Yet, as with Les Halles, the demolition of the old quarter has provoked growing nostalgia for this lost popular district – for its spirit of independence, its transgressive atmosphere and for its lost architectural gems. Those gems included the 12th century villa of the Corticella family which collapsed ‘spontaneously’ during the demolition, the 13th century Casa Vietti which was initially saved from demolition but, with financial interests pushing for a blank canvas for redevelopment, was set on fire with only a few columns from the loggia and courtyard saved and now stored ignominiously in the cellars of the Civic Museum. Additionally the communal slaughter house and meat market, built in 1716, was destroyed. This was originally built to do away with all the individual butchers in the area and improve hygiene. The meat market existed in this building until the end of the 19th century when it turned to selling fish and vegetables.

Via Juvara, behind the Banca d’Italia where San Nazaro once stood – a modern glimpse of the old quarter.

The church of San Nazaro was destroyed but its interior fittings were reused in the modern church built in the outer district of Lora in 1938, the Chiesa of Santi Simone, Giuda e Andrea. Presumably the splinter from the cross and the St. Andrew tooth were transferred as well. The loss of this architectural heritage occurred in spite of the efforts of Como’s two most renowned architects, the rationalist Giuseppe Terragni and the mannerist Federico Frigerio.

Over time our attitudes towards conservation have become more favourable and no doubt the council’s outright rejection of Terragni’s plan to incorporate the courtyard of the Casa Vietti within his modernist structures would not happen today.

Whilst old Les Halles has been immortalised in the works of Victor Hugo, Emile Zola and others, and Seven Dials by Charles Dickens, old Cortesella has instead been immortalised on film (now safely digitised and available to all on YouTube thanks to Nodo Libri). Nodo Libri safeguarded their copy of a documentary made before and during the demolition works by Ico Parisi, a Comascan designer.

The AXA Building, Via Boldoni and the corner of Piazza Perretta.

The state sponsors of the film have managed to lose both the original and any of the copies entrusted to them. It is a silent black and white work with occasional losses of quality but very well worth watching for the everyday life it captures and for its skillful cinematography. It was intended originally to be a ‘before and after’ study providing propaganda for this major urban renewal project. However only the first part was completed and its effect seems to be totally opposite to that intended. It conjures up a way of life lost in the past, victim to the redevelopment goals of a paranoid police state. Scenes of the fascist military hierarchy staging their involvement in the demolition with delicate strokes of their pickaxes reveals if unwittingly the arrogance of power. Even if possibly unintended, this film ensures the immortality of the quarter and the ongoing transition of the Cortesella from living memory through nostalgia and into myth.

The following sources of information were used for this article:

I am an Englishman in Como, Northern Italy - definitely both a Euro and Italophile with an interest in modern history, walks in the hills and mountains, and food and wine. I favour 'slow' tourism alongside of 'slow' food.
View all posts by comocompanion →
This entry was posted in Architecture, Culture, History, People, Places of interest, Politics, Uncategorized and tagged Architecture, Banca d'Italia, Como, Cortesella, Frigerio, les halles, nostalgia, Parisi, Piazza Duomo, redevelopment, Terragni. Bookmark the permalink.