Como’s Heart Lies in the Bronx 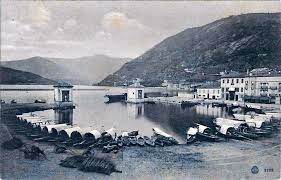 Back in time, Como had a heart – a place from where the lifeblood of the city radiated out up to and  beyond the city walls. This was the old port which, resembling a key piece in a jigsaw puzzle, anchored the city to its lake.

Then, in 1860, the city government (the Comune) decided to fill in the port to create the only one of Como’s piazzas to face the lake – Piazza Cavour. But the new piazza looked bare and soulless, as it does quite frankly to this day. So in 1870, a Milanese financier and philanthropist, Sebastiano Mondolfo, gave the city 20,000 lire to purchase a fountain from the privately owned Palazzo Litta in Lainate. 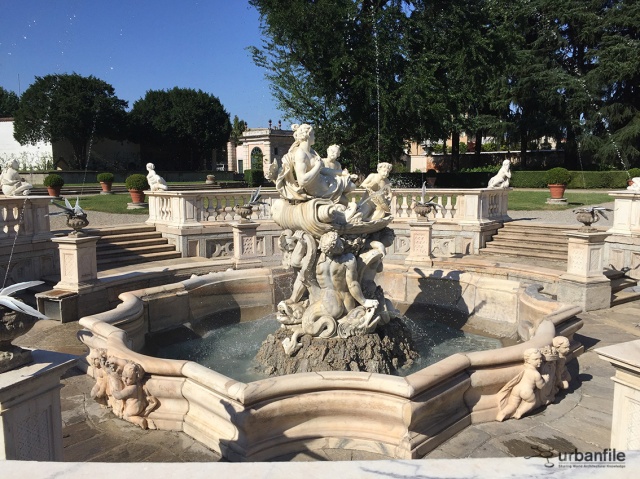 The Fontana di Galatea in the gardens of Palazzo Litta in Lainate. Sebastiano Mondolfo’s first idea was to buy this fountain to place in Piazza Cavour.

This was the baroque Fontana di Galatea built from 1720 to 1786.  This idea was rejected on the grounds that it was probably unethical to purchase and transform a privately owned work of art into a piece of public sculpture. So Mondolfo changed his plan and instead two years later hired a local sculptor, Biagio Catella, to design a fountain for Piazza Cavour.

Photo copyright of Vasconi of Piazza Cavour in the 1890s with Biagio Catella’s fountain fully working.

In almost record time, Biagio Catella created a three-tiered fountain carved from Carrara marble representing a swan at its apex surrounded by a variety of sea creatures including sea horses and dolphins ridden by cherubs. These creatures rested on shells supported by mermaids and mermen. The fountain also served the practical purpose of providing drinking water.  On September 23rd 1872, the water to the fountain was turned on. 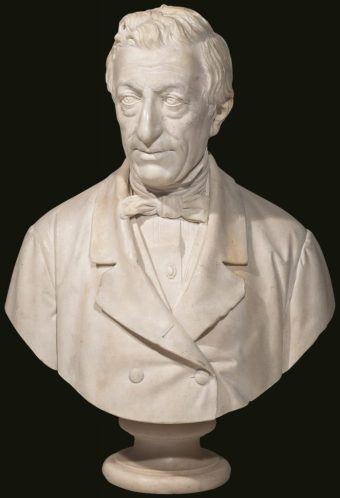 Sebastiano Mondolfo, Milan financier and philanthropist who had a second home, the Villa Volontè, in Como.

But from the start, some of Como’s inhabitants began to find fault with the fountain on both practical and aesthetic grounds. The main practical concern was that the supply of drinking water to the poor inhabitants of the area, which included at the time the labyrinthine quarter known as the Cortisella, would cause shortages at the water’s source on Monte Olimpino.  The aesthetic judgements ranged from complaints that the swan more closely resembled a goose and that the naked torsos of mermaids were inappropriate for children and disturbed  the sensibilities of the more puritanically minded. Others felt that the imagery of sea creatures like dolphins and sea horses was inappropriate to its setting alongside a freshwater lake. Thus the fountain became the subject of polemical debate. Sebastiano Mondolfo died in 1873 and was therefore spared having to witness his act of selfless generosity to the city where he maintained his weekend retreat being treated so ungratefully and scorned by the vociferous band of ‘anti-fontanisti’.

The fate of the fountain went from bad to worse. The constant flooding of Piazza Cavour from the lake and the erosion of the landfill under the piazza caused damage to the fountain which the Comune did not have the resources to repair. The Comune either could not or would not find the funds to maintain it. The fountain was dismantled and removed from Piazza Cavour in 1891, a mere 19 years later. It stayed in storage with a price tag of 3,500 lire to anyone prepared to take it off the Comune’s hands.

The fountain’s saviour was the American oligarch founder of Standard Oil, the multi-millionaire William Rockefeller Jnr, who had much admired the fountain on previous visits to Como. He bought it in 1902 from the Comune for the asking price and then paid out $25,000 to transport it to New York City where it was installed in the Bronx Zoo in 1903. It was subsequently relocated to its current location in the zoo in 1910. The population of New York City fortunately took a very much more positive attitude to the fountain than the citizens of Como. It was even designated an official New York City landmark in 1968, and there it stands to this day. It is apparently a popular backdrop for newly-married couples posing for photographs during the post-wedding ‘passeggiata romantica’. 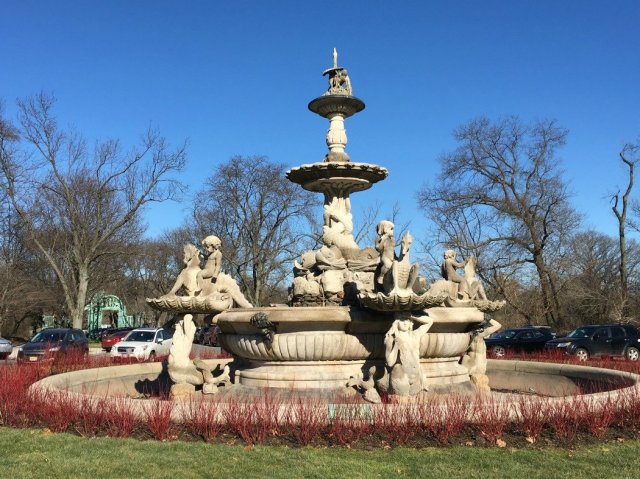 The Rockefeller Fountain in the Bronx Zoo

While the fountain is now commonly referred to as the Rockefeller Fountain, there have been no attempts to deny its place of origin. The inscription on the fountain reads:

FROM THE CITY OF COMO, ITALY

WAS PRESENTED BY WILLIAM ROCKEFELLER

AND BY HIM ERECTED ON ITS PRESENT SITE 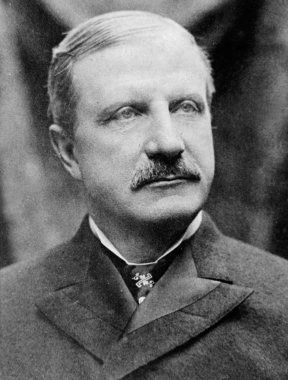 In more recent times, the fountain has had to undergo extensive restoration and one very imaginative Como citizen was able to take full advantage of this cultural link to New York. Daniele Travi, the owner with his wife of the Sorsasso vineyard in Domaso, was guest of honour back in September 2008 at the ceremony revealing the latest work of restoration.

Daniele Travi was billed as the ‘special envoy’ to the Como City Council sharing top billing with the Italo-American tenor Michael Amante at the unveiling ceremony. As Como’s Ambassador Daniele Travi stated:

It is very rewarding for us to have this beloved work of art representing Como here at the Bronx Zoo. Como and its people are deeply touched and proud that this symbol of Italy – and our hometown in particular – graces such a place of beauty and inspiration in New York City. Thank you for caring for ‘Our’ Italian Fountain. 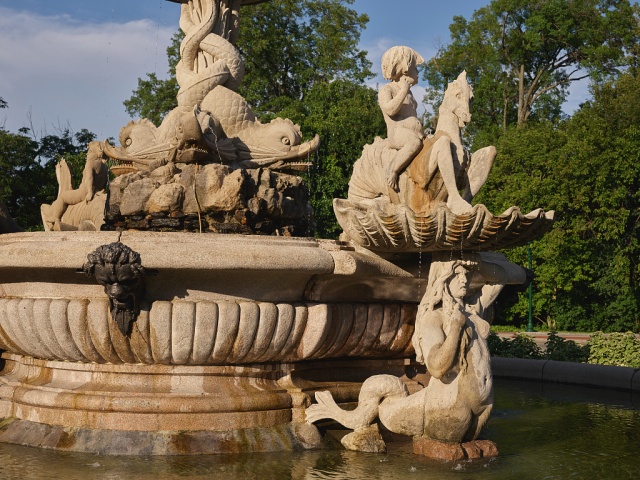 The Rockefeller Fountain — named for benefactor William Rockefeller — at the Bronx Zoo in The Bronx, one of five county-level divisions within sprawling New York City, New York. The largest metropolitan zoo in the United States and among the largest in the world, this zoo, which opened in 1899, attracts more than two million visitors each year. It comprises 265 acres of parkland and naturalistic habitats, through which the Bronx River flows. Dedicated here in 1903, the fountain once stood in Como, Italy.

Reports of the ceremony went on to mention how the ‘celebrations were enhanced by a donation of wine from Como’s only vineyard by Daniele Travi’. Needless to say, that vineyard was Il Sorsasso in Domaso.

Piazza Cavour – a space looking for a function

Meanwhile Piazza Cavour remains a piazza without a heart – an empty space left looking for a role. While nearby Piazza Volta rocks with life and activity, Piazza Cavour still hasn’t found a true purpose. It is unable to exploit its one major advantage of looking directly out on to the lake on its north side because of the major traffic route that separates it. And unless something is done about that, there is no reason why the new lakefront will in any way enhance this public space. At least the flood defences may at last solve the erosion issues affecting Piazza Cavour’s foundations so maybe any future donation of public art might stand a better chance of acceptance and survival within Como’s hostile civic environment.

One wing of the neo-classical Villa Volontè, on the lakefront near to Villa Olmo. This was the weekend retreat of Sebastiano Mondolfo.

I am an Englishman in Como, Northern Italy - definitely both a Euro and Italophile with an interest in modern history, walks in the hills and mountains, and food and wine. I favour 'slow' tourism alongside of 'slow' food.
View all posts by comocompanion →
This entry was posted in Art, Culture, History, People, Uncategorized and tagged Bronx Zoo, Daniele Travi, fountains, marble, Sebastiano Mondolfo, sorsasso, Villa Volonte, William Rockefeller. Bookmark the permalink.