Como – Its Role in the Birth of a Nation

The Republic Day holiday comes up on June 2nd to celebrate the result of the referendum held on June 2nd 1946 to determine the constitutional form of the Italian state following the overthrow of fascism.  I thought this ‘national’ celebration might provide a sufficient hook to consider Como’s role in the birth of the Italian nation, at a particular moment when it took a radical lead alongside Milan and Brescia in the Lombardy/Veneto insurrection against the Austro-Hungarian Empire. 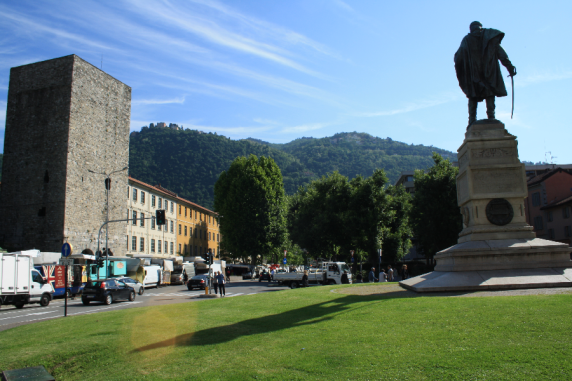 The photo above is taken from behind the Swiss sculptor Vincenzo Vela’s statue of Giuseppe Garibaldi in Piazza Vittoria looking alongside the city walls to the Porta Torre and Viale Carlo Cattaneo.  Now view the painting by Francesco Capiaghi depicting the same area but, as the title states, commemorating a very special event – the surrender of the Austrian army to the Comaschi insurrectionists on the 22nd March in that year of European-wide rebellion, 1848.

Similar popular uprisings referred to subsequently as the 5 days (cinque giornate) famously took place in Milan and for a slightly longer period in Brescia. Como’s uprising was significant – a prelude to the prolonged struggle for independence that would culminate locally in Garibaldi’s defeat of the Austrian army just outside of Como at San Fermo in 1859 – henceforth known as San Fermo della Battaglia.

Back on the 18th March 1848, inspired by insurrectionists in Milan, Como citizens began to gather  around the then Town Hall (in renamed Via Cinque Giornate) to demand the setting up of a Civil Guard, a risky  act of open insurrection given the number of Austrian troops in at least 5 separate barracks around the town. However the foreign occupation seemed to unite various strata of civil society from aristocrats, students, artisans alongside the early stirrings of an urban proletariat all under the leadership of their town councillors. 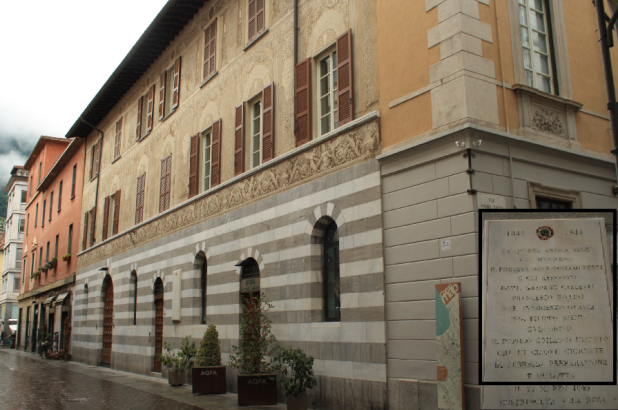 The old Town Hall in Via Cinque Giornate, Como. INSET: Plaque commemorating the town councillors who led the revolt.

On the 20th March , physical and moral support for the rebels came from a group of exiles and volunteers from Switzerland who, on arriving at Villa Olmo, faced up to an Austrian army patrol forcing them back into barracks. The rebel numbers were later augmented by a further 500 volunteers and arms arriving by steam boat from around the lake. Meanwhile additional Austrian troops were sent up from Mariano Comense and Cantu to the barracks in the ex-convent of San Francesco (the remaining part of which is now the Spazio Ratti Exhibition Hall). The Austrians demanded the immediate disbandment of the Civil Guard. The demand was ignored.

Later on the 20th, following another attack on an Austrian patrol, the Austrian regiments left the San Francesco barracks to pursue the insurrectionists up Via Milano. However their progress was hampered and finally repulsed by citizens pelting the troops with stones and roof tiles alongside a return of gunfire. They returned to barracks.  Other attempts by the Austrian regiments from the other barracks within the walled  town were also repulsed but both sides suffered injuries and fatalities.

By 21st March, the Civil Guard had seized 800 rifles from those troops who had surrendered. Emboldened by their success, they attempted to attack the San Francesco barracks but the Austrians responded firmly and it was the citizens this time who were repulsed. The wounded were brought to the Osteria del Soccorso in Via Giulini for treatment. This building still houses a bar/cafe.

By the morning of 22nd March, the Austrian army, holed up in the San Francesco barracks without food (the Como rebels had seized control of the military bakery right at the start of the uprising) and still facing a seriously hostile opposition, were ready to surrender thus giving up their regimental banner to the victors – the civilians of Como.

This was the only regimental banner lost by Austria throughout all the insurrections across Lombardy/Veneto in the tumultuous years of 1848 and 49. 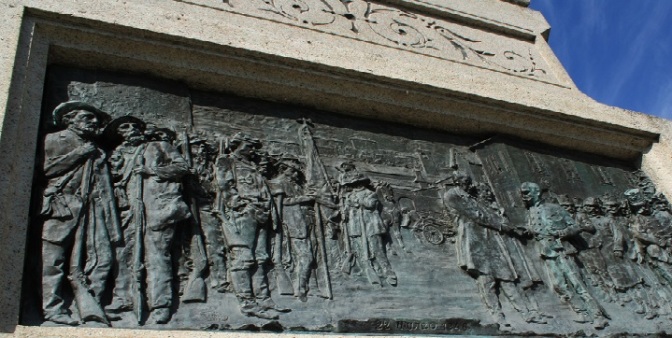 The silk industry had not yet been established in Como by 1848. The urban proletariat hardly existed at that time but Como stood out as one of the centres of popular insurrection. Why? Maybe one aspect was Como’s location as a border town, its vicinity to the Swiss Confederation, and the porosity of the borders that not only facilitated smuggling and the passage of exiles but also the exchange of political ideas and propaganda emanating from the many Italians who had fled into Switzerland. 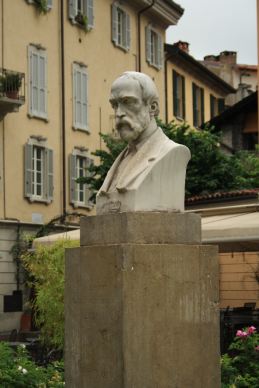 And in particular, the influence of one of those exiles – Giovanni Mazzini who through his organisation ‘La Giovine Italia’ had influenced many of the intellectuals and aristocrats in the Como area. He even tried to organise a further uprising in Como in 1849 but unification had to wait a further ten years for the combination of  the House of Savoy, the support of republican France, the political genius of Cavour and the military genius of Garibaldi to finally secure the risorgimento.

Medal awarded to participants in the Cinque Giornate revolt.

Capiaghi’s painting and many memorabilia from the ‘Cinque Giornate’ and other episodes in the struggle for independence are on view at Como’s Museo Civico Storico Giuseppe Garibaldi in Piazza Medaglie d’Oro 1. The museum, like all the other civic museums, is open from Tuesday to Sunday from 10.00 – 18.00 with an entry fee of €4.00. Note however that entry is free on June 2nd (Republic Day) and also on June 5th being the first Sunday of the month.

I am an Englishman in Como, Northern Italy - definitely both a Euro and Italophile with an interest in modern history, walks in the hills and mountains, and food and wine. I favour 'slow' tourism alongside of 'slow' food.
View all posts by comocompanion →
This entry was posted in Culture, Events, History, People, Places of interest, Politics and tagged 1848, Capiaghi, Cinque Giornate, Garibaldi, Mazzini, Risorgimento. Bookmark the permalink.