Posted on February 28, 2022 by comocompanion

For wild swimmers a warm sun glistening off clear fresh water is one of the most enticing of summer pleasures – but one that needs to be consumed with care following a minimum of preparation. For instance, how do you choose where best to take to the water? Our datafest is here to help you select your favoured destination.

The tempting prospect of a wild swim in the cool, clean and calm waters of Lake Como.

We report the data for water quality for each of the locations marked with a blue spot on the Como leg of the lake – from Como to Griante on the west and Como to Bellagio on the east.

In recent years we have tried to report on the data collected by the Italian Ministry of Health and published on their website Portaleaque. This site provides data collected over the summer months on the water quality of most coastal and fresh water bathing sites in Italy including Lake Como. Last year these results for beaches in our area of interest (the southern section of the Como leg of the lake) were not published on time probably due to the Covid pandemic. We have therefore decided to publish a bumper set of data now including the figures for the entire 2021 season running from April to September alongside those results for the preceding years of 2019 and 2020.

The epithet applied on the government site to the vast majority of Lake Como’s beaches is ‘Eccelente’  and we believe the historical data give continuing reassurance on the regularity of the controls undertaken and of the quality of the water on Lake Como’s beaches. They do however reveal some differences between sites and the risk of extraneous events producing anomalous results. For example those water purification plants in the larger centres of population do sometimes fail or find themselves unable to cope with run-off after particularly heavy downpours. Unfortunately climate change is resulting in more numerous instances of dramatic precipitation. In July of last year, for example, ferocious downpours caused flooding, physical damage and washed a mass of detritus down the mountain torrents to form a huge agglomeration along Como’s lakefront.

28th July 2021, detritus brought down by mountain streams in flood over previous days fills up the lakefront in Como

Those of you less familiar with our area may be surprised by what are called beaches. While towards the north end of the lake there are relatively long (yet narrow) stretches of lakefront that resemble a traditional beach, down in the south these are rare due to the local geology. Our area is characterised by a series of small communities nestling in valleys cut into mountains that descend steeply to the water’s edge. 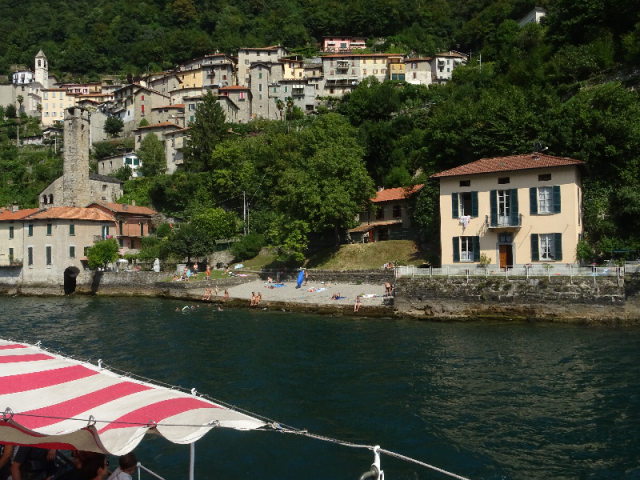 Careno, between Pognana and Nesso on the road to Bellagio, is nestled into a narrow valley with a delightful but unofficial beach besides its Romanesque church.

Beach space is often limited and sunbeds are placed close together (although Covid restrictions limited this temporarily). Most sites described as lidos do provide the option of a swimming pool with more facilities and including somewhere to eat and drink. Some of the Grand Hotels such as Cernobbio’s Villa D’Este have used even more ingenious options such as  ‘floating’ pools and certainly don’t make any compromise to comfort.

Lierna is on the Lecco leg of the lake and has a larger beach than most. It is very popular on summer weekends helped by its direct rail link from Milan.

The dedicated wild swimmer may not be interested in anything approaching the formality of a public beach and there are a number of other locations where one can easily access the water. For these locations, swimmers must use common sense and a degree of careful observation and perhaps also take note of the data from any nearby official location.

Beaches from Como to Griante 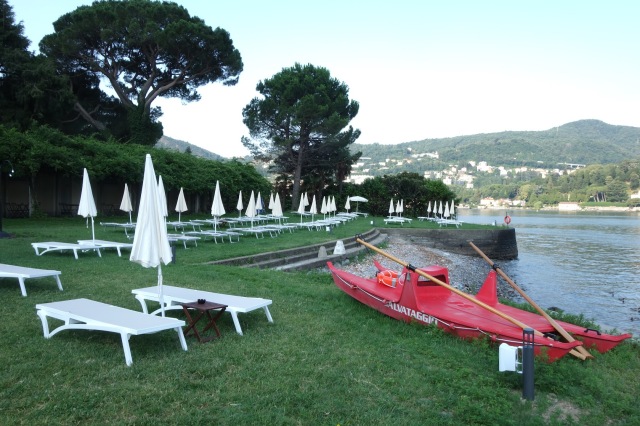 The lido in Viale Geno only recently reopened. 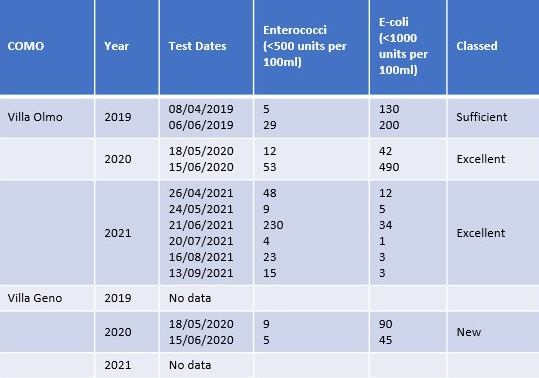 The lido at Villa Olmo also has a swimming pool as well as access directly on the lake. The lido at Villa Geno only has lake access. With both sites on the edges of the largest centre of population within our area of interest, we can expect figures to vary according to the efficiency of the local water purification plants and their ability to cope with extreme meteorological conditions.

The lido at Villa Geno has only recently been reactivated following delays in granting a licence to new management. We can only hope that the site opens fully this year given the beauty of its location and the extensive space it occupies on the lakefront. 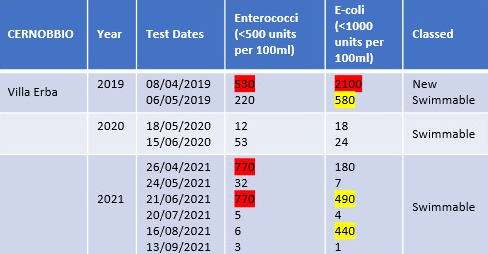 The beach monitored in Cernobbio is within the old galloping track of Villa Erba and at the mouth of the Breggia river. Upriver and just across the border into Switzerland there is a water purification plant that has had issues in the past and no doubt explains some of the poor results shown in the table above. However, somewhat unusually, the beach is not really open to the public but is used instead by a canoeing club.

For those wishing to swim in Cernobbio there is a lido on the lakefront with a swimming pool but no lake access. Guests of the Villa D’Este have use of the hotel’s attractive ‘floating’ pool over the lake.

The lido in Moltrasio offers access to the lake only.

Going north from Moltrasio there is an unofficial lido with lake access only in Carate Urio and a beach in Laglio undergoing development which has been ‘temporarily’ closed for the last three years. So the first official monitored site after Moltrasio is in Brienno.

The Brienno location is a lido offering lake access only via a series of wooden platforms for sunbathing served by a bar offering light snacks. 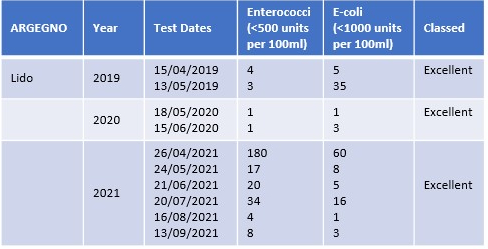 Argegno’s lido is close to the mouth of the Telo river running down from the Val D’Intelvi. It is in a beautiful location and offers both lake and swimming pool access. 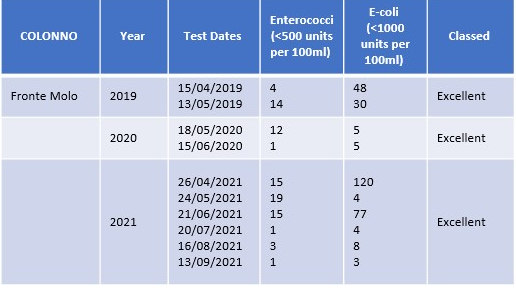 This and the nearby beach in Sala Comacina are perhaps in one of the most picturesque locations in our area with views over to the nearby Isola Comacina. Ossuccio does however seem to have a better record for water quality than its near neighbour.

7. View to Lenno and the Dosso di Lavedo 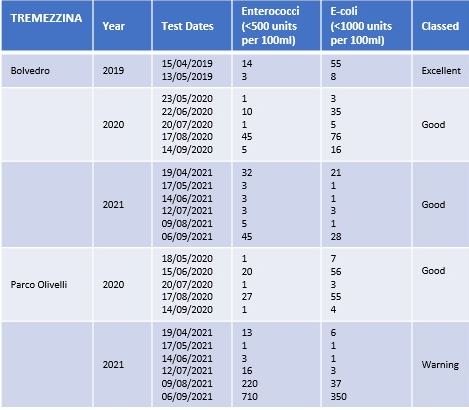 Results for Tremezzina are more varied than most with the beach in the Parco Olivelli being closed due to some pollution incident towards the end of last year’s season.

Whatever caused the poor figures for Parco Olivelli in nearby Tremezzina may also have impacted the beaches in Griante which is a pity since the figures for Banderan earlier last year were amongst the best on the lake.

Beaches from Como to Bellagio

The lido at Faggeto Lario pictured off season in uncharacteristically high wind.

Faggeto Lario’s lido offers lake access only managed by a bar that boasts a plastic free environment. The area is small but the location is glorious and the water quality consistently good. 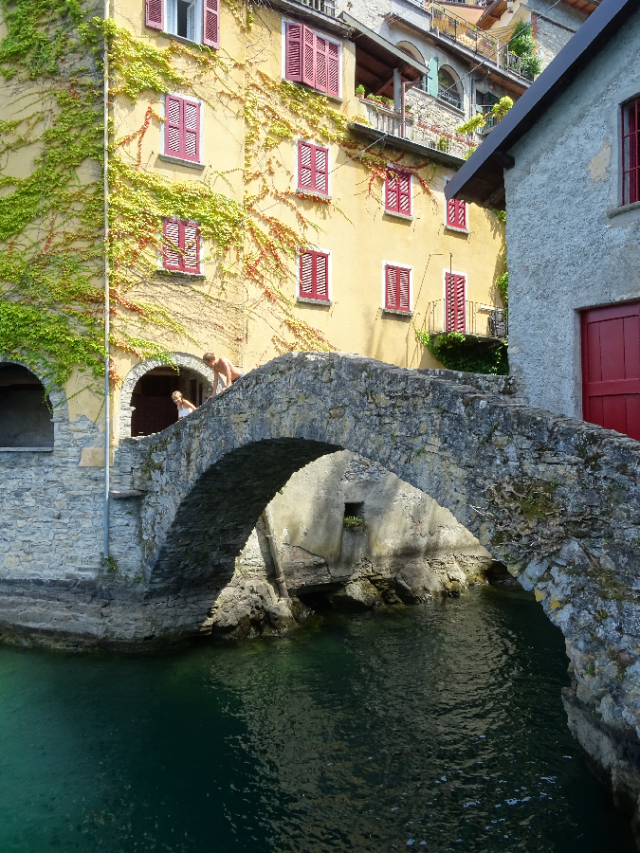 The Civera Bridge in Nesso. 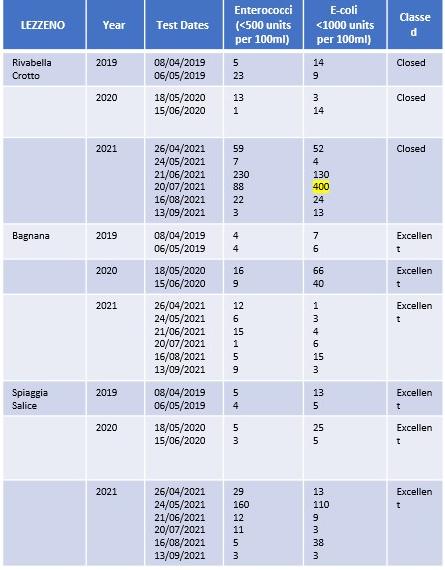 The town of Lezzeno stretches along the lakeside with three distinct beach areas. However the Rivabella Crotto site has been closed due to pollution for the last three years but fortunately the other two sites fare much better with Bagnana winning out with a more consistently good water quality.

Bellagio ‘the pearl of the lake ‘ – viewed from San Giovanni

Bellagio is described as the jewel of the lake and fortunately its two beaches also live up to this reputation. 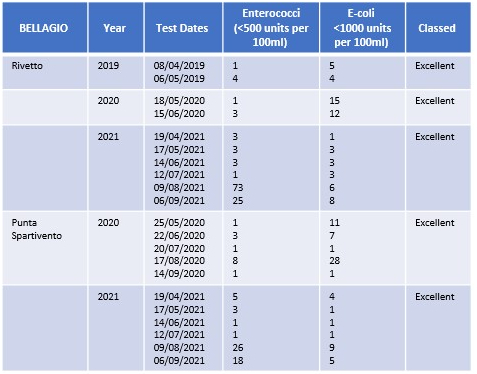 Let’s all hope for a great 2022 summer season with plenty of opportunity for wild swimming.

I am an Englishman in Como, Northern Italy - definitely both a Euro and Italophile with an interest in modern history, walks in the hills and mountains, and food and wine. I favour 'slow' tourism alongside of 'slow' food.
View all posts by comocompanion →
This entry was posted in Itineraries, Lake, Places of interest, Uncategorized and tagged beaches, e-coli, Lido, pollution, swimming, tourism, water quality, wild swimming. Bookmark the permalink.